Reese Fallon, an 18-year-old woman who planned to study nursing, was named as the adult victim who died when a gunman went on a shooting rampage through Toronto’s popular Greektown neighborhood.

The city of Toronto is devastated after the 29-year-old gunman wearing all black opened fire along the city’s popular Greektown restaurant strip late Sunday night, killing two and injuring 13 more.

The two victims were confirmed as an 18-year-old Fallon and a 10-year-old girl. Both are Canadian; Reese Fallon is from Toronto and the girl is from the greater Toronto area. The gunman, who is from Toronto, has not yet been identified.

The shooter reportedly fired indiscriminately into businesses, shot a child, and left a line of bodies strewn over a large area in Greektown. A video surfaced that appears to show the shooter, wearing a cap and carrying a bag, walking down a sidewalk when he suddenly starts opening fire.

Toronto had already been struggling with rising gun violence when the incident unfolded, leaving the country shocked and traumatized.

Here’s what you need to know about the victims:

1. Reese Fallon Was a Recent High School Graduate Who Wanted to Be a Nurse

According to CP24, Reese Fallon was “a recent high school graduate from Toronto’s Malvern Collegiate Institute, and planned to study nursing at McMaster University.”

“We are heartbroken to learn that a recent graduate of the TDSB was among those who tragically passed away as a result of last night’s violence on Danforth,” read the statement. “An engaging student, Reese Fallon graduated from Malvern CI just last month and was highly regarded by staff and loved by her friends.”

Director of Education John Malloy says the school will be open on Tuesday and supports will be made available to any students who need them. The flags at Malvern CI and all TDSB administrative buildings will also be lowered to half-mast.

A sad day for Malvern CI and the TDSB. Read a statement from Director of Education John Malloy: pic.twitter.com/tOUvUel0Fw

Fallon, from the Beach neighborhood of Toronto, was confirmed Monday as the 18-year-old woman who was shot and killed during the rampage.

Andrew Mantzios, a witness, described the shooter as having “this horrible expression on his face” as he fired, seemingly randomly, into the crowd. “And then a lady tried to run and she fell down,” he told Globe and Mail. “He turned around and shot her point blank, two or three times.”

Mantzious told Globe and mail that the woman was “executed” and added that people were “falling all over the place – maybe seven, eight, nine of them.” The shooting broke out around 10 p.m.

2. Fallon’s Sister Posted a Heartbreaking Tribute on Instagram, Saying She Was “Crushed & Broken” to Lose Her Best Friend

Fallon’s family declined to speak to reporters, but Beaches—East York MP Nathaniel Erskine-Smith shared a brief statement on their behalf.

“The family is devastated (and) asks that their privacy be respected at this time.”

Erskine-Smith told the Star that he knew her personally, adding she was “whip smart” and “cared about making a difference in the world and this is a huge loss.”

Fallon’s younger sister posted an emotional tribute on Instagram Monday evening. “Today has been the hardest because I haven’t just lost a sister I’ve lost my lifelong bestfriend and anyone who knew us knew that when we were together we were inseparable,” she wrote.

“I am crushed and broken and there won’t be one minute that goes by for the rest of my life that I won’t think of you.”

In absolute shock. These were some of Reese Fallon's best friends. Sam is right now in the hospital fighting for her life. Reese was one of the kindest people, she did not deserve to die this way. I miss her already #TorontoStrong #TorontoShooting #Danforthshooting pic.twitter.com/b3oq30LRGy

Fallon was reportedly out celebrating a birthday when the shooter opened fire on the crowd. Two of her friends were shot during the rampage and are in the hospital at this time.

Twitter user Frank Hong posted a picture of a group of friends on Twitter, with the caption: “In absolute shock. These were some of Reese Fallon’s best friends. Sam is right now in the hospital fighting for her life. Reese was one of the kindest people, she did not deserve to die this way. I miss her already.”

Witness Ali Demircan told the Star that he saw an injured woman who matched Fallon’s photograph during a break in the shooting.

“Demican said the woman, who was holding her arm where she appeared to have been shot, approached him and asked him to call 911, but the shooting started again before he could do so,” the Star reports.

“When I turned back there she was lying behind a small tree on Logan avenue. People were trying to help her and do CPR,” Demircan said.

3. A 10-Year-Old Was the Second Victim Who Was Shot Down in Cold Blood

PHOTOS: Numerous people shot along Danforth Av in #Toronto's Greektown. Reports of at least 10 victims including children. Patients are spread across several blocks in the area. Mass casualty response from @TorontoMedics @Toronto_Fire. pic.twitter.com/UK8lUHUP5l

After the chaos settled and police could get an idea of the carnage the gunman left behind, Toronto PD confirmed that “14 victims were shot with a handgun. 1 female adult has died. 1 young girl in critical condition. Suspect is dead (not included in 14 victim total).” However, they later added another victim, bringing the total to 15.

News broke of the child’s death Monday afternoon. She is from the Greater Toronto area. Police did not identify the killed 10-year-old, saying her family did not want her name release.

Jeremy Cohn, a digital journalist with Global News Toronto, wrote that all of the victims “are spread across many blocks.”

BREAKING: Multiple people shot on Danforth Av in Greektown. Victims are spread across many blocks. pic.twitter.com/PvobE1so81

“Paramedics tell CityNews the scene encompasses several blocks and a number of victims have sustained significant injuries. Six victims have been transported to trauma centres, 1 to a pediatric trauma centre and two to local hospitals while an unconfirmed number of people are being treated at the scene,” City News Toronto reports.

Toronto Mayor John Tory said he was “outraged that someone has unleashed such a terrible attack on our city and people innocently enjoying a Sunday evening.”

“We have a gun problem in that guns are readily available to too many people,” Tory said. “The police are doing their best, but they’re operating under extraordinarily difficult circumstances to deal with these guns. And we’ll see what they conclude from this case, but it’s evidence of a gun problem, clearly.”

4. Witnesses Watched Helplessly As The Gunman Seemingly Randomly Shot into Crowds of Bystanders & Groups of People Sitting at Restaurants

Police stated that it is too early to determine whether the shooting was an act of terrorism, but they “haven’t ruled it out.”

“I’m keeping everything open. Looking at every single possible motive for this; when you have this many people struck by gunfire, it’s a grave concern,”  said Toronto Police Chief Mark Saunders. “I certainly want to find out exactly what it is, so I am not closing any doors or any chapters on this. I certainly don’t want to speculate… I don’t know why he did what he did, and he won’t be able to tell us because he is deceased.”

City News Toronto wrote on Twitter that the crime scene “encompasses a large area and a number of victims have suffered significant injuries.” The mass shooting occurred in the area of Danforth and Logan Avenues.

A police news release says “a man was walking along the street on Danforth Avenue when he began shooting at groups of people several times.”

“He was probably no taller than me, wearing a black baseball cap, dark clothes. He had light skin. I think he had short facial hair. That’s all I could make out,” Young said, adding that the suspect appeared to have a pistol or handgun.

Some witnesses heard as many as 25 shots, by one account. Jessica Young, an employee at Second Cup, a restaurant near the scene of the incident, said she saw the alleged attacker: “I look to my side and see the shooter through the window. He sees me, or he sees my co-worker or someone, and points the gun and shoots through the window.”

5. The Gunman Was Found Dead in an Alley & Police Aren’t Sure If He Took His Own Life or Died In An Exchange of Fire

Faisal Hussain was identified as the 29-year-old gunman who shot 15 people – killing a teenage aspiring nurse and a 10-year-old girl – in a popular restaurant area in Toronto known as Greektown.

Saunders said it appears that the shooter died from gunshot wounds, but police were still trying to figure out whether the wound was self-inflicted. He said there was an “exchange of gunfire,” with police officers. Toronto police have confirmed that the shooter used a handgun.

Hussain’s family released a statement expressing their shock and devastation at what their son had done. “We are utterly devastated by the incomprehensible news that our son was responsible for the senseless violence and loss of life that took place on Danforth.

“Our hearts are in pieces for the victims and for our city as we come to grips with this terrible tragedy,” the statement continued. “We will mourn those who were lost for the rest of our lives.”

The SIU has identified the suspect in Toronto's deadly mass shooting as 29-year-old Faisal Hussain. CBC News has obtained the following statement on behalf of his family, who say their "hearts are in pieces for the victims." https://t.co/sY95zL1mZ0 pic.twitter.com/oSWagNYXGv

CP24 reported that a “suspicious device” was also found but didn’t clarify what it was. Authorities detonated it, the news site reported. Other news sites called this a suspicious package, and it might have been detonated merely as a precaution.

Toronto has been struggling with an uptick in gun violence. “Deaths from gun violence has jumped 53 percent to 26 so far in 2018 from the same period last year, police data last week showed, with the number of shootings rising 13 percent,” reported Reuters.

The horrific shooting comes only a few months after a van plowed into pedestrians on a Toronto street in April, killing ten people and injuring more than a dozen others. It is believed that the suspect in that massacre, Alek Minassian, 25, was motivated by “misogynistic beliefs.” Most of the victims killed in the van attack were women, according to the Cut. 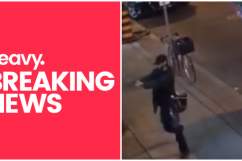