YouTube/Elizabeth Prezza Whoopi Goldberg and Judge Jeanine Pirro got into an argument over the Trump administration on 'The View'.

In a conversation on ‘The View’, Whoopi Goldberg and Judge Jeanine Pirro got into a heated argument over Trump and his administration. More specifically, the argument was about Pirro’s book, ‘Liars, Leakers and Liberals: The Case Against the Anti-Trump Conspiracy.’

Pirro said that she originally wrote the book because, as she put it, “I’ve been in the crime business for over 30 years…and I know a con when I see it…and when you start creating fake investigations, fake counter-intelligence…that’s a problem for me.”

When Pirro was asked if she thought Trump was an “ideologue who was faithful to conservative policies,” Pirro replied, “You know, I’m not here to talk about what Donald Trump is and isn’t.”

Pirro then went on to argue that “every metric” in the country was better off, since Trump has taken office. “Unemployment is lower than it’s been in fifty years. Minorities, Hispanics, African-Americans have jobs…the GDP under Obama was barely one, we’re going up to four.”

Goldberg continued, “Listen, I’m 62 years old. There have been a lot of people in office that I didn’t agree with, and I have never ever seen anything like this. I’ve never seen anybody whip up such hate, I’ve never seen anybody be so dismissive, and clearly you don’t watch the show, so you don’t know that [I don’t suffer from Trump derangement]. What I suffer from is the inability to figure out how to fix this. That’s my issue.”

Then Goldberg asked Pirro to answer a question about the deep state, but Pirro was only interested in addressing Goldberg’s earlier opinions about the Trump administration.

Pirro and Goldberg began to talk over one another about what they both believed was ‘horrible’, until Goldberg yelled, “What’s horrible is when the President of the United States whips up people to beat the hell out of people. Say goodbye. I’m done.”

Later, Pirro told Sean Hannity that Goldberg confronted her off-air. She said, “I went on thinking that we would have a discussion about the book. The truth is, that it was an attack on Donald Trump, and then on me. I sat there as Whoopi Goldberg pontificated about how horrible Donald Trump was and at one point I said ‘you know I’m here to talk about the book’ and then she went ballistic – ended the segment. She said ‘that’s it I’m done’ and what people didn’t see who were watching the show, was she yanked away from the desk where we were all sitting and she decided that she was going to end it. No one saw that, but it got worse.”

Pirro contined, “When I went off the stage, Sean, I’m walking downstairs and I said something like, Whoopi I fought for victims my whole life and she came at me as I was leaving and she said ‘F you’ in my face – literally spitting at me, ‘F you, get the F out of this building.’ And I said to her, ‘did you just say that?’ She said that’s what I said, ‘get the F out of this building’ and she was screaming at me and I’m walking out of the building like a dog who was just kicked off. So forget about what she did to me on set, which was horrific in itself but the treatment by Whoopi Goldberg is typical of what is going on in this country. The left, they invite you on to talk, they then won’t let you talk, they throw you off the show and then they throw you out of the building. And here’s the problem Sean, the problem is once one starts doing it, the rest of them are going to start doing it.”

To TMZ later that day, Pirro said, “I don’t mind four against one, I can handle it. But I don’t like being mistreated by people who invite you to have a discussion, then treat you like you’re less than human.”

Goldberg’s reference to “Trump derangement” was a direct reference to a phrase coined by Pirro, which she writes about in ‘Liars, Leakers and Liberals’.

In a visible excerpt of her new book, Pirro writes, “The left-wing liberal media have savaged not only President Trump, but everyone around him… the haters march, protest, riot, resist, obstruct, and jump onto their ninja Antifa getups, suffering from “Trump derangement syndrome.”

In the past, Goldberg has explained why she chooses not to speak Trump’s name (as seen in the video above), which is that she simply “can’t” use his name in conjunction with the word “president”.

In a CNN interview with David Axelrod, when asked if she had any words for Trump, she said she didn’t, but that she did have a message for the “people around him”.

“Change is coming, and it’s not coming because it’s even ideological, it’s coming because you’re endangering, you’re allowing things that endanger our children, our country, our air,” she said, adding, “I just want people in (power) who remember what the promise of America is. Not was, but is.” 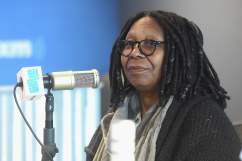 How to Watch ‘The View’ Live Online

Read More
Breaking News, Celebrities
Whoopie Goldberg and Judge Jeanine Pirro got into a heated debate over the Trump administration while Pirro was promoting her book on 'The View'.