Around 30 people were killed when Genoa’s Morandi bridge collapsed amid a thunderstorm on the morning of August 14.

ANSA reports that there are crushed vehicles will people trapped inside underneath the rubble created by the collapse. The accident happened at around 5 a.m. Eastern time. Trucks and cars were plunged on to railway lines when the middle section of the bridge collapsed during a storm. The ANSA report says that the collapse occurred during “torrential rain.” A witness, Pietro M, told the agency, “It was just after 11:30 a.m. when we saw the lightening bolt hit the bridge and we saw the bridge go down.”

The city of Genoa is located in the northwestern part of the country. The Morandi bridge connects the A10 highway which links Italy and France to the A7 highway which runs towards the Italian city of Milan. The bridge was constructed in 1967. It was last refurbished in 2016. This video shows a man screaming, “Oh God! Oh God!”

Bystander heard screaming as he witnesses a 200-metre section of a major bridge in Genoa collapse https://t.co/ikQw2XX8lg pic.twitter.com/yCpE09Cfj3

Another Italian news agency, Adnkronos, initially reported that there were “dozens dead.” While Sky News reports that there are 22 people dead. That estimate has been backed up by an Associated Press report. Officials later confirmed that 30 people had died.

The incident occurred on the day before a major Italian religious holiday, Ferrogusto, the celebration of the ascension of Mary. Due to this, officials say that bridge was busier than usual.

ANSA reports that Italian Prime Minister Giuseppe Conte is en route to Genoa to observe the rescue efforts. There are over 200 rescue workers working to the free the trapped people. The immediate aftermath of the horror can be seen here:

The AFP reports that 650 feet of the bridge “had fallen away.” A witness told Italian TV, via Reuters, that the bridge collapse was an “apocalyptic scene.” That witness said he saw “eight or nine” vehicles plunge from the bridge. That Reuters report adds that shares in the company that runs the bridge, Atlantia, had fallen 6.3 percent after the collapse.

Former Genoa soccer coach Gian Piero Gasperini, now coach of Atalanta, told the media on August 14, “When I heard about it my blood ran cold. I saw crazy images, I’ve driven over that bridge thousands of times, I have a house in Arenzano. It’s a terrible tragedy.”

This video shows the thunderstorm moving into the area prior to the collapse:

The Genoa bridge collapse comes a week after a gas tanker exploded along a highway in Bologna sending an “extremely violent shockwave” that killed one person and injured 70 more. 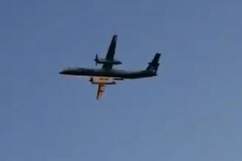 Read More
Breaking News
Follow Heavy ↓
Around 30 people were killed when Genoa's Morandi bridge collapsed amid a thunderstorm on the morning of August 14.