Heather Kobach is married to Kris Kobach, the former Kansas Secretary of State who ran for governor in 2018 as a Republican. He lost to Democrat Laura Kelly in the general election. On July 8, 2019, he announced that he was launching a campaign for the U.S. Senate.

Kris Kobach became a national figure for his aggressive support of tougher voter ID regulations as Kansas’ Secretary of State. In June of 2018, a U.S. district judge struck down a proof-of-citizenship voter registration law enacted by Kobach, arguing that it disenfranchised tens of thousands of eligible voters and was unconstitutional. During his political career, Kris Kobach has also been accused of having ties to white nationalist groups and been called a racist.

In the 2016, I was the only Kansas statewide official to endorse @realDonaldTrump for President of the United States. And, I began working with him, while others were still criticizing him. Transforming Topeka begins with shaking up the political establishment. #ksleg #ksgov pic.twitter.com/m8kowrYLO9

Heather Kobach is bothered by the public scrutiny. She told local newspaper the Wichita Eagle in 2015 that the criticism of her husband makes her “sick to my stomach. I guess I try to remember that people who criticize him, they don’t know him at all. They know a caricature of him.”

1. Heather Kobach Decided to Homeschool Their Five Daughters In Part Because of the Scrutiny Against Their Father

Heather and Kris Kobach were married in 2001. They have five daughters: Josephine, Lilly, Charlotte, Reagan and Molly.

In the phone interview referenced above with the Wichita Eagle, Heather Kobach stated that her husband’s political views have attracted a lot of criticism. She says she did not want her daughters exposed to that negativity.

That played a large role in deciding to educate their daughters at home. Heather told the newspaper, “When they read something terrible that somebody said about their daddy, I’d like to be there to explain it to them.”

2. Heather Kobach Previously Worked as an Environmental Scientist and Engineer

GettyTOPEKA, KS – AUGUST 07: Republican primary candidate for Governor Kris Kobach, and his wife Heather Kobach speaks to supporters just after midnight in a tight race with Jeff Colyer that is too close to call. Kobach was supported by President Trump against incumbent Jeff Colyer on August 7, 2018 in Topeka, Kansas. (Photo by Steve Pope/Getty Images)

Heather Mannschreck Kobach is a highly educated scientific professional She earned a bachelor’s degree in biological and biosystems engineering from the University of Nebraska in 2000.

After earning that degree, Heather went on to work for the company Black & Veatch. According to her LinkedIn profile, she worked as an environmental scientist and engineer there from 2000 until 2008. The company works to provide infrastructure plans in the energy, water and telecommunication sectors.

3. Heather Kobach Shifted Her Focus to Photography in 2009

Heather Kobach quit her job as an environmental engineer in 2009. She opened a part-time photography business called “Kobagraphy.” On Facebook, a family thanked Heather for taking engagement photos in 2013.

But the business does not appear to have its own Facebook page or current website. Heather’s LinkedIn page indicates that Kobagraphy is still operational, but there is no link to the company included there either.

It is possible that Heather’s photography business is a sole proprietorship. This type of business entity is not required to register with the Kansas Secretary of State. A search of the Business Entity Search Station in Kansas does not include Heather Kobach’s name or Koobagraphy.

4. Heather Kobach Appears to Enjoy Hunting With her Husband

Kris Kobach is an outspoken supporter of second amendment rights. His campaign website states that he is a “sportsman and an avid hunter.”

Earlier this year, Kris Kobach also helped to launch a non-profit organization called Hunter Nation Inc. According to a report in the Hutchinson News, Hunter Nation was created to “inform the public about legislation or leaders that either promote or impede hunting.”

Heather Kobach appears to share her husband’s love of hunting. He posted the photo above on Facebook in 2016 of Heather kneeling beside the very first deer she had killed. Kris wrote in the caption, “She used a crossbow during the extended Kansas archery doe season (in unit 19). When she wants some more venison summer sausage, she takes action!”

I had a great time in the Sunflower State Games 3-D archery competition with my daughter, Lilly. #ksleg #TeamKobach pic.twitter.com/tvOSZEh5rx

Heather and Kris have also been teaching their daughters how to hunt. Kris shared this photo alongside daughter Lilly in July. “I had a great time in the Sunflower State Games 3-D archery competition with my daughter, Lilly.”

5. Heather Kobach and Their Daughters Was a Consistent Presence on the Campaign Trail

As we talk to people in Ellinwood, we keep hearing a need for our state to cut taxes, solve the state spending problem & grow jobs. We will #FixTopeka and we will Make Kansas Great Again. #mkga #ksleg #TeamKobach #ksgov pic.twitter.com/WAjtGM6iDO

Heather Kobach does not appear to speak publicly very much on her husband’s behalf or give interviews. But Heather and her five daughters appeared in many photos during Kris Kobach’s campaign. She was seen speaking with potential voters at events and posing for group photos.

Kansans for Life endorsed #TeamKobach because Wink and I are committed to fighting the activist Kansas Supreme Court, advancing pro-life legislation, and defunding Planned Parenthood once and for all. #ksleg #ksgov pic.twitter.com/aaPs6Rqzr5

The entire family also appeared in an endorsement for Kansans for Life. Kris Kobach is firmly against abortion and has compared Planned Parenthood to Nazi concentration camps. The tweet above from July reads, “Kansans for Life endorsed #TeamKobach because Wink and I are committed to fighting the activist Kansas Supreme Court, advancing pro-life legislation, and defunding Planned Parenthood once and for all.” 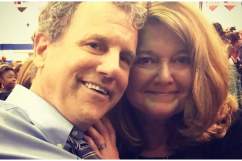