Patriot Prayer is a conservative political action group based in Portland, Oregon. The group’s primary goals are advocating for free speech and opposing big government, though critics have accused the group of being a magnet for white supremacists and alt-right organizations.

However, Patriot Prayer founder Joey Gibson has consistently denounced racism, and maintained that Patriot Prayer is by no means an alt-right group, despite the fact that white supremacists have joined their rallies in the past.

Patriot Prayer’s rally for Saturday, August 4, has drawn concern from citizens of Portland, with the police confirming that they are prepared for anything. Here’s what you need to know.

1. Founder Joey Gibson Insists it is “Not a White Supremacy Group”

In a video posted by Gibson that aimed to set the record straight about his group, he said, “I am not white. I am a person of color, so I don’t believe in white supremacy…I don’t care if you’re a Democrat, a Republican, it doesn’t matter to me. What I’m trying to do is bring people together who believe in freedom, believe in love, believe in peace, and believe in free speech.”

Gibson continued to explain that the basic tenets of his group are freedom, love, peace, and truth. “I believe that even if we get the best president in the world, it will not solve the problems we have down at the bottom,” Gibson said. “There’s so much deception, there are so many lies, and it is on both sides, extremists on both sides. So much hatred, so much anger. We do not respect people who think differently.”

“This isn’t about politics,” Gibson said. “This is about having principles, and doing what you believe is right.”

2. Patriot Prayer Has Often Been Pitted Against Left-Wing Protest Groups

Of the August 4 Patriot Prayer march, Rose City Antifa issued a statement on its intentions to protest: “We make no apologies for the use of force in keeping our communities safe from the scourge of right-wing violence … this is the time to act: Be prepared, be smart, but do not be a bystander.”

In 2017, Gibson called out for liberals to denounce antifa protestors. “Please, if your on the left speak out against these hate groups,” he wrote in a Facebook post. “Antifa doesn’t even care about fighting ‘racists’. They want to fight the republic as a whole.”

3. Patriot Prayer Has Engaged in Several Rallies, Which Have Ranged from Minimal Violence to Extensive Violence Reported

Patriot Prayer has hosted several rallies, protests, and marches since its inception as an organization in 2016. Some of these events have been entirely peaceful, while other recent events have been extremely violent.

4. On June 30, 2018, a Patriot Prayer Rally Became Violent With Antifa Protestors & Fireworks, Rocks, and Bottles Were Thrown Between Protestors

A month ago, a Patriot Prayer rally unfolded into an especially violent altercation between antifa protestors and Patriot Prayer members, as the two groups threw objects like fireworks, rocks, and bottles at one another.

The Portland Police eventually declared the situation to be a riot and proceeded to seize weapons that included knives, clubs, and chemical sprays, also proceeding to detain several protestors. The policy eventually decided to throw balls of pepper spray into the crowd, as well.

Earlier in the day, Gibson had said in a speech that the goal of the rally was to “bring light into a city of darkness.”

5. White Supremacist Jeremy Christian Was Involved at a Patriot Prayer Rally, Though Gibson Threw Him Out & Later Denounced Him

On April 29, Jeremy Christian (a man who would later kill two men and injure a third when they tried to stop him from racially harassing two teenage girls) attended a Patriot Prayer rally, loudly yelling anti-Muslim and anti-Semitic slurs. He was also reportedly making Nazi salutes.

Gibson reportedly asked Christian to leave his march, though critics later continued to correlate Christian’s presence at the rally with the hate crime he committed a month later. 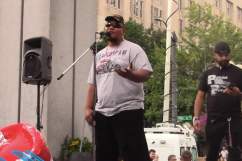 Loading more stories
wpDiscuz
0
0
Would love your thoughts, please comment.x
()
x
| Reply
Patriot Prayer is a conservative political action group based in Portland, Oregon, that has often been associated with white supremacy groups and violence.