Getty Rick 'Zombie Boy' Ganest was found dead in his Montreal apartment of an apparent suicide on August 2. The model, actor and artist would have turned 33 next week.

Rick ‘Zombie Boy’ Genest, a Canadian model known for his extensive tattoos, was found dead of an apparent suicide in his Montreal home late Wednesday night, according to iHeartRadio Canada.

Genest was often referred to as “Zombie Boy,” and was easily recognizable from the detailed bone and organ tattoos across his body, including skull-like features inked across his face. Genest currently holds a Guinness World Record for the most insect and bone tattoos on his body, according to PEOPLE. He would have celebrated his 33rd birthday on Aug. 7.

Here’s what you need to know about Genest’s life and what is known about his death:

1. Genest Was Known as Zombie Boy Long Before He Got Any of His Trademark Tattoos & Was Diagnosed With a Brain Tumor When He Was 15

According to Wikipedia, Genest was known as Zombie Boy for years before he was tattooed. He was born in LaSelle, Quebec, and was a Canadian artist, actor and fashion model.

Genest was diagnosed with a brain tumor when he was younger, according to Wikipedia. He was on a waiting list for six months, where he “contemplated his life and possible death,” before undergoing the surgery. The surgery was successful, with minimal complications, according to Platinum Ink.

“He got his first tattoo, a very fitting skull and crossbones, right after his surgery,” Platinum Ink states. “He spent most of his teenage years as a goth and an outcast, and after one particularly bad fight with his parents, he ran away from home. He began living ‘an anarchistic lifestyle’ of living on rooftops and under bridges, hitchhiking to get himself around.”

Once Genest started getting tattooed, he worked in various sideshows and freakshows across Canada as an “illustrated man,” according to Wikipedia. In one of his first public interviews in 2006 with BME’s ModBlog, Genest admitted that he preferred to be called “Zombie” instead of “Skullboy,” to which BME had been referring to him. He is often called a “living skeleton” as well as his Zombie Boy moniker.

He quickly rose to fame after featuring in Bizarre magazine. He snagged a role on the TV movie “Carny” and was discovered by Marc Quinn while Genest was working with the sideshow, “Alive on the Inside,” at Carnivàle Lune Bleue during the summer of 2010, according to Wikipedia.

2. Genest Became the First Ever Male Spokesperson for the Makeup Brand L’Oreal & Was The Face of Jay-Z’s Rock-A-Wear Fashion Label

In January, 2011 Genest modeled for the Autum/Winter collection by French designer Thierry Mugler, headlining on the brand’s website, and had another gig at a fashion show for the women’s 2011 Autumn/Winter line alongside Lady Gaga.

Genest also did work promoting Dermablend professional makeup products. The advertisement featured a video of Genest who was painted from head to toe in the brand’s concealer, completely covering his tattoos. He then proceeded to remove parts of the makeup, revealing his tattooed self underneath, asking “how do you judge a book?” The successful ad landed him a job as the first ever male spokesperson for L’Oreal, according to Wikipedia.

Genest also starred as the face of Jay-Z’s Rock-A-Wear fashion label and appeared in Vogue Japan, according to The Independent.

The suicide of friend Rick Genest, Zombie Boy is beyond devastating. We have to work harder to change the culture, bring Mental Health to the forefront and erase the stigma that we can’t talk about it. If you are suffering, call a friend or family today. We must save each other. pic.twitter.com/THz6x5JlpB

Lady Gaga is raising awareness about the seriousness of mental illness after news broke of Genest’s death. Gaga called on her 76 million Twitter followers to help change the culture and stigma surrounding mental illness.

In a series of tweets, she wrote: “The suicide of friend Rick Genest, Zombie Boy is beyond devastating. We have to work harder to change the culture, bring Mental Health to the forefront and erase the stigma that we can’t talk about it. If you are suffering, call a friend or family today. We must save each other.”

She urged those that are battling depression to reach out for help and encouraged her fans to consistently check in on loved ones that may be suffering.

“Science tells us that it takes 21 days to form a habit, if you are suffering from Mental Health issue I beckon for today to be your first day or a continuation of the work you’ve been doing,” she said, adding: “Reach out if you’re in pain, and if you know someone who is, reach out to them too.”

Gaga featured Genest in her video for the hit song “Born This Way” in 2011 and wore makeup in the music video to mimic Genest’s tattoos. 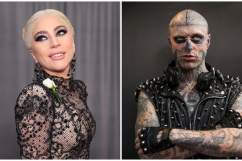 4. Dulcedo Management, an Agency Representing Genest, Posted an Emotional Tribute to the Model on Facebook Following News of His Death

An agency representing the model confirmed his death on Facebook. The cause of death has not been officially confirmed, although it appears to be suicide.

“The whole Dulcedo family is shocked and pained by this tragedy,” the statement reads. “Zombie boy, Rico, was loved by all those who had the chance to meet him and know him. Icon of the artistic scene and the fashion world, this innovator, against popular culture, has been able to charm all hearts. We received the unfortunate news at the beginning of the afternoon and members of the team have come to support his family and relatives in this dark and difficult moment. We want to present our deepest condolences and the legend will survive human. Thank you zb for these beautiful moments in your company and for your radiant smile.” [Facebook translated]

A neither brick in the wall

The model, actor and artist is believed to have passed away on Wednesday night at his home in Montreal. Reports suggest that the cause of Genest’s death was suicide, though this has not been officially confirmed.

A source told iHeartRadio Canada that Genest was found in his apartment in Montreal’s Plateau-Mont-Royal neighborhood.

“Lo we howl upon stars hung above, we soul cast down the well of stone, as fire laid betwixt two fates, of most drear less dire straights, each breath cuts ice as flesh is weighed, in front of deaths old narrow gates, where bold and brazen last rites crate,” the poem reads. “Lo heed our wish of madness, deep from os, our prayers we kissed, so stern and cold, on metal shells, release by moonlight glow.” 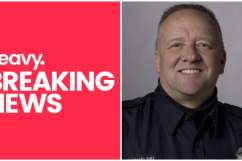 Read More
5 Fast Facts, Breaking News, Celebrities
Rick 'Zombie Boy' Genest was found dead in his Montreal apartment of an apparent suicide on August 2. The model, actor and artist would have turned 33 next week.