YouTube/XOXO Festival Sarah Jeong, a recent hire to the New York Times editorial board, has been called out for a racist tweet history.

Sarah Jeong, the most recent hire to the New York Times editorial board, has been called out by critics for the allegedly racist tweets that she’s written in the past.

Armin Navabi, founder of Atheist Republic, tweeted a series of screenshots of Jeong’s former tweets, which range with largely satirical commentary on white people. In one such tweet, she wrote, “I dare you to get on Wikipedia and play ‘Things white people can definitely take credit for,’ it’s really hard.”

On Thursday afternoon, Jeong released a statement in response to the outcry. She wrote, “I engaged in what I thought of at the time as counter-trolling. While it was intended as satire, I deeply regret that I mimicked the language of my harassers. These comments were not aimed at a general audience, because general audiences do not engage in harassment campaigns. I can understand how hurtful these posts are out of context, and would not do it again.”

Shortly after, the New York Times released a statement of its own, which read, “We hired Sarah Jeong because of the exceptional work she has done covering the internet and technology at a range of respected publications. Her journalism and the fact that she is a young Asian woman have made her a subject frequent online harassment. For a period of time she responded to that harassment by imitating the rhetoric of her harassers. She sees now that this approach only served to feed the vitriol that we too often see on social media. She regrets it, and The Times does not condone it.”

The New York Times went on to confirm that it was aware of these tweets prior to hiring Jeong, and have confirmed that they will be moving forward with her hiring.

Our statement in response to criticism of the hiring of Sarah Jeong. pic.twitter.com/WryIgbaoqg

Several days later, The Daily Caller noted that a search of “cops” and “police” on Jeong’s Twitter revealed another slew of tweets. In one tweet Jeong declared, “Cops are assholes.” In another tweet, she wrote, “If we’re talking big sweeping bans on shit that kills people, why don’t we ever ever ever ever talk about banning the police?”

On August 8, another round of tweets were found in which Jeong compared Trump to Hitler. In addition to that, Jeong also tweeted “f*ck the police” on several occasions, as well as “f*ck white women” during the 2016 election.

Jeong is a Harvard Law School graduate who tweeted that “white men are bullshit.” Here’s what you need to know.

1. She’s Written For a Variety of Sites, Including The Verge, The Atlantic, The Washington Post, and The New York Times

Jeong has written for a series of prestigious publications in the past, particularly in the realm of tech and security. In 2016, she wrote a four-part series for The Atlantic on surveillance, privacy and rights in the digital age.

For The Washington Post, Jeong wrote about another illicit message scandal: that of Anthony Weiner’s sexting scandal.

Jeong wrote, “Weiner’s genitals are not really an attractive rallying cry for free speech activism, but they kept coming up during these policy debates. After all, it would be absurd to imprison a tabloid reporter for screencapping the tweet that Weiner himself had sent out. And it wasn’t just the tabloids: The picture made it onto late-night TV shows, and through them, into the Sundance Grand Jury prize-winning documentary ‘Weiner.’ Weiner’s penis used to be the premier example of what isn’t revenge porn, because it was newsworthy — not exactly the most high-minded type of news, but it was still a matter of public concern. And besides, a United States congressman’s errant tweet didn’t look anything like a jerk humiliating their ex-partner.”

Jeong was named to Forbes 30 Under 30 Media list in 2017 while she was a contributing editor to Motherboard and Vice Media. Of her accolade, Forbes wrote,

“Journalist and lawyer Sarah Jeong writes about tech, policy and law. She is the author of “The Internet of Garbage” and has bylines at most national publications. She edited the Harvard Journal of Law & Gender and worked at the Electronic Frontier Foundation. She is a Poynter Fellow in Journalism and a fellow at the Internet Law & Policy Foundry.”

Please look forward to sober, much-needed opinions such as "I still hate my Tamagotchi" and "I don't know why Golduck is called Golduck when it's blue"

Jeong is no stranger to Twitter conflict. On her own blog, Jeong took the time to explain another Twitter feud she got into in January. Jeong wrote,

There was a ridiculous and unholy Twitter spat going on two years ago. The result of that spat was that an absurd number of allegations about who is or isn’t supportive of rape victims were thrown around, primarily by people who were not survivors themselves. Sarah Kendzior ended up being mocked for speaking about her threats, Megan Erickson was accused of being a terrible hater of survivors, and apparently I am also now accused of hating survivors.

In most of these cases, the truth of what was said was completely blown out of proportion. In my case, Connor Kilpatrick’s anger at another man (Rusty Foster) was instead directed at me for some unknown reason, resulting in Connor making up a bunch of weird lies about me out of whole cloth.”

4. In the Tweets That Have Surfaced, Jeong Calls to #CancelWhitePeople

Are these racist?
These are tweets by Sarah Jeong who was just hired to the NYT editorial board. pic.twitter.com/B3P7ay8QNR

In the tweets that Navabi shared, Jeong says a series of defamatory comments about white people. “I just realized why I can’t stand watching Breaking Bad or Battlestar Galactica,” Jeong tweeted. “The premise of both is just ‘white people being miserable.'”

In another tweet, Jeong wrote, “Are white people genetically predisposed to burn faster in the sun, thus logically being only fit to live underground like groveling goblins”

In still another tweet, Jeong referenced the extinction of white people, writing, “White people have stopped breeding. You’ll all go extinct soon. This was my plan all along.”

5. Twitter Has Exploded In Response to Jeong’s Tweets, Largely Pointing Out What They Think Is Hypocrisy

Twitter users have responded to Jeong’s tweet history with a variety of emotions. One user tweeted, “I kinda agree about Battlestar Galactica.”

Another tweeted, “She’s not very good at intersectionality. As a wealthy, privileged Asian, she has zero claim to the requisite victimhood status needed to be accepted by her progressive counterparts? Unless she is transitioning into a boy named Bruce, she might as well be a whitey.”

She’s not very good at intersectionality. As a wealthy, privileged Asian, she has zero claim to the requisite victimhood status needed to be accepted by her progressive counterparts? Unless she is transitioning into a boy named Bruce, she might as well be a whitey.

Yet another tweeted, “Absolutely they are racist. Replace the word white with black and see what the responses would be to these tweets. They are bigoted in every sense of the word. Replace white with hispanic, muslim, you name it. It’s hate filled in every sense.”

Another user pointed out the false logic of claiming that her tweets are irrelevant since they are from five years ago, writing, “So if I tweeted ‘I hate black people and hispanics’ let’s say, 5 years ago, it’d be okay because it’s an old tweet? You see the problem with that logic?” 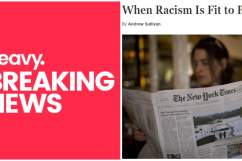