John McCain’s oldest daughter, Sidney McCain, stays out of the spotlight more than many of his other children. Sidney McCain (who sometimes goes by just “Sid”) is  the third oldest of John McCain’s seven children: he had three daughters and four sons. She says she was the most rebellious of his children, pushed his boundaries the most, and loved debating her dad. She’s happily married and living in Milwaukee after spending many years working for major record labels. Here is what you need to know about Sidney McCain.

1. Sidney McCain, the Only Child Born to John McCain & His First Wife, Carol Shepp, Was 9 Months Old When McCain Was Captured

Sidney McCain, the daughter of Sen. John #McCain along with his other children Doug, Jimmy & Jack greet people as they pay their respects to their father. pic.twitter.com/DLgDPd33Ja

Sidney McCain, 51, is John’s third-oldest child, but she is the only daughter born to him and his first wife, Carol Shepp. When John McCain was married to Carol from 1965 to 1980, he adopted her sons from a previous marriage: Doug and Andrew. Then they had Sidney. After he married Cindy McCain, they had three children of their own — Meghan, Jack, and Jimmy — and adopted Bridget.

Sidney was only nine months old when her father was captured. She told The New York Times that because she was so young at the time, she didn’t really remember his absence. But she does remember his return: “I remember my dad just squeezing me and not wanting to let me go. It was very overwhelming at the time.”

But once he returned, she and her dad grew very close. She said he was always supportive, Milwaukee Mag reported.

2. Sidney McCain Is Married to Jason Sweet & Doesn’t Consider Herself a Republican

Sidney, who now lives in Bay View, Milwaukee, will be speaking at her dad’s national memorial service, WISN 12 News reported.

Last year, she told Milwaukee Mag that she moved back to Milwaukee because her husband, Jason Sweet, is from there. She said they first met in New York City at a bar, dated, and fell in love. She never originally intended to move to Milwaukee, but then she was laid off from her job with EMI doing label acquisitions.

She said: “I had gone as far up the corporate ladder as I could. I got loosely offered a job in L.A., and I didn’t want to live in L.A., so we made the decision to move. We thought of three cities: New Orleans, Raleigh, N.C., and Milwaukee. So we thought let’s give Milwaukee a shot.”

3. Sidney’s Mom Raised Her & Her Brothers Alone While John Was a POW, & John Paid Sidney’s College Tuition When He & Carol Divorced

GettySIdney is pictured here – far right – with Cindy McCain and the rest of John McCain’s children.

Sidney’s mother, Carol Shepp, has a long history with John McCain. They married on July 3, 1965 in Philadelphia. The very next year, he adopted Douglas and Andrew. In 1966, they gave birth to their daughter, Sidney. After he was shot down over North Vietnam in 1967 and spent five-and-a-half years as a prisoner of war in North Vietnam, she raised their children with the help of friends and family.

Los Angeles Times journalists discovered that John and Carol were still living together in January 1980, after he and Cindy had been dating for nine months. John and Cindy married five weeks after Carol and John were divorced. John McCain regretted his actions during that time period. He said that ending his first marriage was “my greatest moral failure.”

The divorce itself was amicable and John gave Carol full custody and agreed to pay alimony and child support, along with Sidney’s college tuition.

Despite the amicable divorce, Sidney and her brothers did not attend John and Cindy’s wedding in 1980, People reported.

In May 2018, Sidney recalled her parents’ breakup, People reported. “It caused quite a rift within the family,” she said.

4. Sidney McCain Has Worked as the VP of Major Record Labels & Is Now a Promotions Director for a Radio Station in Milwaukee

While a member of the Jerky Boys,our first publicist was Sid McCain,John’s youngest daughter. I got to hear great stories about this man who proudly served our great country in the Vietnam war. RIP pic.twitter.com/4Z2h1F5sVA

In 2007, The New York Times reported that Sidney worked in the music business for years and had been a registered Democrat “until recently.”  Milwaukee Mag shared that she had been a “bigwig” in the music industry. She worked as the VP of major record labels, including EMI. In 2017, she took a job as the promotions director of WMSE-FM radio in Milwaukee.

She told Milwaukee Mag: “My previous job was almost like selling widgets. Music wasn’t creative; it wasn’t fun. It was about how many records the band sold. Being at WMSE is an open field. We can basically do anything we want. And my whole goal is just to have us affiliated with everything in Milwaukee that’s cool.”

She originally got into the music business when she was a college DJ and interned with MTV. Her first job was at ATCO Records, and AC/DC was doing promos. According to her LinkedIn profile, she worked for 4 years with EMI as a VP of Label Acquisitions, one year with EMI as a marketing consultant, and 10 years with V2 Records as the GM in Canada and the head of the Media Department. She also worked for nearly three years for Capitol Records as the senior director of media.

She told Milwaukee Mag: “Angus Young came out and sat with me in the reception area every day. He was not creepy; he was just really cool. We would chat and eat pizza, and I thought, ‘I am never doing anything else in my entire life.'”

She said she doesn’t volunteer to people that she’s John McCain’s daughter, because they treat her differently after they know. But if they ask, she tells them.

Never forget asking Sid McCain, wonderful record company publicist, long before anyone knew much about AZ @SenJohnMcCain, if she was any relation, as at the time I was a big fan. She said, "He's my father."

You can listen to an interview with her and WMSE below:

5. Sidney Liked to Debate Her Dad & Considered Herself the ‘Boundary Pusher’

As a child, she often challenged her dad’s authority and still liked to debate him on issues as an adult. Grant Woods, former chief of staff for McCain, told The New York Times: “I think she stretched him a lot. … Sidney has been very involved in the entertainment industry and taken him to the award shows even though her interests have been quite divergent from his. He is very close to her as well.”

Sidney referred to herself as the “boundary pusher.” “In high school I was very rebellious,” she told The New York Times. “I needed to look at all sides. At least he would hear me out.”

Sidney was close to her father and has been seen in a number of public appearances since he passed away. She was seen yesterday, following her father’s casket and attending his memorial service at the Arizona State Capitol. 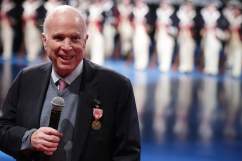