This is not how restaurant diners want to imagine their food being prepared. The video above was shot at a Little Caesars pizza franchise in Fort Wayne, Indiana. It shows a young worker spilling food and running his hands all over his face and head before touching the dough. The video was posted to Instagram Live, and then later shared on YouTube where it has been viewed more than 58,000 times. The restaurant has since confirmed that the worker was fired.

In the beginning of the video, the male worker is seen joking around with a female colleague. He is holding a drink in his hand. It appears to be some sort of dessert, possibly ice cream, because when he spills it all over his hand, the mixture appears solid.

The male worker steps out of the frame for a few seconds. He comes back with a napkin that he uses to wipe off his face and hands. His colleague is seen wiping down the counter; she can be heard reprimanding him for making a mess “all by the dough and sh*t.”

The phone falls over, and the young man props it back up. Then, without washing his hands or using gloves, he starts kneading the dough. About 30 seconds later, he sets the dough down on the counter and runs his hands over his head, seeming to check his reflection on the screen. Again, without washing his hands, he goes back to preparing the dough. He touches the phone several more times throughout the video.

A corporate spokesperson for Little Caesars told WANE-TV in Fort Wayne that the worker had been fired. The company’s Director of Communication, Tina Orozco, issued this statement:

“Little Caesars maintains a zero-tolerance policy against any violations of professional conduct. This is a highly unusual, isolated situation at a store locally owned and operated by a franchisee. The franchise owner took immediate action to investigate this matter and has terminated the employment of the individual involved in the incident.”

The Fort Wayne Allen County Department of Health is also investigating the incident.

Viewers Described the Worker’s Actions as ‘Gross,’ ‘Vomit-Provoking’ and ‘Disgusting’

The public quickly condemned the actions in the video, with some stating that this is why they do not eat at restaurants. Some of the comments included:

Hillary McCarty: “GROSS!! Not surprised though if the kids are being left unsupervised in the store, that this would happen. OMG yuck…Maybe it’s not the sauce that always makes me feel sick when I eat the pizza from here, probably the hair product and dirty hands.﻿”

Alpha Male: “This is one of the biggest reasons why I quit eating fast food and /or carry out. These malcontents have no respect for others when it comes to food handling or prepping. I am willing to go as far as saying he most likely does not wash his hands after using the facilities either.﻿”

The worker seemed to receive the most criticism for touching his hair. But it’s worth noting that the filthiest thing he touched would have been the smartphone. The phone fell over multiple times during the recording, prompting him to set it back up.

Research has shown that our smartphones may carry 10 times more bacteria than a toilet seat. Susan Whittier, director of clinical microbiology at New York-Presbyterian and Columbia University Medical Center, told TIME that dangerous pathogens including E.coli can build up on phones. People are encouraged to wash their hands often and to never take their cellphone into a bathroom. 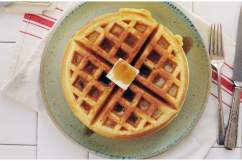