Hurricane Florence is currently making its way across the Atlantic and has set its eye on the Carolina coast, according to FOX News. The Category 4 storm is said to be bringing with it 130 mph winds and upwards of 40 inches of rainfall.

To cope with this worrisome situation, the internet has seen fit to take Hurricane Florence and provide comic relief through a series of memes.

Of course, these memes aren’t referencing the damage that Hurricane Florence is predicted to inflict on North and South Carolina, but rather the many puns and pop culture references that online users have concocted.

The most common references have been to Florence Welch, who is the lead singer of the group Florence + The Machine. The singer’s powerful voice and stage presence has provided the perfect meme outlet for the incoming hurricane, and users have been quick to draw the comparison.

This is especially the case with the Florence + The Machine track that’s titled, ironically enough, “Hurricane Drunk.” Check out the memes below.

FLORENCE WELCH IS A VIRGO AND IT’S VIRGO SEASON. THAT’S WHY THIS HURRICANE IS THRIVING IT ALL MAKES SENSE NOW. pic.twitter.com/xASwEfJ8rZ

let's settle this. which florence is more iconic??

rt for hurricane florence
like for florence welch pic.twitter.com/qFi5I3XICo

I imagine Florence Welch having a dream about this hurricane and then creating her band. She must be having deja vu. @flo_tweet pic.twitter.com/SUmKNMX4Lm

Fantastic #USA already named a hurricane after you #HurricanefFlorence @flo_tweet
Have a great tour x pic.twitter.com/Pw9zToUhPS

There have also been a few memes with other women named Florence, including Florence Henderson, the actress who starred in The Brady Bunch, and Florence Jean Castleberry, the character played by Polly Holliday on the TV series Alice Doesn’t Live Here Anymore.

“5 day cone and rainfall projections. Thank goodness we’re ‘only’ in the 4-10″ range,” wrote one user. “Am I the only person who keeps picturing Florence Henderson every time the hurricane comes up?”

5 day cone and rainfall projections. Thank goodness we're "only" in the 4-10" range. Am I the only person who keeps picturing Florence Henderson every time the hurricane comes up? pic.twitter.com/6BtAnmBAEi

(I know it’s stupid, but when I thought of it I had to make it). pic.twitter.com/KuX7ywpq5f

A shout out to the @CBS sitcom Alice (now airing on @AntennaTV ) with this #HurricaneFlorence meme.

Stay safe, east coast! Be sure to follow @weatherchannel for up to the date information on Hurricane Florence. pic.twitter.com/JkduNsXgFh

There are also several memes that see television characters attempting to push Hurricane Florence away from them in a panic. “Take Hurricane Florence and push it somewhere ELSE!” reads one post, with a photo of Patrick from Spongebob Sqaurepants doing just that.

Other characters who are desperate to push the storm include Ross, the character played by David Schwimmer in Friends. These have been lumped in with memes and gifs that summarize how nervous citizens are for the impending storm.

some fresh hurricane florence memes from someone in the path of the storm pic.twitter.com/v66VjZWIc9

me when i see funny hurricane florence memes pic.twitter.com/SF3b5rg5AG

@KendallRaeOnYT can you help me solve the mystery of this meme? Seems like a show that predicted hurricane Florence. pic.twitter.com/MVRNij9C2V

This is going to be me ? #HurricaneFlorence #meme pic.twitter.com/5IWdPeatty

Yo I’m weak at the Hurricane Florence memes and tweets and jokes but fr my anxiety is about to go through the roof like these fuckin winds but I’m still laughin hELP pic.twitter.com/dRTkYXVXtb

The severity of the storm, which has reached Category 4, has also given the meme treatment. A recurring meme has been taking the premise of Avengers: Infinity War, in which the titular heroes attempt to find a timeline where the win over Thanos, and discover that there’s only one.

Other references include the 1990 miniseries It, starring Tim Curry as the demonic clown Pennywise, and Flo, the character played by actress Stephanie Courtney for the Progressive commercials.

How does a Kansan prep for a hurricane? Make memes. #HurricaneFlorence #Florence pic.twitter.com/lTbbpo1IEG

Steve Goldstein, the liaison for FEMA’s National Oceanic and Atmospheric Administration, told FOX that the storm is forecast to stall once it hits landfall before turning slightly south and heading down the coast towards the Carolinas. An estimated 5.4 million people are in its path.

President Donald Trump declared states of emergency for North and South Carolina and Virginia, and all three states have ordered mass evacuations along the coast. 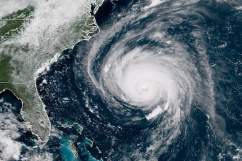