Getty Jack and Jimmy McCain are on the left.

John McCain will be laid to rest on Saturday, September 1. The Senator passed away on Saturday, August 25, after being diagnosed with brain cancer in 2017. McCain is survived by his wife, Cindy, seven children, five grandchildren, and his 106-year-old mother, Roberta.

Over the past few days, the McCain family has been front and center as they mourn the loss of John and prepare for his funeral and subsequent burial. Over the years, John and his wife, Cindy, have done their best to keep their kids out of the spotlight, despite his political career. In fact, one of the few times that people got to know McCain’s kids was back when he ran for president in 2008.

Out of his seven kids, Meghan McCain is the only one who is well-known, as she has pursued a career in daytime talk; she is currently a co-host on The View. With all of the attention on the McCain family, many people are curious to learn more about McCain’s seven children.

Here’s what you need to know about where McCain’s kids went to school:

John McCain adopted Doug Shepp McCain and his brother Andrew in 1965. Doug attended Orange Park High School before he obtained his Bachelor of Science degree from the University of Virginia. After college, he joined the Navy, becoming a pilot, according to the New York Times.

These days, Doug, who is a father of two, works as an airline pilot for American Airlines. According to his LinkedIn page, he has also worked as a financial advisor since 2010.

Andrew McCain was also adopted by John McCain in the 60s. He graduated from Vanderbilt University, and went on to work for Hensley Beverage Company.

He is currently the President and Chief Operating Officer of Hensley Beverage Company.

“Andy’s responsibilities consist of overseeing all aspects of the company which includes managing the operations; finance; treasury; accounting; strategic planning; information technology; and sales and marketing functions of the company. Andy received his Bachelor of Arts in Mathematics, 1984, and an MBA, 1986, both from Vanderbilt University,” reads his bio on Vanderbilt’s website.

Sidney McCain, 51, calls Milwaukee, Wisconsin, home. After graduating from
Long Island University, she got into the music industry, working for Capitol Records in the late 90s, and then moving on to V2 Records, where she held various positions through 2007.

According to her LinkedIn page, Sidney began working as a marketing consultant for EMI in February 2007, before becoming doing VP Label Acquisitions for the company, a position she held through 2013. Shortly thereafter, she moved to Milwaukee with her husband.

“My husband, Jason Sweet, is from Milwaukee. We met in New York City at a bar. We dated, and I fell in love. Milwaukee was never on my list of cities to visit. I got laid off from my job – I was working for EMI doing label acquisitions – and it was time for a change. I had gone as far up the corporate ladder as I could. I got loosely offered a job in L.A., and I didn’t want to live in L.A., so we made the decision to move. We thought of three cities: New Orleans, Raleigh, N.C., and Milwaukee. So we thought let’s give Milwaukee a shot,” she told Milwaukee Mag back in 2014.

She currently works as the promotions director for WMSE Radio Station.

Jack McCain Graduated From the Naval Academy & Studied at Georgetown

John “Jack” Sidney McCain IV is one of four children that John McCain had with his second wife, Cindy McCain.

Jack went to the Naval Academy, graduating in 2009. He became a Navy lieutenant and a helicopter pilot.

In 2013, Jack married Air Force Reserve Captain, Renee Swift, whom he met while he was stationed in Guam. In 2016, the Navy Times reported that Jack was studying for his master’s degree at Georgetown University.

That same year, Jack and Renee welcomed their first child together.

Jimmy McCain Enlisted in the U.S. Marines as a Teen

Jimmy McCain followed in his dad and brother’s footsteps and joined the military. As a teenager, he enlisted in the U.S. Marines. He went on to serve in Iraq and later went to Afghanistan, but his parents chose to keep his service a secret.

“We really never talk about our sons. We have two sons in the military but we never talk about it, if that’s all right. I am so proud of both of them,” John McCain told Fox News back in 2008, according to the Independent.

Meghan McCain is the oldest child of John and Cindy McCain. She was born and raised in Phoenix, Arizona, and attended Xavier College Preparatory, before heading to college. She obtained her bachelor’s degree in art history from Columbia University.

She started getting attention back in 2007, when her blog, McCain Blogette, started going viral. She has been on the campaign trail with her dad, and has been his biggest fan for all of her life.

A former Fox News contributor, Meghan McCain is currently a co-host on The View. In November, Meghan married her husband, Ben Domenech, in Arizona. It was important for Meghan to have her dad walk her down the aisle.

“The day was here and her dad was here, which was the most important thing,” Meghan’s mom, Cindy McCain, previously told People Magazine.

According to a page on the university’s website, McCain studied speech and hearing science
health solutions.

“Last summer, Senator John McCain shared with Americans the news our family already knew: he had been diagnosed with an aggressive glioblastoma, and the prognosis was serious. In the year since, John has surpassed expectations for his survival. But the progress of disease and the inexorable advance of age render their verdict. With his usual strength of will, he has now chosen to discontinue medical treatment. Our family is immensely grateful for the support and kindness of all his caregivers over the last year, and for the continuing outpouring of concern and affection from John’s many friends and associates, and the many thousands of people who are keeping him in their prayers. God bless and thank you all,” read a statement from the McCain family. 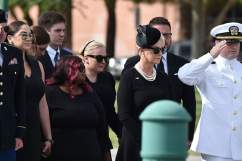 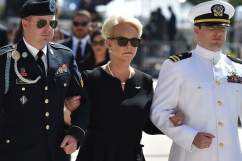 Loading more stories
wpDiscuz
0
0
Would love your thoughts, please comment.x
()
x
| Reply
John McCain is survived by his 7 children. Here is all you need to know about their educations and current jobs.