With Virginia’s governor and lieutenant governor both facing scrutiny on separate issues, the question has been raised as to what happens if both men resign from their positions. According to the Virginia constitution, the order of succession for the executive branch of the state government would mean the state’s attorney general would take over the governor role.

The next possible successor to the governor’s seat is the speaker of the House of Delegates, according to the Virginia constitution. “If the Attorney General is ineligible to serve as Governor, the Speaker of the House of Delegates, if he is eligible to serve as Governor, shall succeed to the office of Governor for the unexpired term or serve as Acting Governor,” the constitution states.

The last level of succession would call for the House of Delegates to appoint a replacement.

Governor Ralph Northam is facing calls to resign after a racist yearbook photo from his time in medical school was published. The photo, featured on his yearbook page, shows two men, one wearing a KKK hood and robes and the other wearing blackface. Northam initially said he was one of the men in the photo, but then said he was not in the 1984 picture. But Northam admitted to once wearing blackface as part of a Michael Jackson costume.

Northam, a Democrat, has resisted the calls for his resignation and, according to CNN, is trying to fight for time to prove he was not in the racist photo so he will not leave office as a “racist for life.” Northam was elected as part of a blue wave in Virginia in 2017. His term is not set to end until 2022.

Lieutenant Governor Justin Fairfax, meanwhile, is facing scrutiny of his own after Big Leauge Politics, the same right-wing website that first published the Northam photo, wrote about a woman’s accusation that Fairfax sexually assaulted her in 2004. Fairfax, also a Democrat, has strongly denied the accusation and has called it a “smear,” while questioning the timing of the allegation being made public.

As of now, neither man appears ready to resign, and the pressure to step down is much more intense on Northam, leaving the likelihood of both men leaving office a minimal possibility. But if it was to happen, here is how things would shake out:

Attorney General Mark Herring, who was re-elected in 2017 with Northam and Fairfax as part of the Democratic ticket for statewide offices, would be the first in line to take over the governor’s office if both the governor and lieutenant governor stepped down. Herring, 57, was first elected to the attorney general position in 2014.

He is a former town attorney in Lovettsville, Virginia, ex-member of the board of supervisors in Loudon County and was a state senator from 2006 to 2014. He also ran a law firm, The Harring Lqw Firm, in Leesburg.

Herring is already a declared candidate for the 2021 Virginia gubernatorial election. Northam will not be able to run for re-election even if he remains in office because Virginia’s constitution does not allow for consecutive terms. 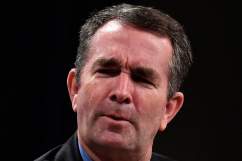 Gov. Ralph Northam: I Am Not Either of the People in the Photo

If Herring Was Unable to Take the Interim Governor Role, the Virginia House Speaker Would Be Next in Line

If for some reason Herring was not able to take the governor’s office after the resignation of Northam and Fairfax, then the Speaker of the House of Delegates would be next in line to take the role. The Virginia House is currently controlled by Republicans and Speaker Kirk Cox would be the interim governor.

Cox, 61, has served in the House of Delegates since 1990. He was the majority leader from 2010 to 2018, when he was named as speaker. Cox is a retired high school government teacher. 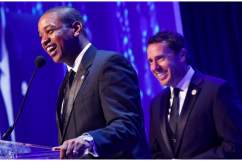 Another Scenario Could See Fairfax Taking the Interim Spot, Appointing a New Lieutenant Governor & Then Stepping Down to Let That Person Take the Seat

Virginia Lieutenant Governor Justin Fairfax presides over a session of the state senate inside the capital building in dowtown Richmond, on February 4, 2019.

There is one other, even more unlikely, scenario that could play out. If Governor Ralph Northam decided to resign and Lieutenant Governor Justin Fairfax took over the office, but then also decided to step down, he could first appoint someone to replace him as lieutenant governor. That person would then ascend to the governor’s seat at the time of Fairfax’s resignation.

One Va. lawmaker texts me a truly bonkers scenario:

Some have suggested that Democrat Tom Perriello, who lost to Northam in the primary ahead of the 2017 election, could be a candidate to be appointed as lieutenant governor and then take over the governor’s office if things played out that way.