The Senate has formally rebuked President Trump’s declaration of a national emergency at the southern border. The final vote, at 59 to 41, means that 12 Republicans voted with Democrats to pass the resolution to terminate the national emergency.

Senate votes 59-41 final passage on bill to block Pres Trump's National Emergency declaration for southern border wall construction funding. @POTUS has said he will veto the measure and it will not be overridden. pic.twitter.com/J3Ffg5rsIc

President Trump followed through on a promise to veto the bill, which became the first veto of his presidency. Immediately after the vote, he tweeted a single word, in all caps: “VETO!”

Earlier in the day on March 14, the president took to social media to urge Senate Republicans to vote with him. “A big National Emergency vote today by The United States Senate on Border Security & the Wall (which is already under major construction). I am prepared to veto, if necessary. The Southern Border is a National Security and Humanitarian Nightmare, but it can be easily fixed!”

A big National Emergency vote today by The United States Senate on Border Security & the Wall (which is already under major construction). I am prepared to veto, if necessary. The Southern Border is a National Security and Humanitarian Nightmare, but it can be easily fixed!

Republican Senator Mike Lee introduced a bill on March 12 to try to avoid this confrontation with the president. His proposal would have amended the National Emergencies Act by limiting the executive branch’s power to declare them in the future. One of the main points was that a future national emergency would expire after 30 days unless Congress voted to extend it. In return, GOP senators would allegedly support the current national emergency. But President Trump dismissed the idea.

According to the National Emergencies Act, the House and Senate need two-thirds of its members to vote to override the president’s veto in order to nullify the national emergency. Neither chamber appears to have the votes to do that at this point. But the Senate vote blocking the national emergency is certain to be used in arguments as the matter is debated in the courts.

How did we get here and how did Senate Republicans explain their reasoning ahead of the vote?

1. The House Voted to Block the National Emergency on February 26, 2019, With 13 Republicans Voting With Democrats to Approve the Measure

The House voted to block President Trump’s national emergency on February 26, 2019. Representative Joaquin Castro of Texas sponsored the joint resolution, which passed mainly along party lines in a vote of 245 to 182. Thirteen Republicans joined with Democrats to approve the measure:

One of those Republicans, Rep. Will Hurd, represents a district that includes more land along the border with Mexico than any other member of Congress– more than 800 miles. He has pushed for more security agents and technological measures to secure the border but has stated that a physical barrier is not the most effective measure. 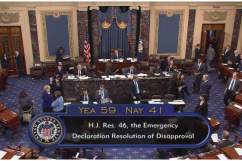 2. Senate Republicans Including Rand Paul & Susan Collins Argued That the National Emergency Was Unconstitutional Because the Power of the Purse Belongs to Congress

Congress needs to fund border security no question but no president should go around Congress. I will continue to support the Constitution and I hope you will support me in that battle. pic.twitter.com/BV4TiiU9xc

Senate Republicans such as Rand Paul of Kentucky and Susan Collins of Maine argued that the issue came down to presidential versus congressional powers. The Constitution grants Congress the power of the purse. In declaring the national emergency, President Trump planned to shift funds that Congress had already appropriated to other projects. This has made some lawmakers nervous because of the precedent it could set. House Speaker Nancy Pelosi even warned that a future Democratic president could use the precedent to declare national emergencies to deal with gun violence or climate change.

Senator Paul explained in an op-ed published on Fox News’ website that he could not apply a different standard to President Trump than he had for President Obama. During the previous administration, lawmakers argued that President Obama had overstepped when he used executive powers to protect hundreds of thousands of undocumented immigrants, specifically DREAmers, from deportation.

Repubs must not allow Pres Obama to subvert the Constitution of the US for his own benefit & because he is unable to negotiate w/ Congress.

Obama acted alone after Congress failed to pass comprehensive immigration reform. Donald Trump was among those who criticized Obama for sidestepping Congress, going so far as to call it an impeachable offense.

Senator Paul argued at the time that President Obama could not act like a king and ignore the Constitution. In his recent op-ed, the senator argues that President Trump’s decision to go around Congress, in order to obtain additional funds for a border wall, is comparable. He wrote in part:

“I would literally lose my political soul if I decided to treat President Trump different than President Obama. (Although, I’ll note, not one Democrat criticized Obama for his executive orders.)

I support President Trump. I supported his fight to get funding for the wall from Republicans and Democrats alike, and I share his view that we need more and better border security.

However, I cannot support the use of emergency powers to get more funding, so I will be voting to disapprove of his declaration when it comes before the Senate.

Every single Republican I know decried President Obama’s use of executive power to legislate. We were right then. But the only way to be an honest officeholder is to stand up for the same principles no matter who is in power…

Congress clearly expressed its will not to spend more than $1.3 billion and to restrict how much of that money could go to barriers. Therefore, President Trump’s emergency order is clearly in opposition to the will of Congress.

Moreover, the broad principle of separation of powers in the Constitution delegates the power of the purse to Congress. This turns that principle on its head.”

This isn’t about support or opposition for the wall. The question before us is this: Do we want the Executive Branch—now or in the future—to hold a power that the Founders deliberately entrusted to Congress? 2/3

In late February, Senator Susan Collins cited the founders as she laid out her reasoning for disapproving of the national emergency declared by President Trump. She argued that Alexander Hamilton and James Madison had explained in the Federalist Papers that the legislative branch needed to have the power to control how the federal government allocated funds. In a speech on the Senate floor, Senator Collins said, “The question before us is not whether to support or oppose the wall. It is not whether to support or oppose President Trump. Rather, it is this: do we want the executive branch, now or in the future, to hold the power that the founders deliberately entrusted to Congress?” 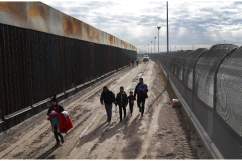 What is a Bollard-Style Border Wall or Fence?

3. Lawmakers Expressed Concern About Funds Being Taken Away From Military Projects That Had Been Deemed Essential

Spoke with @VPOTUS today on the national emergency declaration – I am seeking assurances that the money will not come from Arizona military construction projects. We can & must secure our border while ensuring our armed forces have the resources and facilities they need.

Senate Republicans such as Lamar Alexander of Tennessee and Martha McSally from Arizona both expressed concern about funding being taken away from military construction projects. Neither of them confirmed ahead of time how they planned to vote on the president’s national emergency. Other Senate Republicans whose decisions appeared uncertain ahead of the vote included Mitt Romney of Utah, Rob Portman of Ohio, Marco Rubio of Florida, and Roy Blunt of Missouri. Even Senator James Inhofe of Oklahoma, a frequent defender of the president, had indicated he could vote against the national emergency if it jeopardized military funding.

The Trump administration had laid out plans to use up to $3.6 billion from the Department of Defense. Projects that could be delayed if the money is diverted include improvements to F-35 aircraft hangars, maintenance upgrades at bases overseas and building new family units for service members.

The Military Times also reported that the Pentagon was looking into using funds from pension accounts and military pay to help fund the border wall. Democrat Dick Durbin of Illinois told the website that up to $1 billion funds may be available because fewer service members are taking early retirement and total recruitment has reportedly declined.

4. Trump Warned That GOP Senators Who Voted Against the National Emergency Would Put Themselves at ‘Great Jeopardy’

Senate Republicans are not voting on constitutionality or precedent, they are voting on desperately needed Border Security & the Wall. Our Country is being invaded with Drugs, Human Traffickers, & Criminals of all shapes and sizes. That’s what this vote is all about. STAY UNITED!

President Trump repeatedly urged Senate Republicans to support his decision to declare a national emergency on the southern border, even as more GOP senators indicated they would vote against it. The Democrats needed just four Republicans to vote with them to pass the resolution against the national emergency and Majority Leader Mitch McConnell acknowledged the votes were there. The New York Times reported that Senator McConnell even looked into whether the measure could be amended and sent back to the House, which would have delayed a Senate vote.

President Trump used social media and TV interviews to make his case to Senate Republicans. He tweeted on March 6, “Senate Republicans are not voting on constitutionality or precedent, they are voting on desperately needed Border Security & the Wall. Our Country is being invaded with Drugs, Human Traffickers, & Criminals of all shapes and sizes. That’s what this vote is all about. STAY UNITED!”

On February 28, the president issued a veiled threat to senators who voted against him, specifically those up for re-election in 2020. President Trump told Sean Hannity in an interview that aired February 28, “I think that really it’s a very dangerous thing for people to be voting against border security. I really think that Republicans that vote against border security and the wall, I think you know, I’ve been okay at predicting things, I think they put themselves at great jeopardy.”

5. President Trump May Have Hurt His Own Case When He Said ‘I Don’t Have to Do This’ When Declaring the National Emergency

"I could do the wall over a longer period of time," Pres. Trump says.

President Trump announced on February 15, 2019, that he was signing a bipartisan spending deal and declaring a national emergency at the same time.

The congressional deal provided $1.375 billion for bollard-style fencing at the border. It provided an overall $1.7 billion increase in spending for the Department of Homeland Security, which would pay for more customs officers, humanitarian aid and technology. The bill also funds approximately 45,000 beds at immigration detention centers operated by ICE.

In making the announcement, President Trump provided opponents with ammunition against the national emergency. He stated during the Rose Garden speech, “I could do the wall over a longer period of time. I didn’t need to do this. But I’d rather do it much faster.” You can see that portion of the speech embedded above.

READ NEXT: Can President Trump Pardon Manafort on State Charges?