Matthew Albence, the current acting Deputy Director of U.S. Immigration and Customs Enforcement who has previously compared immigration detention centers to “summer camp,” has been tapped to lead the department as the Acting Director.

Vitiello has since resigned. He told staffers in an outgoing email that Albence would be taking over.

1. Matthew Albence Has Defended the Detention Centers Where Immigrant Families are Kept as Having a ‘Summer Camp’ Atmosphere But Refused to Answer If He’d Be Comfortable Having His Own Children in Such a Facility

.@senkamalaharris: "Do you have children, or do you know children that have attended summer camp? Would you send your children to one of these detention centers?@ICEgov Executive Associate Director Matthew Albence: "That question's not applicable, what I can tell you is…" pic.twitter.com/0Q9g07mQOz

Matthew Albence appeared before the Senate Judiciary Committee to address border security and immigration on July 31, 2018. This was a few weeks after President Trump signed an executive order ending the controversial policy of separating migrant children from their parents at the border.

Albence claimed that the facilities where families were kept were more like “summer camps” than detention centers. He explained to lawmakers in the hearing broadcast on CSPAN, “These individuals have access to 24/7 food and water. They have educational opportunities. They have recreational opportunities, both structured as well as unstructured. There are basketball courts, there are exercise classes, there are soccer fields that we put in there. They have extensive medical, dental and mental health opportunities. In fact, many of these individuals, the first time they’ve ever seen a dentist is when they’ve come to one of our FRC’s (family residential centers). When they leave an FRC, they leave there with seven sets of clothing for each individual that was in that FRC. While they are there, they do have all sorts of access to pro bono legal opportunities. There’s the legal orientation program that is there… I’m very comfortable with the level of service and protection that is being provided in the FRC’s.”

Critics slammed Albence’s comparison. The deputy director of the American Civil Liberties Union’s Immigrants’ Rights Project, Lee Gelernt, told CNN, “It doesn’t matter what the facilities look like. The trauma is from separating the child from the parent. Every night the child is going to sleep thinking, ‘Am I ever going to see my parents again?’ It doesn’t matter whether they are in palaces. They certainly are not palaces. That’s a shocking statement.”

In a follow-up hearing before the Senate Homeland Security and Governmental Affairs Committee in September of 2018, Albence doubled down on his assertion that the detention facilities were comparable to summer camp. He told the committee, “I believe the standards under which they are kept are very safe. They’re humane.”

Senator Kamala Harris asked Albence if he would be comfortable having his own children there. Albence did not say yes or no. Instead, he responded, “That question’s not applicable.” Albence added that he had recently visited a detention center and noted that the children were receiving medical care, were able to play in the recreational areas and that adults had access to computers. He said the dorm-style living areas had “televisions, Xboxes and a host of other recreational opportunities.”

2. Albence Has Called on Lawmakers to Terminate the Flores Settlement Agreement, Which Mandates That Children Cannot Be Detained Longer Than 20 Days

Matthew Albence appeared before the Senate Homeland Security and Governmental Affairs Committee on September 18, 2018. That was the same appearance referenced above, in which he doubled down on his assertion that the detention centers for families were like summer camps.

In his opening statement before the committee, Albence laid out an argument criticizing the Flores Settlement Agreement. The agreement was settled in 1997 in connection to a 1987 court case called Flores v. Reno in California. As explained by the National Conference of State Legislatures, the case mandated that children cannot be detained longer than 20 days. It also set specific standards for housing.

The Immigration and Naturalization Service, which is part of Homeland Security, is required to “place minors in the least restrictive setting appropriate to the child’s age and special needs, provide notice of rights, safe and sanitary facilities, toilets and sinks, drinking water and food, medical assistance, temperature control, supervision, and contact with family members, among other requirements… The program must also provide physical care, food, clothing, grooming items, routine medical and dental care, immunizations, medication, an individualized needs assessment for each child, an educational assessment and plan, a statement of religious preferences, an assessment identifying immediate family members in the United States, education services and communication skills, English language training, recreation and leisure time, and access to social work staff and counseling sessions.”

Albence argued before Congress that the Flores settlement “as interpreted by court decisions, makes it operationally unfeasible for DHS and ICE to simultaneously enforce our immigration laws and maintain family unity.” He explained that a substantial number of unaccompanied children and family units fail to show up in court. “Unfortunately, by requiring the release of family units before the conclusion of immigration proceedings, seemingly well-intentioned court rulings, like those related to the FSA, and legislation like the TVPRA in its current form create legal loopholes that are exploited by transnational criminal organizations and human smugglers. These same loopholes encourage parents to send their children on the dangerous journey north, and further incentivizes illegal immigration.”

Albence’s proposed solutions included terminating the Flores Settlement Agreement and instating new rules for how to handle minors in detention. He also called for an amendment to the “credible fear standard” which is applied when immigrants are seeking asylum. Albence argued that the current system “has proved to be ineffective in screening out those with fraudulent or frivolous claims, and it thus creates a pull factor and places a strain on the system that inhibits the government’s ability to timely address meritorious asylum claims while allowing those
without valid claims to remain in the United States.” You can read Albence’s full statement here.

3. Albence Has Been With ICE Since 2012 & Was in Charge of the Department Responsible for Identifying & Arresting Illegal Immigrants Suspected of Posing a National Security Risk

Matthew Albence has been working with U.S. Immigration and Customs Enforcement since 2012. He began as an Assistant Director for the Enforcement and Removal Operations department. The department’s mission is laid out on the government website as such:

“To identify, arrest, and remove aliens who present a danger to national security or are a risk to public safety, as well as those who enter the United States illegally or otherwise undermine the integrity of our immigration laws and our border control efforts. Enforcement and Removal Operations (ERO) upholds America’s immigration laws at, within and beyond our borders through efficient enforcement and removal operations.”

Albence was promoted to Executive Associate Director in February of 2017. He has also served as the Acting Deputy Director of ICE. He will need to be formally appointed to the deputy director position before he can officially take over as the Acting Director of the entire agency, a senior administration official explained to CNN.

4. Albence Ordered ICE Agents to Take Action Against All Undocumented Immigrants They Encountered, Even If They Had Not Committed a Crime

Matthew Albence has taken harsher stances against undocumented immigrants than previous administrations have touted. In February of 2017, Albence sent a memo to ICE agents that went further than the Trump administration had vowed to go.

At the time, John Kelly was the Homeland Security Secretary and Albence reported to him. He and other members of the Trump administration had pushed for agents to focus on apprehending illegal immigrants that had committed crimes or posed a security risk.

But Albence instructed agents to detain any undocumented immigrants they came across, regardless of criminal history. The very top of the memo reads, “Effective immediately, ERO officers will take enforcement action against all removable aliens encountered in the course of their duties.” You can read the memo in its entirety embedded above.

5. Matthew Albence Has Worked in Law Enforcement For More Than Two Decades

Matthew Albence has spent his entire career in law enforcement. According to his bio on the ICE website, Albence began his career as a Special Agent with the U.S. Immigration & Naturalization Service in 1994. He became a Supervisory Agent in 1999 and was based out of San Antonio, Texas. 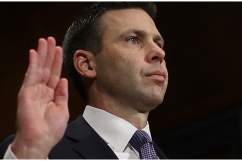