Pete Buttigieg, the youngest Democratic candidate in the race for the 2020 nomination, is one of the few candidates in the field still working to pay off student loan debt.

Buttigieg earned a salary of nearly $150,000 from his job as the mayor of South Bend, Indiana. His second term ended at the beginning of January 2020.

He received a $75,000 advance on his autobiography “Shortest Way Home” and has investments in tech companies. But the financial disclosure form that he submitted to the Federal Election Commission in May of 2019, also shows that he and husband Chasten Glezman Buttigieg owe between $140,004 and $365,000 on student loans. Candidates are not required to submit the estimated value of their primary residence on the financial disclosure form.

Buttigieg has a personal net worth of approximately $100,000, according to an estimate by Forbes.

The majority of Pete Buttigieg’s income over the past few years stemmed from his mayoral salary. His financial disclosure form submitted to the Federal Election Commission listed his 2018 salary as $149,725.

The Pete for America campaign shared 10 years worth of tax returns to the organization’s website; you can see all of them here. He married Chasten Glezman in July of 2018 and they filed a joint tax return. Their combined gross income was listed as $152,643. They paid about $20,000 in taxes and received a $1,000 refund. You can see the full tax return here.

Buttigieg’s individual tax returns since 2012 show that he has steadily increased his income since first taking office in South Bend in January of 2012. The year 2014 was the exception to this. He took a 7-month unpaid leave of absence to deploy to Afghanistan as part of the Navy Reserve. In 2011, while running for the mayoral office, Buttigieg said he relied on savings. The tax returns from 2007 through 2010 reflected time spent working at the consulting firm McKinsey & Company.

The only year that Buttigieg did not receive a federal refund was 2017. He owed $7,162 that year.

The financial disclosure form submitted to the FEC includes a notation that Chasten resigned from his teaching job at Montessori Academy on January 5, 2019. He still works part-time at the South Bend Civic Theater and earns an hourly wage.

Pete Buttigieg financial disclosure form filed in May of 2019

Pete Buttigieg and husband Chasten Glezman Buttigieg will be paying their student loan debt for the next several years. Mayor Pete’s financial disclosure form, which you can see in full here, includes a list of the specific loans and interest rates they both owe. The interest rates range from 3.4 percent to 6.8 percent.

On this form, candidates are only required to submit a range, as opposed to the exact total. Pete and Chasten Buttigieg owe between $140,000 and $365,000. They have up to 25 years to finish paying down the loans.

Mayor Pete attended Harvard Univesity and Oxford. Chasten Glezman earned a bachelor’s degree from the University of Wisconsin and a master’s in teaching from DePaul University.

3. Pete Buttigieg Received a $75,000 Advance For His Autobiography & Receives Royalties Based on Sales

Pete Buttigieg wrote an autobiography, “Shortest Way Home,” which was published by the Liveright Publishing Corporation on February 12, 2019. It went on to become a New York Times bestseller.

The company awarded Buttigieg a $75,000 advance for the book. He also received $3,000 to narrate the book for the audio version.

GettyDemocratic presidential candidate and South Bend, Indiana Mayor Pete Buttigieg speaks to an overflow crowd during a luncheon hosted by the City Club of Chicago on May 16, 2019.

Pete Buttigieg and his husband have a limited number of assets listed on the financial disclosure form submitted to the FEC. Underneath his mayoral salary, it shows that Buttigieg has “passive u.s. equities” valued between $50,000 and $100,000. He also has investments in bonds and funds, each of which is valued between $1,000 and $15,000. Buttigieg also earned income between $2,500 and $5,000 from an investment in the USAA Precious Metals and Minerals Fund.

Buttigieg and his husband are also players in the stock market and their selected industry is tech. They have invested between $15,000 and $50,000 in Apple and received dividends of less than $1,000 in 2018. Their investment in Alphabet Inc, the parent company of Google, fared better. Buttigieg has between $1,000 and $15,000 invested in Alphabet and received an amount between $2,500 and $5,000 in Capital Gains.

5. Pete Buttigieg Owns an Older Home in South Bend That He Purchased in 2009

Pete Buttigieg lives around the block from his mother, Jennifer Anne Montgomery. His father, Joseph Buttigieg, passed away in January of 2019.

Buttigieg purchased the house that he now shares with husband Chasten and their two dogs, Truman and Buddy, in 2009. We are not sharing the address here for privacy reasons. But according to Zillow, Buttigieg bought the house for about $125,000. In an interview with CBS News’ John Dickerson, Buttigieg shared that the house was constructed in 1905 and was vacant when he purchased it. He said that he watched the price drop over several months. Once it reached a number he was financially comfortable with at the time, Buttigieg bought it. 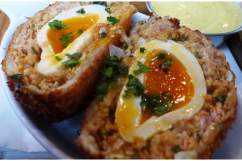