Anne McClain is one of NASA’s most respected female astronauts and has been accused of hacking into her estranged wife’s bank account while serving aboard the International Space Station (ISS). The New York Times is reporting this may be the first case of space crime.

McClain is in the midst of an ugly divorce and child custody dispute with Summer Worden. Worden said she couldn’t understand how McClain could know so many details about her finances while serving a six-month stint orbiting the earth on the ISS from December 2018 to June 2019. Worden did some research and discovered someone had signed in to her bank account using her password on a computer registered to NASA.

Worden notified the Federal Trade Commission and filed a complaint with NASA alleging that McClain committed identity theft. McClain asserts she did nothing wrong, that Worden had previously granted her permission to view the account, and that she wasn’t aware Worden had rescinded her consent. According to McClain, she was merely checking to make sure all of the couple’s finances were in order as she had always done throughout their marriage.

McClain reiterated her innocence, saying in a tweet “there’s unequivocally no truth to these claims,” and that she has “total confidence in the [NASA Inspector General] process.

Here’s what you need to know about astronaut Anne McClain and her dispute with her ex-wife:

Are playing rugby and training to spacewalk alike? For me, there are a lot of similarities. Grit, toughness, mental focus, and more. Here are my thoughts… pic.twitter.com/O9CO18oxTv

According to her NASA biography, Lieutenant Colonel McClain is a Senior Army Aviator, with more than 2,000 flight hours in 20 different aircraft. She is a rated pilot for the C-12 Huron (King Air), UH-60 Blackhawk, and UH-72 Lakota and instructor pilot for the OH-58D Kiowa Warrior. 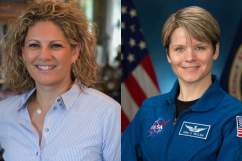 P08242019 #Nasa was investigating a claim that an #astronaut accessed the bank account of her partner from the #ISS, the first allegation of a crime in space. Anne McClain denied any wrongdoing. Her partner, Summer Worden filed a complaint with the Federal Trade Commission #FTC pic.twitter.com/QHij2puwS2

Mcclain is separated from spouse Summer Worden, a 13-year veteran of the US Air Force who handled intelligence operations, financial intelligence, and analysis. Worden also worked for the National Security Agency as an intelligence officer.

Now living in Kansas, Worden is the founder of Lady Bird Capital, a company that specializes in commercial real estate investment. She also founded Filly Intelligence LLC, a technology and security services firm that specialized in “cyber-security and threat intelligence, risk assessment and risk mitigation, security solutions and digital forensics, and technology.

Worden attended the NSA Cryptologic School and has graduate degrees in strategic intelligence and digital forensics, and an M.B.A. from Rice University.

3. McClain & Worden’s Arguments Are Fueled by a Custody Dispute

A single mother before meeting McClain, Worden’s son was conceived via in vitro fertilization and carried by a surrogate. “He is mine biologically, I had him all by myself,” Worden told KPRC2.

Worden and McClain began their relationship when the boy was a year old and the two married eight months later in 2014. Once married, McClain wanted to adopt the boy but Worden refused.

After three years together, the marriage deteriorated. At one point, McClain accused Worden of assault, but the case was dismissed. The accusation resulted in Worden filing for divorce. The couple has since gone through a bitter separation, fueled mostly by custody issues involving the little boy.

In 2018 McClain asked a judge for joint custody of the child, telling the court she was “there for his first steps and first words,” and that they had “a very healthy and deep parental relationship.” The couple’s divorce is set to be finalized in October 2019 but a court date for determining custody has not been scheduled.

Unconfirmed reports citing Astronaut Anne McClain saying the divorce was because “I’m just so above her” are unconfirmed.

Tune in next week for the next installment of SPACE SPAT! https://t.co/RiPRuQ2wzT

Out of 6,000 applicants, McClain was selected by NASA as one of eight members of the 21st NASA astronaut class in June 2013.

L-7: One week from landing & preparations are in full swing. Today we leak checked our suits – first time we've been in the Sokol since arriving to @Space_Station on December 3rd. Like descending a mountain after a summit, landing is a critical & dynamic phase of the expedition. pic.twitter.com/u9HayeZxzc

From December 3, 2018, to June 24, 2019, McClain served as Flight Engineer on the ISS for Expedition 58 and 59. During her stay on the ISS, McClain performed many biology, biotechnology, and physical science experiments. She also carried out two spacewalks totaling 13 hours and 8 minutes.

Some more shots of the #spacewalk on Friday – was privileged to work with my friend and colleague @NASA_Astronauts @AstroHague pic.twitter.com/KueUo7HXFm

While on the ISS she was joined by Russian Cosmonaut Oleg Kononenko and Canadian Space Agency astronaut David St. Jacques. Their mission launched from Baikonur Cosmodrome, a space site in southern Kazakhstan leased to Russia.

5. Anne McClain Was Supposed to Perform the First All-Female Spacewalk

"That was my recommendation."

Astronaut Anne McClain tells @ABC News about the decision behind NASA's announcement canceling first-ever all-female spacewalk because of a lack of medium-size spacesuits on the International Space Station. https://t.co/NusxJNOYlx pic.twitter.com/JoYVquH5kR

In March 2019, astronaut Anne McClain was ready to make history with astronaut Christina Koch by performing the first all-female spacewalk. The two were supposed to repair batteries on the ISS. It was during the preparation for this walk that McClain allegedly accessed Worden’s bank records.

The planned walk hit a snag when NASA realized both women needed a medium-sized Hard Upper Torso (HUT) spacesuit to complete the mission but only one was aboard the space station that was ready for use. Another medium HUT was available but would have required 12 hours of modifications to properly fit McClain.

The spacewalk cancellation resulted in NASA facing accusations of sexism and receiving harsh criticism for not having enough space suits available for women. “NASA’s spacesuit inventory is woefully old and woefully paltry,” astronaut Kathryn Sullivan told ABC News, noting that the lack of spacesuits had more to do with NASA’s lack of funding than sexism.

Loading more stories
wpDiscuz
0
0
Would love your thoughts, please comment.x
()
x
| Reply
Anne McClain, one of NASA’s most respected female astronauts, is accused of hacking into her estranged wife’s bank account while serving aboard the International Space Station. It may be the first case of space crime.