David Holmes is the Counselor for Political Affairs at the U.S. Embassy in Ukraine, and a top aide to William Taylor, the top U.S. diplomat in Ukraine.

Holmes is speaking before the House Intelligence Committee today, primarily in respect to an alleged call he listened to between Donald Trump and United States ambassador to the European Union, Gordon D. Sondland.

1. Holmes Is the Counselor for Political Affairs at the U.S. Embassy in Ukraine 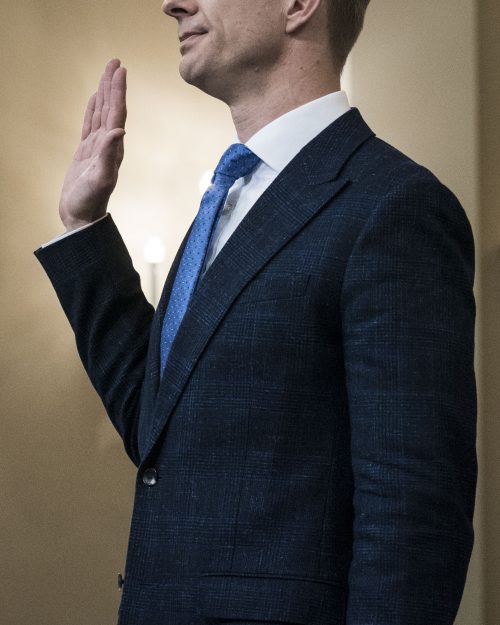 WASHINGTON, DC – NOVEMBER 21: David Holmes, an official from the American embassy in Ukraine, is sworn in before testifying to the House Intelligence Committee in the Longworth House Office Building on Capitol Hill November 21, 2019 in Washington, DC. (Photo by Sarah Silbiger/Getty Images)

Holmes’ testimony today will mark the second time he’s spoken to the committee during the impeachment inquiry; he first spoke to them in a closed-door meeting last week.

During the private closed-door testimony, Holmes said he had never seen “anything like” the phone call he overheard between Trump and Zelensky. He added, “There’s just so much about the call that was so remarkable that I remember it vividly.”

You can read his full opening statement that he gave during his closed door testimony here.

During Taylor’s testimony on Wednesday, he said he’d learned from a staffer who had allegedly overheard a call between Trump and Sondland, in which Sondland told Trump that the Ukrainians were “ready to move forward.”

Taylor said that his staffer explained how he had asked Sondland, after the phone call was over, how much Trump cared about Ukraine. The staffer said Sondland replied that Trump cared more about the Bidens.

Soon, several “sources” confirmed Holmes to be the unnamed staffer to networks like NBC News.

You can watch some of Taylor’s testimony above.

3. Holmes Is ‘Very Sharp, Honest, & Experienced,’ as Well as ‘Outspoken’

William Burns, a career diplomat & former deputy secretary of state, described David Holmes as "a very sharp, honest, experienced" foreign service officer, telling CBS News he was "one of the best I ever served with."
w @becket @ArdenFarhi @margbrennan: https://t.co/GofN1X6agl

William Burns, a former deputy secretary of state, talked about his time working with Holmes to CBS News. Holmes served as Burns’ staffer assistant on South and Central Asia from 2010-11, the network reports. Burns said Holmes is “one of the best I ever served with,” and further described him as “very sharp, honest, and experienced.”

Holmes left Burns’ service when he was assigned to another detail on the National Security Council as a director for Afghanistan.

According to The New York Times, Holmes has also developed a reputation for being “outspoken,” and even received an award for “constructive dissent” after raising concerns over Barack Obama’s policies in South Asia.

4. Holmes’ Wife, Stephanie, Works as the Head of Law Enforcement for the U.S. Embassy in Ukraine

Holmes’ wife is Stephanie Holmes. Stephanie works as the Head of Law Enforcement for the U.S. Embassy in Ukraine. When Holmes received his award for “constructive dissent” in 2014, Stephanie was there to support him.

Holmes and Stephanie have two children together. You can learn more about Stephanie here.

5. Holmes Is Originally From California, & Has Degrees From Pomona College, St. Andrews in Scotland, & Princeton University

Holmes originates from California, and attended Pomona College as an undergraduate. He has also received degrees from Princeton University and the University of St. Andrews in Scotland.

Holmes joined the State Department during the administration of George W. Bush, per The New York Times.

In all, Holmes has served stints in over a dozen countries, including, Russia, Afghanistan, India, Colombia, Kosovo, Kabul, and Delhi. He’s also served on the National Security Council in Washington, per The Times.

READ NEXT: Daniel Noble: 5 Fast Facts You Need to Know