Diana Taylor is the longtime girlfriend of former New York City Mayor Mike Bloomberg, who announced on Sunday that he is running for president in 2020. Taylor and Bloomberg began dating in 2000 after he divorced his wife Susan Brown.

Taylor was considered the unofficial First Lady of New York City during Bloomberg’s three terms as mayor although the two have never married. She has a long career in banking and finance, serving as New York State’s superintendent of banks from 2003 to 2007.

I believe my unique set of experiences in business, government, and philanthropy will enable me to win and lead.

Here’s what you need to know about Diana Taylor.

1. Diana Taylor Considered Running for New York Senate Against Sen. Kirsten Gillibrand in 2010 But Ultimately Decided Not To

Diana Taylor was floated as a possible Republican challenger against New York Sen. Kirsten Gillibrand in 2010. Taylor, a private figure in New York City who rarely gives interviews, told the New York Daily News that it would have been difficult to run for the Senate seat while her boyfriend Mike Bloomberg was serving his third term as New York City mayor.

She eventually quashed rumors that she would run against Gillibrand. “I am flattered about the speculation over a possible race for the U.S. Senate, and have enjoyed my years of public service, but I have no intention of running for the U.S. Senate,” Taylor told the New York Post.

But she then refueled speculation over her political ambitions, telling NBC Channel 4 in New York that she believed she could have beaten Gillibrand.

Taylor “self-identifies as a Republican, but is socially liberal herself, though fiscally conservative—a libertarian lite, perhaps,” the New York Observer reported, quoting her as saying, “I’m socially very liberal. I don’t understand why anybody cares who marries who. I think that guns should not be in the hands of criminals, and I’m rabidly-pro-choice. It’s nobody else’s business, and I’m fiscally quite conservative.”

2. Diana Taylor Served as New York State Superintendent of Banks Under Gov. George Pataki and Was Considered for Chair and CEO of the FDIC

Like her longtime boyfriend Mike Bloomberg, who made his billions in the financial industry, Diana Taylor has had an impressive career in finance and banking.

The pair met during a Citizens Budget Committee meeting in New York City in 2000 when Taylor was vice president of KeySpan Energy. Bloomberg went on to become mayor after the Sept. 11, 2001 terrorist attacks and Taylor became chief financial officer for the Long Island Power Authority in 2001, according to a professional bio.

From 2003 to 2007, Taylor served as New York State Superintendent of Banks. President George W. Bush considered her to head up the Federal Deposit Insurance Corporation, or FDIC, according to the New York Daily News, but her name was eventually withdrawn from consideration.

Most recently she was vice chair at Solera Capital. She also serves in different capacities for numerous charities and non-profit organizations, including AMFAR, the Mayo Clinic, the International Women’s Health Coalition and the Council on Foreign Relations.

3. Diana Taylor Met Mike Bloomberg in 2000 During a Meeting for the New York City Citizens Budget Committee When the Two Were Seated Next To Each Other

Diana Taylor, 64, was divorced with no children and working as vice president of KeySpan Energy when she met Mike Bloomberg at a meeting for the Citizens Budget Committee in New York City. The two were seated next to each other during the meeting and have been dating ever since.

Taylor lives with Bloomberg at his townhouse on the Upper East Side of Manhattan. She gets along with Bloomberg’s two adult children, Georgina and Emma, and his ex-wife Susan Brown. 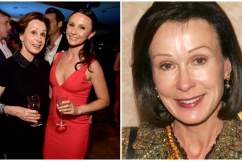 In a 2007 interview with the New York Daily News, she was described as “a fiercely loyal companion who has lived with Bloomberg’s ups and downs as the 108th mayor of the city.”

And Bloomberg, who is usually described as stoic and data-driven, said of Taylor: “What can I say? She’s got beauty, she’s got brains, she’s got personality. She’s sophisticated but down to earth. She’s one of those people who can do anything she sets her mind to.”

4. Diana Taylor Has Been On Vanity Fair’s International Best Dressed List Twice and Says Audrey Hepburn Is Her Style Icon

Michael Bloomberg and Diana Taylor attend the Heavenly Bodies: Fashion & The Catholic Imagination Costume Institute Gala at The Metropolitan Museum of Art on May 7, 2018 in New York City. Photo by Jason Kempin/Getty Images

New York City mayor Michael Bloomberg, the founder of Bloomberg LP, can usually be spotted wearing navy suits and monogrammed shirts with colorful ties. His partner, Diana Taylor, whose style icon is Audrey Hepburn, identifies her look as “New York City.” Look for Taylor accessorizing with a gold bracelet given to her by her grandmother (it’s engraved with their names) and running around town in flat walking shoes—they do not look like sneakers.

While she rarely gives interviews and keeps a low profile, Taylor has been photographed with her longtime boyfriend former New York City Mayor Mike Bloomberg at numerous black-tie events and galas.

In 2011, she did a glamorous photo shoot with Harper’s Bazaar magazine.

Michael Bloomberg, Diana Taylor and Georgina Bloomberg arrive for the 2019 Met Gala at the Metropolitan Museum of Art on May 6, 2019, in New York. ANGELA WEISS/AFP via Getty Images

In 2001, shortly after Mike Bloomberg was elected mayor of New York City, Newsday ran a story about how he claimed he was 5’10” on his drivers license.

Bloomberg’s actual height has been a source of speculation for years. From The New York Times in 2006:

A search of news reports does not provide much clarification. The Newsday report in 2001 described Mr. Bloomberg as slightly shorter than a 5-foot-8 press aide, Jerry Russo. A Daily News article in 2003 put the mayor’s height at 5-foot-6. And a New York Sun article during the mayoral race last year put it at 5-foot-7.

In a 2007 article in New York Magazine, when Bloomberg was again considering a run for the Oval Office, he seemed to clear up the mystery saying, “What chance does a five-foot-seven billionaire Jew who’s divorced really have of becoming president?”

According to media reports, Diana Taylor hovers around 6 feet. Harper’s Bazaar described her a “model-tall.”

Loading more stories
wpDiscuz
0
0
Would love your thoughts, please comment.x
()
x
| Reply
Diana Taylor is the longtime girlfriend of former New York City Mayor Mike Bloomberg, who is considering a run for president in 2020. She and Bloomberg began dating in 2000 after he divorced his wife Susan Brown. Taylor was considered the First Lady of New York City during Bloomberg's three terms as mayor, although the two have never married. She has a long career in banking and finance, serving as New York State's superintendent of banks from 2003 to 2007.