Tony Sayegh is the former assistant secretary for public affairs for the Treasury Department who has been tapped by President Donald Trump to help coordinate the White House message on the impeachment inquiry investigation.

Born in Brooklyn and of Lebanese descent, Sayegh left his post at the Treasury Department in May. He was working as an assistant director for Teneo, a New York City-based global CEO consulting company, before returning to government.

1. Tony Sayegh Was Assistant Secretary for Public Affairs at the Treasury Department from March 2017 to May 2019 and Is a Former Fox News Contributor

Tony Sayegh worked in the press office for Jack Kemp, who was Sen. Bob Dole’s running mate during his run for president in 1996. According to his Linkedin bio, he became deputy mayor of Tuckahoe in New York from 2003 to 2007. In 2013, he became a contributor for Fox News until 2017 when he joined the Treasury Department.

He then joined Teneo, a global CEO consulting firm based in New York City. He attended George Washington University in Washington, D.C. where he earned a bachelor’s degree in political science and public administration and a master’s in business administration.

Bondi is a longtime Trump supporter, giving a primetime address during the Republican National Convention in 2016.

“Expect to see Pam on TV a lot,” an administration official familiar with the arrangement told the Washington Examiner. “Tony will be managing a lot of the strategy.” 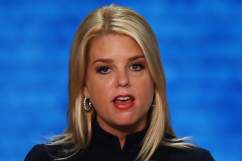 3. Tony Sayegh Was Born in Brooklyn, Lives in Eastchester and Was Deputy Mayor of Tuckahoe, New York

Tony Sayegh first entered public office at the age of 27 as the deputy mayor and trustee of the village of Tuckahoe, New York, located just north of The Bronx in New York City. According to an official bio released by the White House when he was appointed to the Treasury Department in 2017, Sayegh “is a Republican strategist, political analyst, and a Fox News Contributor.”

Sayegh also ran for Eastchester Town Board and New York State Assembly, but lost both races, according to the Daily Voice in Tuckahoe.

First Lady Hillary and President Bill Clinton are seen at the first dance of their second Inaugural Ball in 1997. This elegant gown was fashioned by Oscar de la Renta. (Getty)

After leaving his post as deputy secretary for public affairs for the Treasury Department, Tony Sayegh was working as associate director for Teneo, a global CEO consulting firm based in New York City and founder by two former aides to Hillary Clinton.

According to Teneo, the company works “exclusively with the CEOs and senior executives of the world’s leading companies, Teneo provides strategic counsel across their full range of key objectives and issues. Our clients include a significant number of the Fortune 100 and FTSE 100, as well as other global corporations.”

Its chairman, CEO and co-founder is Declan Kelly, was U.S. Economic Envoy to Northern Ireland under then-Secretary of State Hillary Clinton.

Teneo’s president is Doug Band who began working in the Clinton Administration in 1995. According to his official bio with Teneo:

Doug served as President Clinton’s chief advisor from 2002 until 2011, advising him as the Counselor to the President, and was the key architect of Clinton’s post-Presidency. He created and built the Clinton Global Initiative, which has raised $69 billion for 2,100 philanthropic initiatives around the world and impacted over 430 million people in 180 countries.

….She is a very special person with extraordinary talents, who has done an incredible job! I hope she decides to run for Governor of Arkansas – she would be fantastic. Sarah, thank you for a job well done!

In June, the Trump Administration announced that White House Press Secretary Sarah Sanders would be leaving her post. Several names were floated to replace her, including Tony Sayegh.

Loading more stories
wpDiscuz
0
0
Would love your thoughts, please comment.x
()
x
| Reply
Tony Sayegh is the former assistant secretary for public affairs for the Treasury Department who has been tapped by President Donald Trump to help coordinate the White House message on the impeachment inquiry investigation.