Michael Horowitz is the inspector general for the Department of Justice. He released a report on Monday about the department’s handling of the investigation into Russian meddling in the 2016 presidential election.

Horowitz was charged with determining whether the Justice Department and the FBI did anything improper when investigating possible ties between Trump’s campaign and Russia.

“Our review identified significant concerns with how certain aspects of the investigation were conducted and supervised, particularly the FBI’s failure to adhere to its own standards of accuracy and completeness when filing applications for Foreign Intelligence Surveillance Act (FISA) authority to surveil Carter Page, a U.S. person who was connected to the Donald J. Trump for President Campaign,” the report concludes. “We also identified what we believe is an absence of sufficient policies to ensure appropriate Department oversight of significant investigative decisions that could affect constitutionally protected activity.”

The report said that “no political bias or improper motivation” influenced the decision to investigate.

The full 476-page report can be read here.

1. The Justice Department’s Inspector General Found No ‘Political Bias Or Improper Motivation’ By the Department or the FBI

Attorney General William Barr released a lengthy statement on Monday after the report was released.

“The Inspector General’s report now makes clear that the FBI launched an intrusive investigation of a U.S. presidential campaign on the thinnest of suspicions that, in my view, were insufficient to justify the steps taken. It is also clear that, from its inception, the evidence produced by the investigation was consistently exculpatory. Nevertheless, the investigation and surveillance was pushed forward for the duration of the campaign and deep into President Trump’s administration,” Barr said. “In the rush to obtain and maintain FISA surveillance of Trump campaign associates, FBI officials misled the FISA court, omitted critical exculpatory facts from their filings, and suppressed or ignored information negating the reliability of their principal source. The Inspector General found the explanations given for these actions unsatisfactory. While most of the misconduct identified by the Inspector General was committed in 2016 and 2017 by a small group of now-former FBI officials, the malfeasance and misfeasance detailed in the Inspector General’s report reflects a clear abuse of the FISA process.”

“FISA is an essential tool for the protection of the safety of the American people. The Department of Justice and the FBI are committed to taking whatever steps are necessary to rectify the abuses that occurred and to ensure the integrity of the FISA process going forward,” Barr said. “No one is more dismayed about the handling of these FISA applications than Director Wray. I have full confidence in Director Wray and his team at the FBI, as well as the thousands of dedicated line agents who work tirelessly to protect our country. I thank the Director for the comprehensive set of proposed reforms he is announcing today, and I look forward to working with him to implement these and any other appropriate measures.”

“With respect to DOJ personnel discussed in the report, the Department will follow all appropriate processes and procedures, including as to any potential disciplinary action,” he said.

2. Michael Horowitz Became Inspector General of the Justice Department in 2012 Under the Obama Administration

Michael Horowitz, 57, was sworn in as the inspector general of the Justice Department on April 16, 2012, after being confirmed by the Senate during the Obama Administration. According to his official Justice Department bio, Horowitz “oversees a nationwide workforce of more than 450 special agents, auditors, inspectors, attorneys, and support staff whose mission is to detect and deter waste, fraud, abuse, and misconduct in DOJ programs and personnel, and to promote economy and efficiency in Department operations.”

In 2015, he was named chairman of the Council of the Inspectors General on Integrity and Efficiency, which oversees all 73 federal inspectors general.

Before becoming the Justice Department’s inspector general, Horowitz was a partner at Cadwalader, Wickersham, & Taft LLP, where “he focused his practice on white collar defense, internal investigations, and regulatory compliance,” his bio says. He also was a board member of the Ethics Resource Center and the Society for Corporate Compliance and Ethics.

Horowitz began working for the Justice Department in 1991. He served as an Assistant U.S. Attorney for the Southern District of New York from 1991 to 1999, where he was the Chief of the Public Corruption Unit and a Deputy Chief of the Criminal Division. He worked in the DOJ Criminal Division in Washington from 1999 to 2002, first as a Deputy Assistant Attorney General and then as Chief of Staff.

Horowitz has served under both Democrat and Republican administrations. According to Reuters, Rob Storch, the National Security Agency inspector general, said “I couldn’t even tell you what his politics are. He is completely fair, right down the middle.”

Horowitz began his legal career as a law clerk for Judge John Davies of the U.S. District Court for the Central District of California and as an associate at Debevoise & Plimpton, a global law firm based in New York City.

3. Michael Horowitz Began His Investigation in 2016 Into Whether the Justice Department and the FBI Did Anything Improper When Investigating Russian Meddling in the 2016 Presidential Election

The DoJ inspector general has found that the FBI's Russia investigation was justified and untainted by political bias, debunking Trump's "deep state conspiracy" nonsense. He also found serious problems with the Carter Page FISA application, which should concern everyone.

Justice Department Inspector General Michael Horowitz began his investigation, dubbed Operation Crossfire Hurricane, in July 2016 “into whether individuals associated with the Donald J. Trump for President Campaign were coordinating, wittingly or unwittingly, with the Russian government’s efforts to interfere in the 2016 U.S. presidential election.”

“The question we considered was not whether a particular investigative decision was ideal or could have been handled more effectively, but rather whether the Department and the FBI complied with applicable legal requirements, policies, and procedures in taking the actions we reviewed or, alternatively, whether the circumstances surrounding the decision indicated that it was based on inaccurate or incomplete information, or considerations other than the merits of the investigation,” Horowitz said in the report’s executive summary.

“The president’s Republican allies allege that the FBI misused its surveillance authorities in targeting Carter Page, a former foreign policy adviser to the Trump campaign who had been on the bureau’s radar for years,” NPR reported. “Critics also argue that the FBI improperly relied on Steele’s dossier to get court approval for surveillance on Page.” 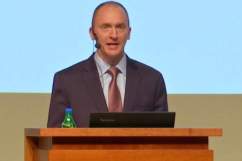 So it was all lies. No treason. No spying on the campaign. No tapping Trumps wires. It was just good people trying to protect America. https://t.co/9nurCaIBq2

“The Inspector General’s investigation is a credit to the Department of Justice. His excellent work has uncovered significant information that the American people will soon be able to read for themselves,” Justice Department spokeswoman Kerri Kupec said in a statement to reporters last week.

“Rather than speculating, people should read the report for themselves next week, watch the Inspector General’s testimony before the Senate Judiciary Committee, and draw their own conclusions about these important matters,” she said.

The full 476-page report can be read here.

In a speech in 2018 in New York City, Deputy Attorney General Rod Rosenstein said the department is not “flawless.”

“If you walk into any branch of the Department of Justice anywhere in the country, you will find some of the most decent, ethical, honorable and admirable people you could ever hope to meet. As Attorney General John Ashcroft used to say, our name represents a moral value, and we aspire to live up to it,” he told an audience at the Bloomberg Law Leadership Forum.

“That is not to say that everybody in our Department is flawless. No organization with 115,000 employees is error-free. But we are committed to correcting mistakes and punishing wrongdoers,” he said.

5. During His Senate Confirmation Hearing in 2012, Michael Horowitz Said He Would Quit As Inspector General If He Felt His ‘Independence Was Being Limited’

During his Senate confirmation hearing in 2012 to become the Justice Department inspector general, Michael Horowitz was asked by Sen. John Cornyn R-Texas, what he would do if he felt he was being pressured by political influences while doing his job.

“I want to ask you about your level of independence. I have great respect for the legal profession, and I heard what you said about your commitment to the law and to the facts. But can you explain to everyone listening, if
ultimately Attorney General Holder and the president himself can terminate you, how do you reconcile your independence with that fact?” Cornyn asked.

“I presumably would quit,” Horowitz said. “I’m obviously not committing to doing anything until a situation arose, but I’ve been in the Department in both administrations and have worked with people who made it clear that they would be willing to do that in an appropriate circumstance. So I don’t think it’s just an Inspector General, but I understand how it arises even in a
greater context with an Inspector General.”

Loading more stories
wpDiscuz
0
0
Would love your thoughts, please comment.x
()
x
| Reply
Michael Horowitz is the inspector general for the Department of Justice. He is releasing a report on Monday about the department's handling of the investigation into Russian meddling in the 2016 presidential election. Here's what you need to know.