TIME Magazine’s Person of the Year for 2019 was announced on December 11 and the winner is climate change activist Greta Thunberg.

The candidates came from the world of politics, entertainment, sports, business and groups that represent causes and people like climate change, Syrian Kurds and the Hong Kong protestors. Taylor Swift and Jennifer Lopez were on the list, along with Robert Mueller and Rudy Giuliani.

In 2018, TIME Magazine honored several journalists they dubbed “The Guardians,” for “taking great risks in pursuit of greater truths, for the imperfect but essential quest for facts that are central to civil discourse, for speaking up and for speaking out.” They included Jamal Khashoggi, Wa Lone and Kyaw Soe Oo, Maria Ressa and the Capital Gazette newspaper staff in Annapolis, Maryland. In 2017, the magazine honored those who spoke up in the #MeToo movement.

Here’s what you need to know about TIME Magazine’s 2019 Person of the Year.

GettySpeaker of the House Nancy Pelosi, Democrat of California, speaks to the press on September 24, 2019, in Washington, D.C.

Donald Trump, who was TIME Magazine Person of the Year in 2016 when he was elected president, was nominated for the third year in a row.

Time Magazine called to say that I was PROBABLY going to be named “Man (Person) of the Year,” like last year, but I would have to agree to an interview and a major photo shoot. I said probably is no good and took a pass. Thanks anyway! 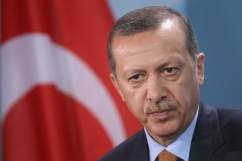 Ethiopian Prime Minister Abiy Ahmed Ali, who was awarded the Nobel Peace Prize, was also nominated for TIME Person of the Year.

2. Several Causes and Groups Were Nominated Including Climate Change Activists and the Hong Kong Protestors

Getty Riot police charge toward protesters during a demonstration in Wong Tai Sin district on October 1, 2019 in Hong Kong, China.

In 2017 TIME Magazine honored members of the #MeToo movement and a group of journalists in 2018. This year they nominated climate change activists who have mobilized around the globe, Syrian Kurds who have been “isolated after battling ISIS” in the Middle East, whistleblowers “documenting concerns like those that led to the impeachment inquiry” and pro-democracy protesters in Hong Kong.

Greta Thunberg, a 16-year-old climate change from Sweden, was also nominated and won the honor of TIME Magazine Person of the Year. 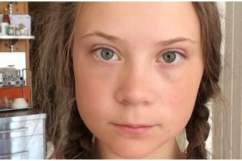 3. Keanu Reeves, Jennifer Lopez, Taylor Swift, Meghan Markle, Cardi B. and Game of Thrones Topped the List of Nominees in Celebrity and Entertainment

Keanu Reeves, who is best known for his roles in The Matrix, Bill and Ted’s Excellent Adventure and John Wick, has a Change.org petition with nearly 200,000 signatures. “Keanu is the most wholesome person alive, make him the person of the year! Keanu has secretly donated millions of his earnings to children’s hospitals and other charities, and has done amazing things for people in public while ask for nothing in return,” the petition says.

Taylor Swift was part of the group recognized in 2017 for their roles in the #MeToo movement.

Jennifer Lopez was named one of TIME Magazine’s Most Influential People in 2018. “She’s the first Latina actor to earn over $1 million for a film and the first woman to have a No. 1 album and a No. 1 movie in the same week. But she’s also a mother, an entrepreneur, an activist, a designer, a beauty icon, a philanthropist and a producer,” wrote actress Kerry Washington.

Meghan Markle, the Duchess of Sussex, was a runner up for the magazine’s honor in 2018. “Like all fairy tales, this story has a familiar arc: the prince, the romance, a ride in a horse-drawn carriage. A significant variation, though, is that our heroine is a self-made career woman and an avowed feminist. The question now seems less about what the royal family might do for Markle, than what she might do for them,” TIME wrote.

In September, TIME Magazine ran a cover story featuring e-cigarettes with the headline “The New American Addiction: How Juul Hooked Kids and Ignited a Public Health Crisis.” Adam Bowen and James Monsees founded Juul and made TIME Magazine’s 100 Most Influential People in 2018.

Mark Zuckerberg, founder of Facebook, made the TIME 100 this year. “Faced with tensions between the company’s idealistic belief in impartiality and “openness” and the realities of managing this global platform (public scrutiny, accusations of privacy abuses and government investigations), Mark will need to make hard choices. My hope is that he remains true to the ideals upon which the company was founded—choosing to promote universal values like decency over sensationalism, intimacy over social status, and human dignity over tribalism—or in Zuckspeak, simply: ‘goodness,'” Facebook co-founder Sean Parker wrote.

In 2018, TIME Magazine honored several journalists they dubbed “The Guardians,” for “taking great risks in pursuit of greater truths, for the imperfect but essential quest for facts that are central to civil discourse, for speaking up and for speaking out.” They included Jamal Khashoggi, Wa Lone and Kyaw Soe Oo, Maria Ressa and the Capital Gazette newspaper staff in Annapolis, Maryland. In 2017, the magazine honored those who spoke up in the #MeToo movement.