A 7.7-magnitude earthquake hit the coast of Cuba and Jamaica on Tuesday, according to the U.S. Geological Survey. A tsunami warning was issued in the Caribbean Sea. No deaths or injuries have been reported.

Several aftershocks were reported, including one that measured 6.1 magnitude.

“Based on all available data, there is no significant tsunami threat from this (6.1) earthquake. However, there is a very small possibility of tsunami waves along coasts located nearest the epicenter,” the National Weather Service’s Pacific Tsunami Warning Center said.

The Epicenter of the 7.7-Magnitude Earthquake Was South of Cuba and Northwest of Jamaica

The earthquake’s epicenter hit in the Caribbean Sea, south of Cuba and northwest of Jamaica.

According to the Associated Press, the powerful earthquake was centered 86 miles northwest of Montego Bay, Jamaica, and 87 miles west-southwest of Niquero, Cuba. It hit at 2:10 p.m. EST. 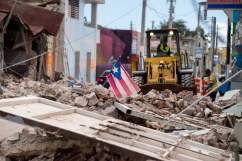 Puerto Rico Earthquakes: Here’s How You Can Help

The earthquake was felt as far away as Florida. Miami-Dade Police said they received “phone calls of buildings shaking, and chopper footage showed multiple buildings being evacuated,” according to NBC 6 in Miami.

There was just a 7.3 magnitude earth quake in Jamaica.

In my apt in Miami – this just happened.

Could feel the whole building swaying.

The earthquake was originally reported as a 7.3 magnitude, but was soon upgraded to a 7.7 magnitude.

Here's an updated map showing what is now being called a magnitude 7.7 #earthquake in the western Caribbean. pic.twitter.com/PZy7ReH897

The Earthquake Was Felt in Cuba, Jamaica and the Cayman Islands

People in Kingston, Jamaica, could be seen rushing outside of buildings as the quake struck. It’s unclear if there are any deaths or extensive damage.

New kingston after the #earthquake pic.twitter.com/vGnOiArvCl

Flights to and from Kingston and Montego airports in Jamaica were in a holding pattern immediately after the earthquake hit, according to the International Flight Network. Flights have since resumed.

The earthquake was felt in Santiago, Cuba. Belkis Guerrero, who works in a Catholic cultural center in the center of Santiago, in eastern Cuba, told Fox 29 in Miami: “We were all sitting and we felt the chairs move. We heard the noise of everything moving around.”

Alec Pultr, who lives in Ogier, Grand Cayman, told CNN, “We were simply working and things started to sway.”

The U.S. State Department warned “U.S. citizens in the affected area – check in on social media and contact loved ones to let them know you are safe.”

#BREAKING: A 7.7 magnitude #earthquake has been observed in the Carribean, between the islands of Cuba and Jamaica. While there have been no reports of a tsunami, the @USGS is monitoring this situation. pic.twitter.com/zGo6hOr1yo

Loading more stories
wpDiscuz
0
0
Would love your thoughts, please comment.x
()
x
| Reply
A 7.7. magnitude earthquake hit the coast of Cuba and Jamaica on Tuesday. Here's what you need to know.