G William Bryan, head of science and technology at the Department of Homeland Security, speaks during the daily briefing of the coronavirus task force at the White House on April 23, 2020, in Washington, D.C.

William “Bill” Bryan is the head of the science and technology directorate at the Department of Homeland Security in the Trump administration. Bryan made a presentation at the White House briefing on April 23 about ongoing studies into how warmer temperatures and light, including sunlight and ultraviolet rays, affect the COVID-19 coronavirus. Bryan is an Army veteran and longtime civil servant who has worked in the DHS since 2017 after previously working in the energy industry.

Here’s what you need to know about William “Bill” Bryan:

1. Bryan Said UV Rays & Hotter & More Humid Temperatures Could Cut Down the Half-Life of the Virus

DHS official William Bryan: "Our most striking observation to date is the powerful effect solar light appears to have on killing the virus on both surfaces & in the air. We see a similar effect with both temperature & humidity … increasing them is unfavorable for the virus." pic.twitter.com/t6NPYNwlsr

At the White House Coronavirus Task Force briefing, Bryan said that studies being conducted at the National Biodefense Analysis and Countermeasures Center at Fort Detrick in Frederick, Maryland, have shown that UV rays and humid and hotter temperatures could cut down the half-life of the COVID-19 virus. Bryan said they are working alongside scientists at Johns Hopkins University, testing how the virus in droplets of saliva and respiratory fluids survive at different temperatures and under direct light. He said the virus survives best indoors and in dry conditions.

Bryan called the work “emerging” and said the studies have shown “solar light” has a “powerful” effect in killing COVID-19. Bryan said over the past several months, the DHS has “intensified” its research and development efforts “to identify and deliver information that informs our response to COVID-19.” He said the science and technology directorate, known as “S&T,” is “working to identify, develop and deploy the tools and information to support our response to this crisis.” He said the biocontainment laboratory in Maryland is studying the virus. He shared the initial results with the coronavirus task force on April 22.

“Our most striking observation to date is the powerful effect that solar light appears to have on killing the virus, both surfaces and in the air. We’ve seen a similar effect with both temperature and humidity as well, where increasing the temperature or humidity or both is generally less favorable to the virus,” Bryan said at the April 23 briefing.

Bryan said while they are hopeful about the study, “it would be irresponsible for us to say that we feel the summer will totally kill the virus.” 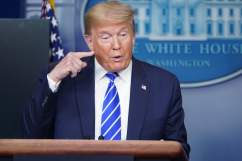 WATCH: Trump Asks if Sunlight Can Be Injected ‘Inside the Body’ to Kill Coronavirus

GettyWilliam Bryan, head of science and technology at the Department of Homeland Security, speaks while U.S. President Donald Trump listens during the daily briefing of the coronavirus task force at the White House on April 23, 2020, in Washington, D.C.

Bryan served in the U.S. Army from 1985 to 2007, leaving the service as a chief warrant officer – signals intelligence technician, according to his LinkedIn profile. He also has a master’s of science in strategic intelligence from the Joint Military Intelligence College, which he completed in 1998.

According to his biography on the DHS website, “An Army veteran with 17 years of active military service and three years in the Virginia National Guard, Mr. Bryan brings a wealth of experience gained from multiple leadership roles.”

Bryan also worked for the U.S. Department of Defense, including as director of critical infrastructure protection, from November 2001 to November 2007. He worked in the Pentagon in that role. According to his LinkedIn profile, “He led all CIP and Defense Industrial Base (DIB) related activities within this office, and advised key DOD leadership on the relevance of current CIP and DIB capabilities, methodologies, and technologies in support of military and civil homeland defense efforts deemed essential to national security.”

3. Bryan Previously Worked at the U.S. Department of Energy & in the Private Sector at ValueBridge

Bryan also worked for the U.S. Department of Energy from 2007 to 2016. He was first the deputy assistant secretary in the DOE from 2007 to 2014. According to his LinkedIn profile:

As the Deputy Assistant Secretary for Infrastructure Security and Energy Restoration in DOE’s Office of Electricity Delivery and Energy Reliability (OE), Mr. Bryan worked with the National Security Council, other U.S. government agencies, private industry and international partners to enhance the security and resiliency of critical energy infrastructure and facilitate the reconstruction and recovery of damaged or disrupted energy systems.

As a career Senior Executive, Mr. Bryan oversaw the collection, analysis, and dissemination of vital information to all involved in energy response and restoration efforts, and lead DOE in the coordination and collaboration of energy sector-related reliability and resiliency activities between the energy industry and the federal government. He also lead the collaboration efforts with the electricity, oil, and natural gas industries in the development and implementation of infrastructure protection strategies and methodologies both at home and abroad.

Mr. Bryan was hand-selected to serve as the Senior Advisor for Energy Infrastructure Security in the Office of International Affairs (IA) at the United States Department of Energy (DOE). IA responds to the most pressing global energy challenges, ranging from energy security and market volatility to long-term efforts to reduce carbon pollution and the impacts of climate change through the advocacy of renewable energy applications or other tailored energy solutions. Mr. Bryan is directly involved in energy security and resilience matters in support of DOE’s involvement in the G7, European Union and other Eastern European countries, in particular, Ukraine. This effort includes contingency planning, energy sector reforms, and direct collaboration/negotiation with the highest levels of the Ukrainian Government.

Bryan then left the government for brief period from October 2015 to February 2017. He worked as the president of the energy group for ValueBridge International, a Virginia-based company that provides, “sustainable energy solutions to improve human lives around the world.”

4. Bryan Faced Controversy About His Nomination to the DHS Position After Accusations of Corruption Emerged in 2019

GettyU.S. President Donald Trump and Vice President Mike Pence listen to Department of Homeland Security’s Under Secretary for Science and Technology William N. Bryan during the daily briefing on the novel coronavirus, which causes COVID-19, in the Brady Briefing Room of the White House on April 23, 2020, in Washington, D.C.

Bryan has faced accusations of corruption during his lengthy nomination process to the undersecretary position in the Department of Homeland Security. He is currently filling the role in an acting capacity while awaiting Senate approval. According to a 2019 report in CQ Roll Call, a whistleblower submitted a complaint accusing Bryan of using his former position in the Department of Energy to funnel business to a private energy company. The complaint was referred for an investigation by the Office of Special Counsel.

In 2018, The New York Times also reported Bryan was the subject of a whistleblower complaint about his time working in Ukraine while at the Department of Energy.

Bryan, who has not been accused of any crimes, told The Times in 2018, he “never made a dime off any of the people I knew from the Ukraine, deliberately, because I didn’t want to violate any of the ethics rules.”

5. Bryan Is Married With 4 Children & 8 Grandchildren

GettyWilliam Bryan, head of science and technology at the Department of Homeland Security, speaks while U.S. President Donald Trump listens during the daily briefing of the coronavirus task force at the White House on April 23, 2020, in Washington, D.C.

Bryan has been married to Darlene Bryan for more than 39 years, according to his Congressional testimony. They have four children and eight grandchildren.

He said during his April 2019 testimony before the Senate, “Together, we have laid a foundation built on faith in Christ, love of family, and trust — a foundation that has supported me throughout my career.”

Bryan said about his family, “Throughout their lives, they have supported me as I embarked on many opportunities to serve our country, including living in foreign lands and relocating the family multiple times. And today, they are standing by me for my greatest honor to date—being nominated by the President to serve DHS. They are my joy and I love them very much and thank them for their love and commitment along life’s journey. We are a team and I would not be here today without them.”

Bryan said during Senate testimony in 2019, “My career over the past 40 years has prepared me for this moment, beginning at the age of 19 in a suburban Detroit steel factory supervising 60 individuals and culminating with my current position as the Senior Official Performing the Duties of the Under Secretary for S&T. I have been fortunate to work in the private sector as well as having had the honor of serving the nation, including 17 years of active military service and three years in the Virginia National Guards.”

Loading more stories
wpDiscuz
0
0
Would love your thoughts, please comment.x
()
x
| Reply
William "Bill" Bryan is the head of the science and technology directorate at the Department of Homeland Security in the Trump administration.