Ewen Dewitt is a Connecticut man accused of killing his ex-girlfriend, Julie Minogue, with an ax, days after she got a restraining order against him, the Milford Police Department said in a press release. Dewitt was charged with murder and other charges in the December 6, 2022, attack, police said.

Dewitt, of Roxbury, is a retired U.S. Marine with pending assault charges from a previous domestic violence incident, court records show. Minogue, 40, and Dewitt, 42, have a child together, and had an ongoing dispute over child support and visitation, according to court records.

According to the Connecticut Post, Assistant State’s Attorney Alanna Paul told the judge during Dewitt’s first court appearance on December 7, “There’s been more information provided in this case, mainly that the defendant has entered a full admission of this incident. Even without that, I would argue that the case against the defendant is very strong. There is surveillance footage. There is a 17-year-old witness to part of this incident. It is a very serious case and I think it warrants a very serious bond.”

Here’s what you need to know about Ewen Dewitt and the murder of Julie Lynn Minogue:

1. Julie Minogue’s Son Called 911 to Say an Ax-Wielding Ewen Dewitt Was Attacking Her at Their Milford Home, Police Say, & Ring Video Shows Him Walking to the House With the Weapon

According to Milford Police, Minogue’s 17-year-old son called 911 about 9 p.m. and said his mother was being assaulted by a man at their home on Salem Walk. “The first arriving officers cleared the residence and discovered that the suspect had fled prior to their arrival. The victim was found deceased inside the home. It is believed that the suspect used an axe during the attack, however, this will be officially determined by the medical examiner.”

Police added, “The victim’s younger child, age 3, was located in the home unharmed. Both children are currently in the care of family members. The suspect, Ewen Dewitt, was later located in West Haven and taken into custody. The crime scene is currently being processed by the Detective Division.”

Ring camera video obtained by the Connecticut Post and other media outlets, which can be watched above, shows Dewitt walking up to Minogue’s house holding an axe, the newspaper reports. According to court documents obtained by the Post, officers found Minogue in a pool of blood with “multiple critical lacerations to her face and skull.”

The Post reported that Minogue’s 17-year-old son appeared to be in shock. The newspaper reported that Minogue’s son barricaded himself in a bedroom and then jumped out of a window. He told police he was in bed when he heard a man screaming, went downstairs and saw Dewitt standing over Minogue with “blood all over” and an ax in his hand, according to the probable cause report.

Police said Minogue’s children are staying with family members, the Post reported. She is the mother of three children and has an older son who lives out of state, according to her Facebook page. 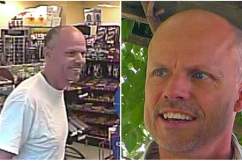 According to court documents obtained by NBC Connecticut, Julie Minogue wrote in a November 17 affidavit in an attempt to obtain a protective order against Dewitt, “I don’t feel I should be subjected to this abuse any longer. I am scared for the safety of my children.” She said in the court filing that Dewitt was sending her several harassing text messages.

Minogue also wrote in the document, according to NBC Connecticut, “Ewen has got himself into a lot of trouble with drugs and alcohol, and I’m scared he’s going to kill me.” The no-contact restraining order was issued on December 1, 2022, records show.

Court records viewed by Heavy show Minogue and Dewitt had also been involved in family court cases that started in 2021. Minogue filed a petition for child support in August 2021, records show. In October 2021, a judge ordered Dewitt to pay support. In December 2021, Dewitt took Minogue to court in a dispute over visitation, records obtained by Heavy show. A judge ordered supervised visitation for Dewitt in April 2022, records show. A hearing in the case was set for April 2023.

Minogue’s sister, Allison Barotti-Corcoran, set up a GoFundMe to help her children. Her sister wrote, “My beautiful younger sister Julie was horrifically murdered on December 6th. She was a victim of domestic violence and had tried multiple times to keep her and her children safe. Julie spent most of her parenting years as a single parent.”

Barotti-Corcoran added on the fundraiser campaign, “She navigated working full-time and caring for her boys with ease and love. (Minogue’s children) have found themselves suddenly without a mother. Any support for these three amazing boys would be appreciated. (Her oldest son) is currently serving our country in the Coast Guard, (her 17-year-old son) is a senior in high school, and (her youngest son) is an energetic 3-year-old.”

3. Dewitt Was Accused of Throwing a ‘Large Object’ at Minogue During a 2019 Assault Case, Police Say, & He Was Arrested on Domestic Violence Charges in North Carolina in 2021

According to the Milford Police press release, “The suspect was previously arrested by Milford Police in November 2019 for assaulting the victim and a Protective Order was issued at that time by the court.” Court records viewed by Heavy show that case is still pending.

Dewitt was charged with second-degree assault and risk of injury to a child, both felonies, along with misdemeanor disorderly conduct and third-degree criminal mischief in the November 9, 2019, incident. His next court date was set for April 14, 2023, records show. He pleaded not guilty and was free on $20,000 bond, according to court records.

The Connecticut Post reported in 2019 that Dewitt was arrested in that incidents after “threw a large object at a woman who was holding an infant.” Police said Minogue was the victim in that incident. According to the Post, Dewitt was also accused of destroying Minogue’s phone so she couldn’t call 911. Minogue fled to a neighbor’s house and called police, the newspaper reported.

According to court records, Dewitt was arrested in 2021 in Wake County, North Carolina. Dewitt was charged with assault on emergency personnel and assault on a female, records show. He was eventually sentenced to a combined 95 days in jail after pleading guilty to those charges, but it was not immediately clear how long he actually spent behind bars.

Dewitt was also arrested in 2006 in Connecticut and charged with operating a motor vehicle under the influence and traffic offenses. He pleaded guilty and received a suspended prison sentence and probation, court records show. 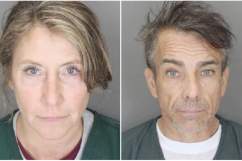 DVIDSEwen DeWitt pictured while he was in the Marines.

Ewen Anthony Dewitt served in the U.S. Marine Corps for five years and was a lance corporal in 2011. A photo from his time as a Marine is captioned, “Lance Cpl. Ewen DeWitt, a machine gunner with Weapons Company, Battalion Landing Team 1st Battalion, 2nd Marine Regiment, 24th Marine Expeditionary Unit, mounts a M2 .50-caliber machine gun on top of an internally transportable vehicle during the Defense of the Amphibious Task Force Naval qualification exercise aboard the USS Iwo Jima Dec. 3, 2011.”

According to his LinkedIn profile, Dewitt began serving in the Marines in 2009 and was a weapons specialist and non-commissioned officer and machine gun section leader in the 1st Reconnaissance Battalion. He left the Marines in 2013.

Dewitt and his brothers were profiled in a 2015 article in The Register Citizen about their efforts to rebuild a historic home. The newspaper wrote, “Prior to entering the Marines (he served several tours in Afghanistan, the Middle East and other classified locations), Ewen DeWitt played semi-professional hockey and received a bachelor’s degree in history from Siena College. He is currently taking course work to become a firefighter, and he is a personal trainer on the side.”

5. Dewitt Is Being Held on $5 Million Bond

Judge Auden Grogins set Dewitt’s bond at $5 million during his arraignment in state Superior Court in Milford on December 7. According to the Connecticut Post, Grogins said, “The allegations here are extremely serious,” and said Dewitt has “a pattern of violating court orders. … Public safety is paramount here.”

Deputy Assistant Public Defender Kevin Semataska, Dewitt’s attorney, told the judge his client has mental health issues and is a Marine Corps veteran, the Post reported. He could not be reached by Heavy for further comment about the case.

Loading more stories
wpDiscuz
0
0
Would love your thoughts, please comment.x
()
x
| Reply
Ewen Dewitt is a Connecticut man accused of killing his ex-girlfriend, Julie Minogue, with an ax, weeks after she got a restraining order against him, Milford Police say.