OnScene TV A Houston teen was shot while trying to sell a PS5, police say.

A 19-year-old was shot while trying to sell a PlayStation 5 in Houston, police say. Video from the scene shows the PS5 on the ground at the shooting scene. The victim is expected to survive, the Harris County Sheriff’s Office said. According to police, the buyer should the seller.

The shooting happened during the attempted video game console sale at 8306 Gros Ventre Lane about 1:30 p.m., police said. The popular gaming system has been hard to obtain through stores and online and a black market has emerged with PS5s re-selling for more than $1,000, according to BGR. The market value of the Sony game system, which was released in 2020, is $499.

The shooting happened outside a home at 8306 Gros Ventre Lane near the intersection of Durham Chase Lane in Houston, according to police. Video from the scene showed a muddy PS5 on the ground next to a Chevrolet Malibu. Several police vehicles were also at the scene, the video shows.

Harris County Sheriff’s Office Lieutenant Paul Bruce said at the scene that District 5 Northwest Patrol deputies were dispatched to the area for a robbery call and found a 19-year-old male with a gunshot wound to the left side. Bruce said the victim was taken to a nearby hospital and he was listed in stable condition with injuries that are believed to be non-life-threatening.

Bruce added, “Our Violent Crimes Unit is out here investigating this robbery. The victim listed a PS5 on the internet and the suspect, male, came over here to try to buy the PS5 and pulled a gun and robbed the victim.” Bruce said there is no description of the suspect available, but investigators were at the scene working to try to determine that information 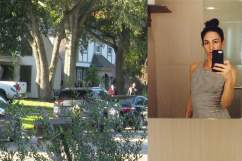 Houston Woman Mauled to Death by Her Own Dogs, Police Suspect

OnScene TVThe scene of a shooting during a Playstation 5 sale in Houston.

Police departments in Texas and across the country have created safe areas in recent years for people buying and selling items listed online after other robberies and violent crimes have occurred during sales.

“n instances where the buyer and seller are not known to each other, personal safety is an important factor in the transaction. Unfortunately, in today’s society criminals scour the internet and newspapers looking for opportunities to victimize buyers and sellers,” the Houston Police say. “In some cases, criminals may even offer for sale items that were obtained through criminal or other illegitimate means. Given these factors, it is easy to see why safety and security is an important factor in concluding transactions where the buyer and sell are not known to each other. To assist those who choose to engage in these type transactions, the Houston Police Department offers the following safety tips.”

Never meet anyone at your home whether buying or selling. Always meet in a public place such as a restaurant or shopping center or anywhere where there is a high volume of pedestrian or vehicle traffic. During business hours, a parking lot of a government institution such as a police department,
fire department, or library is an excellent public meeting location;

Avoid meeting at night but if you must then choose a location that is well lit and has a high volume of pedestrian or vehicular traffic as the presence of other people provides an additional measure of safety;

Speaking of additional people, it is recommended that regardless of the location and time you are meeting a prospective buyer or seller always take a family member or friend to observe and witness the transaction; finally,

The Houston Police added, “If you choose to use the parking lot of a police station as a meeting location to sell or exchange goods, please remember that police officers generally are prohibited from engaging in or interfering with private business transactions. Consequently, Houston Police officers will not engage in the transaction by running serial numbers to determine whether a particular item has been reported stolen or missing, nor will officers be available to witness the sale or exchange of goods. If a dispute arises during the buying or selling of goods or services remember to exercise your right to terminate the transaction.

In 2018, the sheriff’s office said, “Harris County Sheriff’s Office District 4 substation, located at 16715 Clay Road, is now offering a safe meeting place to complete person-to person sales transactions. Law enforcement will be on site from 6 p.m. to 8 p.m. on Tuesdays and Thursdays to ensure the safety of our residents while completing sales arranged on web-based shopping sites, such as Craigslist. Deputies will not be involved in sales negotiations, but will be available solely to ensure the safety of those involved.”

Loading more stories
wpDiscuz
0
0
Would love your thoughts, please comment.x
()
x
| Reply
A 19-year-old was shot while trying to sell a Playstation 5 in Houston, police say. Video from the scene shows the PS5 on the ground at the shooting scene.