New Mexico has a number of active wildfires right now, including the Cooks Peak fire and the Calf Canyon Fire. Here is the latest information about the fires in New Mexico and evacuations as of April 22, 2022. Read on for more details.

Quite a few fire maps — including interactive wildfire maps — are available to help you pinpoint where the latest wildfires are located. Remember that if you are near a fire, conditions can change quickly so you will want to pay attention to your local news sources for breaking updates.

MappingSupport.com has an interactive map available showing the perimeters of two major fires in New Mexico, the Calf Canyon Fire and the Cooks Peak Fire

You can view the interactive map for MappingSupport here.

Another map of the state is available from FireWeatherAvalanche.org here.

Inciweb also has a map of New Mexico fires here. A screenshot of the fires as of the time of this article’s publication is below. 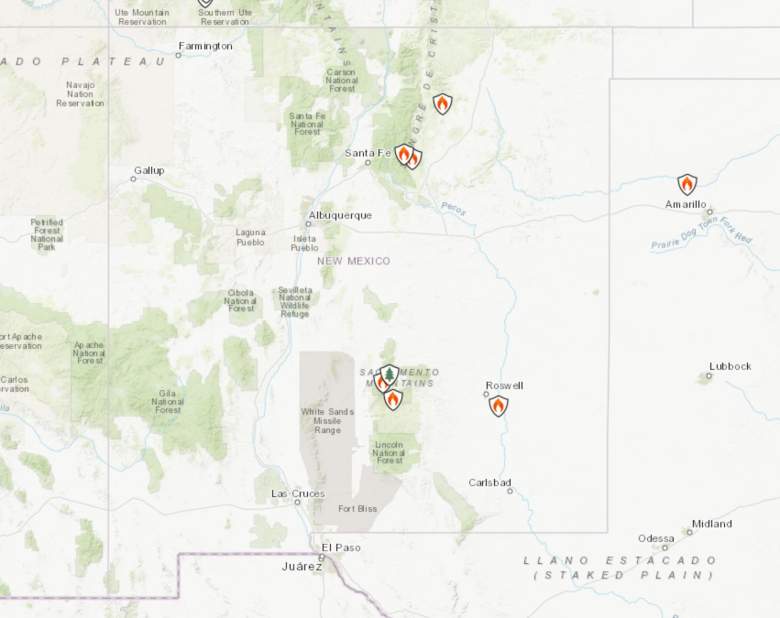 Another good resource for tracking fires in New Mexico is New Mexico Fire Information. This website provides updates on fires as they happen. They also have a Facebook page here.

A list of the major individual fires and their containment percentages is below.

According to Inciweb, the cause of the Calf Canyon Fire is under investigation. As of April 22 at 1:12 p.m. Central, the fire was still 0% contained and 3,000 acres in size. The fire is located 18 miles northwest of Las Vegas and winds have helped the fire grow larger. We’re combining this listing with the Hermits Peak Fire listing since they are so close to each other.

Inciweb noted on April 22: “The National Weather Service has issued an extreme weather warning. The public is encouraged to stay vigilant on evacuation status through the San Miguel County Sheriff’s Office and be prepared to leave in a rapid manner. Due to extremely high winds, powerlines and trees may block egress in many areas. Roads will likely become congested with traffic leaving the area, and smoke will make it difficult to see. Use extreme caution on the roads.”

The Hermits Peak fire is 7,573 acres in size as of 12 p.m. Central on April 22 and 91% contained, Inciweb reported. This one is approximately 12 miles northwest of Las Vegas. An extreme weather warning today gives both wildfires a chance of growing. 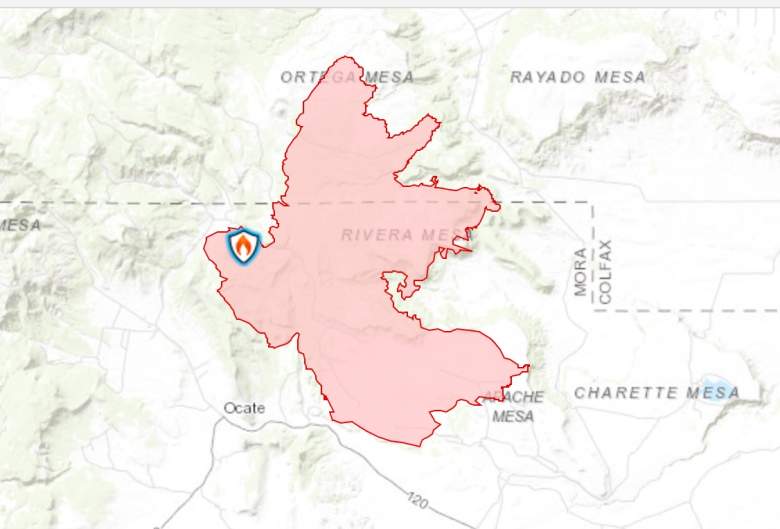 Inciweb noted: “Extreme fire behavior with spotting and group tree torching was observed on the Cooks Peak Fire Thursday, and winds are expected to increase Friday, allowing the fire to grow rapidly in multiple directions.  Air tankers and helicopters are available and were used to support firefighting efforts on the ground Thursday, but winds may hamper their ability to fly on Friday.  Additional firefighters and equipment are being ordered.”

The cause is under investigation.

Inciweb suggests signing up for evacuation updates on the Colfax County website here. You can sign up for emergency notifications here.

As of 8 a.m. on April 22, Inciweb noted the following evacuations:

Mora County – GO:  east of County Road 009 and north of NM Highway 120.  Ready:  west of County Road 009 and north of Highway 120.  These changes have occurred because of fire movement overnight and the predicted weather and extreme fire behavior expected today. Residents can evacuate livestock to the Colfax County Fairgrounds.  Memorial Middle School in Las Vegas, Wagon Mound Public Schools, and Mora Schools are available for evacuees.

The Mora and Colfax County Sheriff’s Offices are using the Ready! Set! Go! program for evacuation status that provides information on evacuation and evacuation preparation: Ready!: Be Ready! for potential evacuations. Set!: Be Set! to evacuate at a moment’s notice Go!: Evacuate now. Leave immediately. The Cooks Peak Fire is moving rapidly being driven by high winds.  Evacuation status can change rapidly, and there may not be sufficient time to prepare to evacuate.

According to New Mexico Fire Information, the James Fire has been kept at .59 acres as of 1:37 p.m. on April 22. (However, this number was later estimated to be two acres.) Firefighters have been keeping up with spot fires developing from winds.

They provided the following Google Maps location to show approximately where the fire started on private property, west of 16 Springs Road. Containment is 0%.

The website noted evacuations have been put in place for “Residents in the 16 Springs area on Highway 82 between Mile Marker 22-25.”

Inciweb shared on April 22: “Today is an Extremely Critical Fire Weather Day. There are red flag warnings in effect. Lincoln County, the Village of Ruidoso, Otero County and the Lincoln National Forest are ALL under fire restrictions or burn bans. Please do not burn debris, weld or have campfires on red flag warning days… Minimal fire activity was observed across the fire as crews continued to patrol and monitor the fire. An excavator was used alongside ground crews to support suppression repair work in the Eagle Creek area. Small pockets of smoldering debris will continue to produce smoke over the coming days and weeks. This is very common after a fire. As the fire continues to release resources, a group remains available for initial attack for any new fire starts.”

Facebook also has a page for this fire with updates here.

This fire is 412 acres in size and 84% contained as of April 22, Inciweb reported. It started on April 12 and burned six residences and eight outbuildings. It was about 12 miles west of Capitan, New Mexico. Evacuations are now lifted. The cause was a downed powerline.

According to New Mexico Fire Information, the Simona Fire is 165 acres and 25% contained as of 11:45 a.m. on April 22. It’s in Valencia County near Jarales. The fire’s being closely watched due to high winds in the region.

Valencia County Fire Department is also providing updates on Facebook. The cause is under investigation, and the fire is on private property. Two natural gas lines and a telecom line are threatened, but no homes are currently threatened. No evacuations are in place as of 11:45 a.m.