Florida State beat Notre Dame Saturday night in a game for the ages despite bing without one of its most important coaches.

Long-time FSU assistant Rick Trickett missed the game because of a health issues that multiple reports suggested was a heart attack. But Trickett was discharged from the hospital on Sunday and, true to the dedication he’s become known for over more than four decades in football, Trickett is expected to be back in his office breaking down film on Monday.

1. FSU Announced Trickett Was Out With a ‘Personal Health Issue’

Coach Jimbo Fisher announced that Rick Trickett wouldn’t be on the sidelines for Florida State’s game against Notre Dame. (Getty)

Coach Jimbo Fisher announced that Trickett would miss the game because of a “personal health issue,” but didn’t say what the issue was.

You can read Florida State’s full statement in this tweet:

Well wishes for Trickett poured in from all over on Twitter form, among others, former Texas coach and current ESPN analyst Mack Brown. 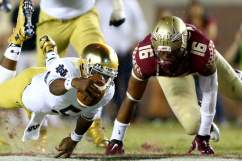 2. People Are Tweeting That Trickett Had a Heart Attack Friday Night

My thoughts and prayers go out to FSU OL Coach Rick Trickett who is in the hospital with apparent heart attack…Who's with me? #FSUfamily

Prayers for #FSU OL coach Rick Trickett who apparently had a heart attack and is in hospital. Huge reason for #Noles resurgence.

Rick Trickett heart attack occured last night. The upset win was great, but Clint playing with that on his mind is very impressive.

A handful of people, including Rivals.com national recruiting analyst Mike Farrell, are tweeting that Trickett suffered a heart attack.

Ira Schoffel, the managing editor of Warchant.com and a Florida State correspondent for Fox Sports 1, tweeted that rumors about Trickett’s “heart issue” Friday night are true, but that Trickett is “doing well.”

Can confirm rumors about Coach Trickett's heart issue last night are true. He's doing well but won't be at game. Best wishes to the family.

David Spurlock, pictured blocking during a game at N.C. State in 2008, will coach the Florida State offensive line in Rick Trickett’s absence. (Getty)

Spurlock, whose last year on the FSU roster came in 2011, played with several current FSU players.

Trickett’s son, Clint, is a former Florida State quarterback who transferred to West Virginia after the 2012 season. On Saturday, under what have must have been unimaginably difficult circumstances, Trickett played one of the best games of his career, leading throwing 3 touchdown passes as the Mountaineers beat fourth-ranked Baylor 41-27 to hand the Bears their first loss of the season.

5. Trickett Is in His 8th Year on the FSU Staff

Trickett joined the Seminoles staff in 2007, when Bobby Bowden was still the Noles’ head coach. You can watch him talking to reporters after a practice in 2011 in the video above.

Here’s how his Florida State bio describes him: