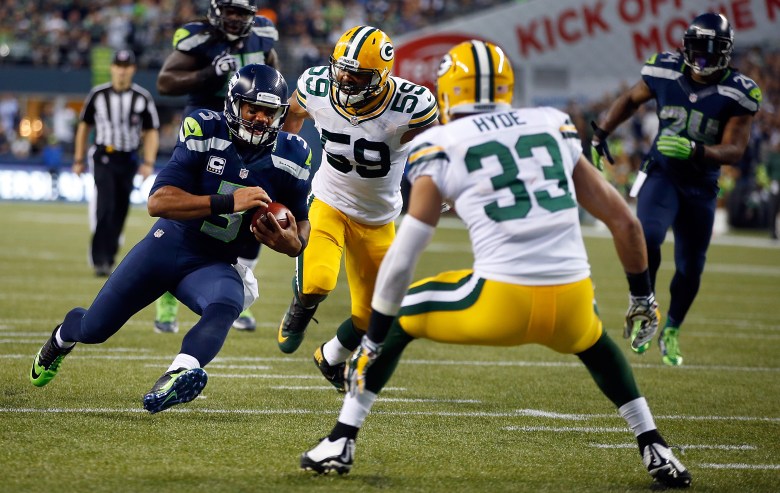 Quarterback Russell Wilson and the Seahawks play the Packers in the NFC Championship. (Getty)

In one corner, we have the Green Bay Packers. Winners of 8 of the past 9 games. They score a league-leading 30.4 points per game and their quarterback, Aaron Rodgers, is the likely MVP front-runner.

In the other, it’s the Seattle Seahawks. The defending Super Bowl Champion Seattle Seahawks. What Green Bay is to offense, the ‘Hawks are to defense. They allow a league-low 15.9 points and 267 yards per game. They have the top pass defense and 3rd-best rush D in the NFL.

On paper, Sunday’s NFC Championship in Seattle has the makings of an instant classic.

In fact, we’ve already seen this matchup this year. The team’s opened the NFL season – also at CenturyLink Field – and the Packers came out flat. Not even all the Starbucks coffee in Seattle could have perked them up that night when they were run out of town 36-16.

The oddsmakers aren’t really giving the Pack (13-4) much of a chance this time around, either. Seattle (13-4) has been tabbed as a 7.5-point favorite.

The Seahawks are playing better than any other team in the league. The Packers are playing lights out as well, but they aren’t winning as convincingly as Seattle.

It’s a matchup of the best defense vs. the top offense. You can’t ask for much more than that.

The Seahawks allowed 2 touchdowns in their win over the Panthers last weekend, but had given up just 3 in their previous 6 games. Sick. Rodgers and top targets Jordy Nelson and Randall Cobb are in for a serious battle with Richard Sherman, Kam Chancellor and Co. Must-see TV right there.

And that Seattle offense is nothing to take lightly, either. Russell Wilson is the best running quarterback in the league and makes do with a no-name cast of receivers. But Marshawn Lynch is going to be the key here. He bulldozed his way to 110 yards and 2 scores in the first meeting. Expect a heavy dose of Lynch vs. the Pack’s so-so rush defense as Seattle tries to keep Rodgers on the sideline.

The bottom line is the Seahawks don’t lose at CenturyLink Field. They are 25-2 there since 2012. And that crowd actually does make a difference. They register on seismic activity charts for crying out loud.

No offense to the fans, but you’re not the reason Seattle is going to win; the Seahawks are just better than the Packers. And they’re going to their second-straight Super Bowl. 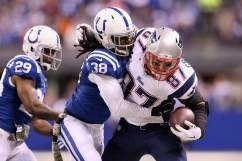