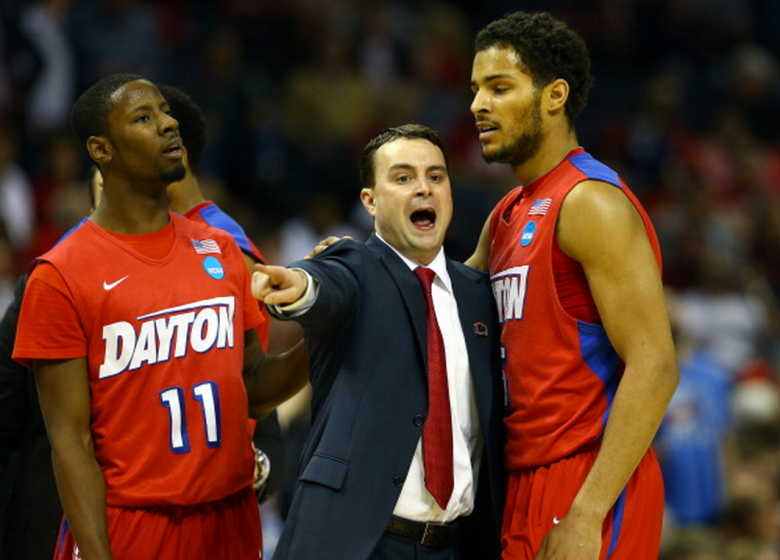 Head coach Archie Miller speaks with Devin Oliver #5 of the Dayton Flyers during a regional semifinal of the 2014 NCAA Men’s Basketball Tournament against the Stanford Cardinal at the FedExForum on March 27, 2014 in Memphis, Tennessee. (Getty)

While the Flyers didn’t receive a preseason ranking, head coach Archie Miller returned to this season hungry for more and coached his team to a second place finish in both the A-10 regular season and the A-10 Conference Tournament. The Flyers posted a 25-8 overall record, were 13-5 in the conference and received a bid from the selection committee to go dancing. But unlike last year, the Flyers will have to face-off against Boise State in the First Four, which just happens to be on hosted on Dayton’s home court – something many are predicting to follow through on providing home-court advantage.

As he preps his team for tip-off, here’s what you need to know about Archie Miller: 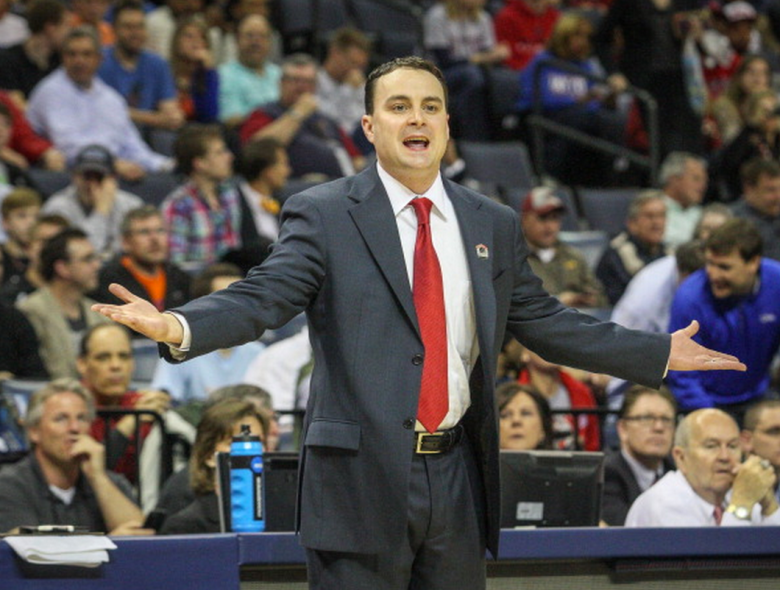 Born and raised outside of Pittsburgh, Pennsylvania, Miller grew up in a basketball family. His older brother Sean was a point guard who went on to play at point guard at Pitt, and his father, John, coached him at Blackhawk High School.

Following high school, Miller left Pennsylvania to take his talents to North Carolina State. He played for the Wolfpack from 1998-2002. At the conclusion of his four-year career as a point guard for NC State, Miller was 84.6 percent from the charity stripe, 42.9 percent from behind the arc and totaled 218 three-pointers – all of which were achievements that ranked in the top 10 in school history. 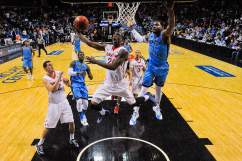 2. He Is in His 4th Season as Head Coach

The year after graduation, Miller got his start in coaching as an assistant at Western Kentucky. He stayed there for a year before returning to his alma mater as an assistant for the Wolfpack in 2004. After two years with NC State, Miller moved out west in 2006 to be the assistant at Arizona State University.

The sunshine and dessert only lasted a year before Miller returned to the midwest for the assistant coaching position at Ohio State. He held that position from 2007-09 before heading back to Arizona to coach alongside his brother, Sean, at Arizona. The Miller brothers coaching duo lasted for two years before Archie left his big brother behind to take the head coaching job at Dayton in 2011.

Since taking the helm of the Flyers, Miller has coached Dayton to the NIT in 2011-12 and the unexpected NCAA Elite Eight run last year. 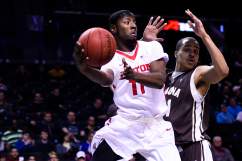 3. His Contract with Dayton Was Extended to 2019 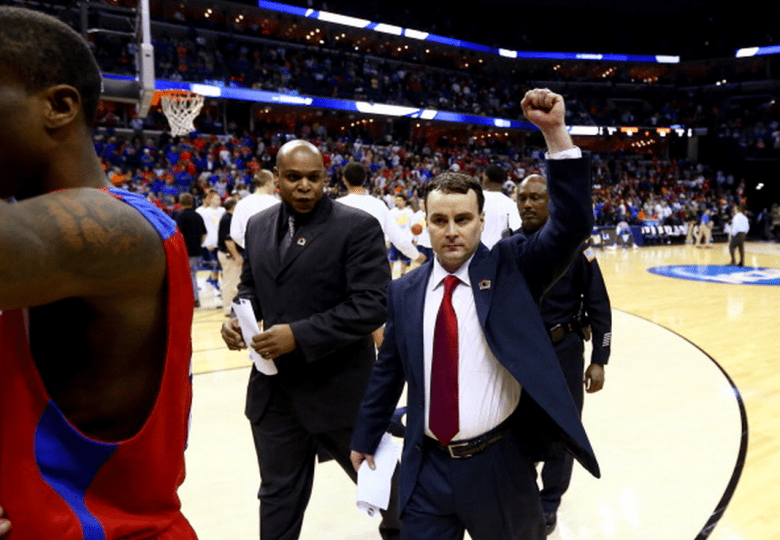 Head coach Archie Miller of the Dayton Flyers celebrates after defeating the Stanford Cardinal 82-72 in a regional semifinal of the 2014 NCAA Men’s Basketball Tournament at the FedExForum on March 27, 2014 in Memphis, Tennessee. (Getty)

Following Miller’s success with the Flyers in the NCAA Tournament, the University of Dayton offered to extend his contract to the 2018-19 season. While the agreement was discussed in December and settled in February, Miller requested it not be made public until later in order to avoid any distractions it could cause.

In a press release, University of Dayton Vice President and Director of Athletics Tim Wabler said:

The University of Dayton is committed to a national-level basketball program, and this contract extension demonstrates our belief that Archie Miller is the right leader for our program. We are proud of the academic and competitive success he has led over the last three years, and the momentum of the program is on the path we expect. We are extremely pleased to have Archie Miller has our head men’s basketball coach.

While financial terms of the new contract were not disclosed, according to USA Today, Miller ranks 47th among men’s collegiate basketball coaches with a per year salary of $335,152. 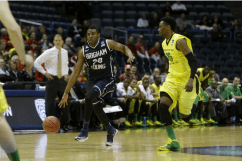 How to Watch Ole Miss vs. BYU Live Stream Online

4. His Older Brother, Sean Miller, Is the Head Coach at Arizona 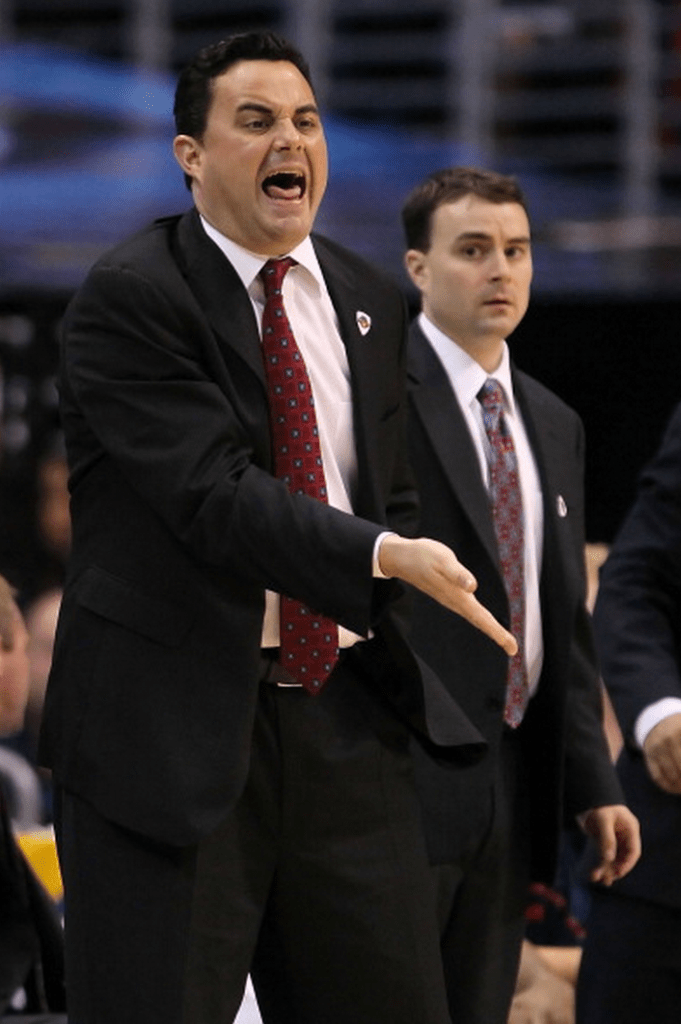 As previously mentioned, Miller, 36, grew up in a basketball family. And not only did he follow in the footsteps of his older brother to play college ball as a point guard, but he also followed down the coaching path.

Miller’s older brother Sean, 46, is the head coach of the Arizona Wildcats. Following his playing career at Pitt, Sean started his coaching career as a grad assistant for Wisconsin in 1992. After a year, he spent the next nine years as an assistant – making stops at Miami of Ohio, Pitt, NC State and Xavier.

He was an assistant at Xavier for three years before taking over the program in 2004. Then after five years, Sean took the helm at Arizona in 2009. Archie joined him as an assistant for the first two years, and since then, Sean has coached the Wildcats to the NCAA Tournament four of his six years at the helm. He even made a run to the Elite Eight two of those four appearances and has had much success with putting Arizona back on the college hoops map.

5. He Met His Wife Morgan Cruse at NC State

While attending NC State, Miller met Morgan Cruse, who was also a student and athlete for the Wolfpack. According to CollegeSpun.com, Cruse was on the NC State track and field team. The couple dating during college and tied the knot in 2003. Since then, they’ve had a daughter, Leah Grace.

And last March, it wasn’t only Miller who was grabbing attention during the tournament. Morgan’s array of Dayton inspired t-shirts and her reaction to the Flyers’ wins went viral with many taking notice.

@ervmama so happy my college bestie was here for the Dayton Victory! #Elite8 Baby! #Advance pic.twitter.com/zsbPQhMA18 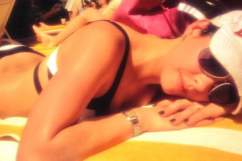