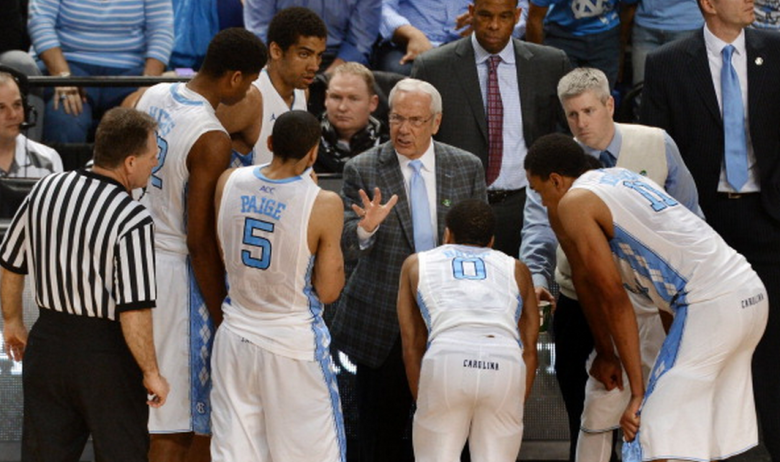 North Carolina head coach Roy Williams sets up the Tar Heels’ final possession in an 80-75 loss against Pittsburgh in the quarterfinals of the ACC Tournament on Friday, March 14, 2014, in Greensboro, N.C. Pitt advanced, 80-75. (Getty)

University of North Carolina Head Coach Roy Williams led the Tar Heels to a season similar to that of last year’s. UNC, which received a No. 6 preseason ranking, are entering March Madness with a No. 4 seed in the West region bracket, second in the nation in rebounds (41.0) and assists (17.7) per game and a regular season record of 24-11, 11-7 in the ACC and conference tournament runners-up to Notre Dame.

While the passing of former coach Dean Smith was a sad time for the program, Williams honored the legendary coach by running his famous four corners offense in their 80-69 win over Georgia Tech. The Tar Heels didn’t just run the play, they scored off it too.

Whether or not Williams will use the four corners offense during the tournament is uncertain, but one thing is for sure, UNC will be working to advance past the third round of play this year.

Until then, here’s what you need to know about Coach Williams:

1. Williams Has the Highest Winning Percentage of Any Active Coach

Williams, 64, got his coaching start in 1973 at the high school level at Black Mountain Owen High School in his home state of North Carolina. After five years Williams returned to his alma mater – UNC – as an assistant under Dean Smith.

In his 10 years as Smith’s assistant, UNC went 275-61 and won the 1982 NCAA national title. Williams also played a role in recruiting Michael Jordan. In 1988, Williams left the Tar Heels and Coach Smith to take over the Kansas Jayhawks’ program.

In his 15 years at the helm of the Jayhawks Williams compiled an overall 418-101 record, averaging 27.8 wins per years. He led Kansas to nine regular-season conference championships and four Final Four appearances, including two national championship games.

He left Kansas to return to UNC as head coach in 2003. Since then Williams has led the Tar Heels to six regular-season conference championships and three Final Four berths, two of which UNC came out as national champions – 2005 and 2009.

Williams’ success throughout his career has set him apart from other coaches. He reached 700 wins in fewer seasons than any coach in NCAA history and his 79.2 winning percentage is the highest of any active coach with 20 or more years as head coach. And he’s just one of two in NCAA history – Louisville’s Rick Pitino being the other – to have led two different programs to at least three Final Fours each.

And Williams has time to add to his resume – in 2011, UNC extended his contract through the 2017-18 season, according to Sporting News.

2. Williams Is a Hall of Fame Coach 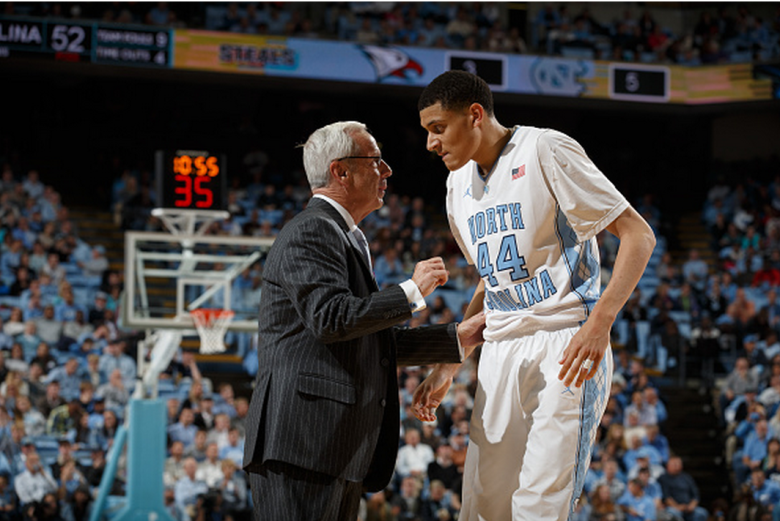 Following the 2007 season, Williams was inducted into the Basketball Hall of Fame. And that’s just one of his many accolades he’s received throughout his career.

Williams received the Naismith College Coach of the Year awarding 1997 and the John R. Wooden Legends of Coaching Award in 2003. He was also named by Forbes as America’s Best college Basketball Coach in 2009 and Sporting News named his as Coach of the Decade for the 2000s.

3. Williams Wrote and Published an Autobiography 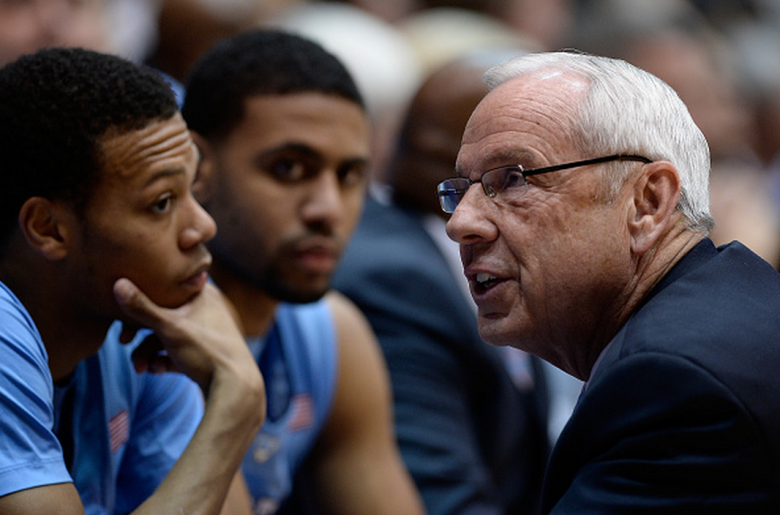 North Carolina Tar Heels coach Roy Williams talks to his team during their game against the Duke Blue Devils at Cameron Indoor Stadium on February 18, 2015 in Durham, North Carolina. (Getty)

Like other ACC coaches such as Syracuse’s Jim Boeheim and Louisville’s Rick Pitino, Williams wrote and published an autobiography.

In 2009, his book, Hard Work: A Life On and Off the Court, which was co-written with Tim Crothers, was published by Algonquin Books. In it, Williams writes about his life, his difficult childhood, the good times and bad of his coaching career and the struggles he faced when decided to leave Kansas to return home and coach at UNC in 2003.

4. Williams Had Tumors on His Kidneys 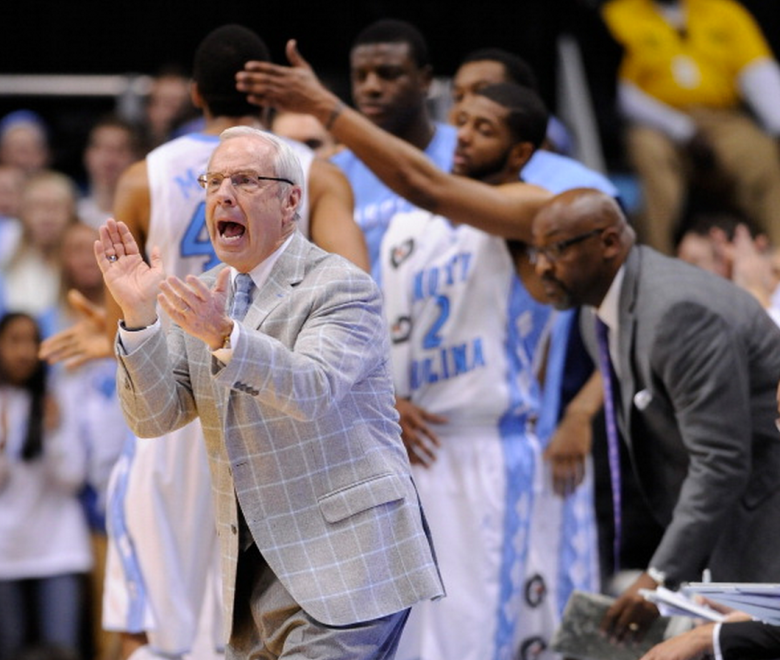 Coach Roy Williams of the North Carolina Tar Heels directs his team against the Clemson Tigers during their game at the Dean Smith Center on January 26, 2014 in Chapel Hill, North Carolina. North Carolina won 80-61. (Getty)

Prior to the 2012 season, Williams had a cancer scare. He found out he had tumors on both of his kidneys and the doctors warned him that there was a 95 percent chance they were malignant.

With frightening memories of losing his mom, who had cancer, on the operating table, Williams told USA Today he was scared to have surgery.

What did that make me think of? I thought of my mother. The surgery scared the crap out of me.

Williams not only survived the surgery, but also found out that the tumors on both kidneys were benign. But leading up to hearing the results, Williams said one thought filled his mind:

And following the good news, Williams said he was still left with a sense of fear:

There was a fear that, this is great, but am I supposed to be this blessed? It does give you a feeling of guilt, and that’s been hard for me to handle.

5. Williams Met His Wife in College 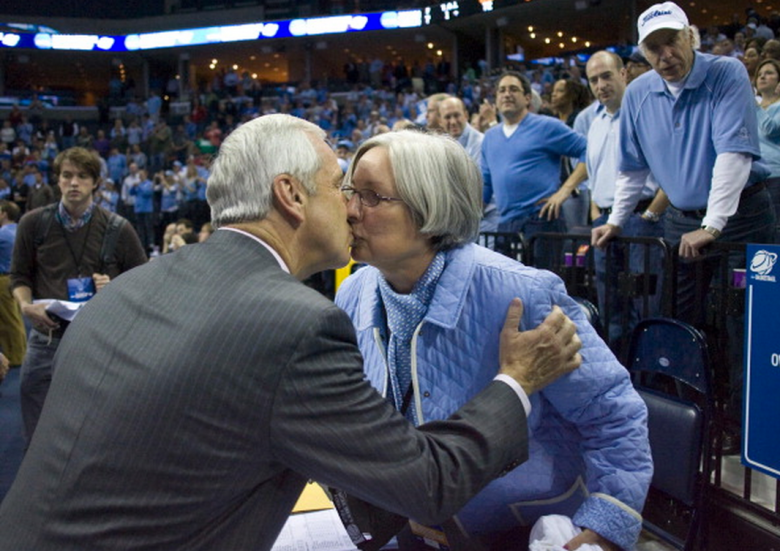 Williams studied at UNC from 1968-1972. While attending UNC at Chapel Hill he met his future wife, Wanda. Following both of their graduations in 1972, Williams and Wanda got married in 1973.

Since then they have had two children, Scott and Kimberly, and they have five Godchildren – four boys and one girl.

Similar to other coaches’ wives, Wanda has spent a lot of time working in charity, according to PlayerWives.com. She and Williams sit on the board of the Carolina Covenant, an organization that works to help make a debt free college education a reality for low income students.

The Williams’ have not only served as co-chairs to a $10,000,000 endowment campaign, but have also personally donated more than $200,000 to the foundation.