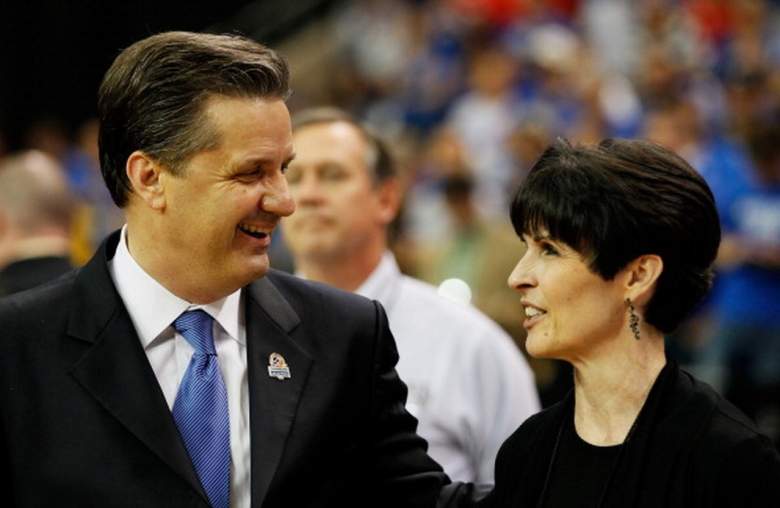 Ellen Calipari prefers to stay out of the spotlight. (Getty)

John Calipari is one of the top coaches in college basketball. While the highly successful Kentucky coach feeds off the spotlight, his wife, Ellen Calipari, does not. Ellen is just the opposite – reserved, quiet and prefers to cheer alongside the massive amount of Kentucky fans in the stands.

Ellen spoke with WKYT about their differences. “We’re about as opposite probably as you can be, as much as he’s out there I’m hiding behind the scenes, some place else,” Ellen told WKYT.
But the old saying goes, “opposites attract,” and for the Calipari’s this has held true for nearly 30 years.

While millions of people tune in to watch her husband coach the Wildcats, here’s what you need to know about his No. 1 fan in the stands.

1. She Was Previously Married to Former NFL Player Nolan Cromwell 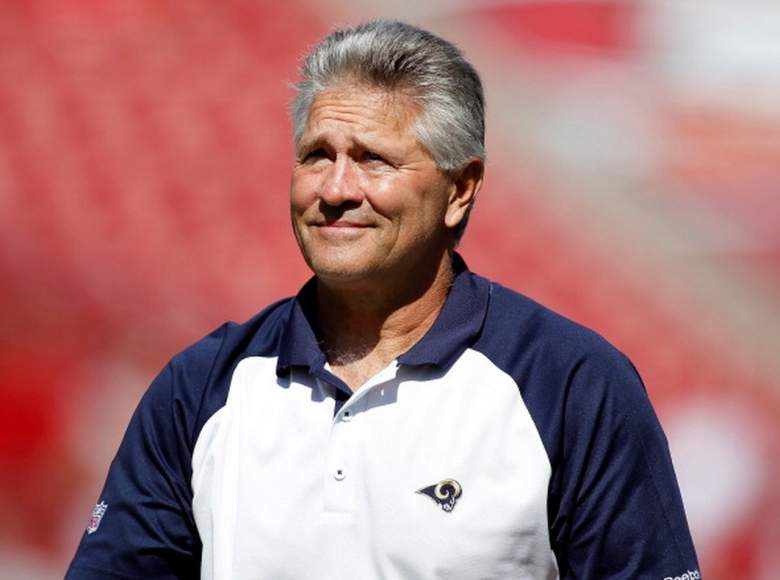 Nolan Cromwell during his NFL coaching stint with the Rams. (Getty)

Prior to meeting and marrying John, Ellen Higgins was married to another man in the sports world, former NFL player Nolan Cromwell.

After being an All-American at Kansas, Cromwell played for the Los Angeles Rams from 1977-87. During his career he was named a four-time Pro Bowl selection, Football Digest NFL Defensive Back of the Year, 1980 NFC Defensive Player of the Year and NFL 1980’s All-Decade Team.

Following his playing career with the Rams, Cromwell served as a coach for various teams including the Packers, Seahawks and most recently the Browns. He is now married to his wife, Mary Lynne Gehr, and the couple has two children – Lance and Jennifer.

2. Ellen Met John When They Both Worked at Kansas

After her separation from Cromwell, Ellen worked at the University of Kansas. While she was working as a secretary in the Kansas athletics office, Higgins met a Jayhawks’ assistant coach, John, who would eventually become her husband

John, 58, had just finished up his playing career at Clarion University (Pennsylvania) and when he moved to join head coach Larry Brown at Kansas in 1982. After meeting Ellen, the two dated and eventually got married in 1986.

Since then, John and Ellen have transitioned to Pittsburgh, UMass, the NBA’s New Jersey Nets and Philadelphia 76ers before John returned to coach college basketball. He came back to the NCAA to coach Memphis and moved on to Lexington where he now coaches Kentucky.

3. The Couple Has Three Children

WKYT – INTERVIEW WITH JOHN AND ELLEN CALIPARI – PART 1It's the first time John and Ellen Calipari have done an interview together in their home. They talk to Jennifer Palumbo about their son joining the team, their lives after UK and more.2016-11-09T23:00:50.000Z

Ellen and John have three children together – two daughters, Erin and Megan, and a son, Bradley. The couple’s oldest, Erin, 30, played basketball at UMass before earning her doctorate in neuropharmacology from Wake Forest and now lives in New York City. In 2013, Calipari wrote about his daughter on his blog.

Today, I watched my daughter Erin achieve one of her dreams by earning her doctorate in neuropharmacology from Wake Forest. I not only can barely say it, I need spell check just to spell it correctly.

That same year, Megan, who is in her mid-20’s, graduated from Cambridge School of Culinary Arts with high honors and is now a professional French pastry chef. Brad played point guard for his father on the 2016-17 Kentucky team

4. Ellen Makes Her Own Furniture Among Other Crafts 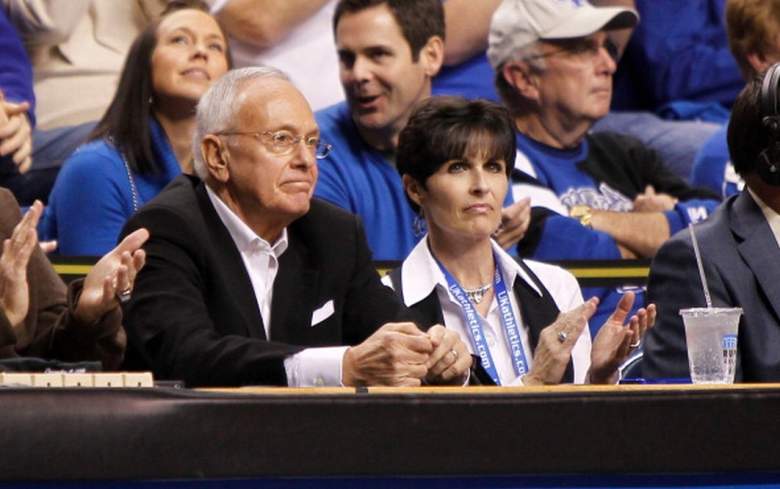 Former NBA coach Larry Brown, who John Calipari started as an assistant for at Kansas, sits with Ellen Calipari during a Kentucky game. (Getty)

While her husband’s hobby is coaching basketball, Ellen is a homemaker and enjoys crafting along with baking. “I do a lot of things, I sew, I do wood working stuff, I work in the yard, I paint rooms in the house, I like to bake, just normal things.” Ellen told WKYT.

She added she has her own special room in the basement of their home. “It’s my play room. I have a scroll saw, jig saw, belt sander, table saw and router table,” Ellen told WKYT.

WKYT noted Ellen’s homemade furniture “looks like it came straight from a catalog.”

5. She Tries to Celebrate Each Players’ Birthday 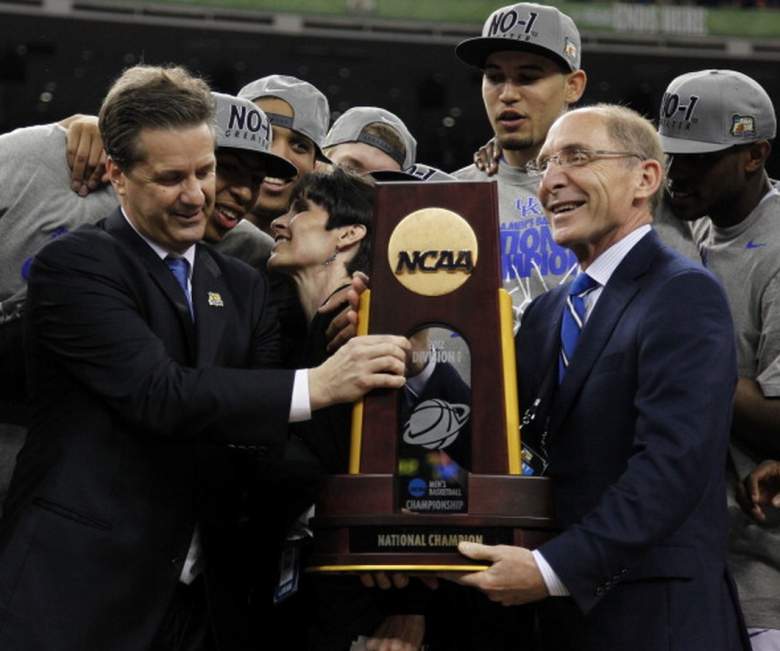 John and Ellen Calipari are joined by Kentucky president Eli Capilouto and the Wildcats team during the 2012 national championship trophy ceremony. (Getty)

Ellen admits she can never replace a player’s mother, but she does have an open door policy with them.

I don’t push myself to be another mom to them, but I feel like I want them to be comfortable here, like a mom would be.

And although she’s still working on it, Ellen said she wants to try and remember each of the players’ birthdays and do something special for them like bake brownies or cookies.

Her baking has even gone viral:

How committed was Dakari Johnson to weight loss this offseason? He gave all but two of his Ellen Calipari Birthday Brownies to Marcus Lee.

Read More
5 Fast Facts, Basketball, College Basketball, Kentucky Basketball, March Madness 2015, WAGs
Unlike Kentucky coach John Calipari, his wife prefers to stay out of the spotlight, hidden in the stands. Find out why and get to know Calipari's wife Ellen.