Brad Guzan has waited a long time for this moment.

Since joining the United States men’s national team in 2006, Guzan has waited patiently in the goalie-wings, sitting behind Tim Howard on the squad’s starting roster. But now, that time is over and Guzan is front and center as the USMNT‘s top goalie, looking to help lead the team to another Gold Cup championship this month.

With the spotlight shining a little brighter, Guzan will need all the support he can get and the crux of that support comes from his family, including his wife Breanne. Here’s what you need to know about the couple:

Guzan opted out of competing in the 2011 event for a slightly important reason; he was getting married. Brad and Breanne tied the knot on June 18 in Chicago at St. James Chapel, forcing him to miss out on the international tournament.

Of course, Guzan’s decision was partially prompted by a then-lack of playing time. Tim Howard was still very much the USMNT No. 1 goalie and Guzan was well aware that, barring some sort of injury or illness, he wouldn’t see much time in the net. Seems like he made the right decision. 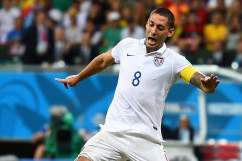 2. The Pair Welcomed Their First Child Earlier This Year

Brad and Breanne became first-time parents this year after their son was born just a few months ago. Since their son’s birth, Brad has taken to social media to post updates and photos on him but the couple has yet to really discuss their family.

One thing Guzan has been forthcoming about? His faith. Brad has publicly discussed his religion and even wrote an essay about how he combines his faith and his competitive streak on the field. He wrote:

My personal life, my faith life and my sport life – they all come together. I think they have to. You don’t have one without the others, and you have to have Jesus in your life. That is how I get through my personal life, how I get through my professional life – following Christ. He helps me through the tough times. It hasn’t always been a rosy road to success, and there are always going to be bumps along the way. Jesus helped me through all of those struggles.

3. Breanne Trolled Her Husband With a Now-Viral Text

This one was good.

Remember when Carli Lloyd landed a midfield goal against Japan in the World Cup Finals? It was fantastic and impressive and eerily similar to one Brad Guzan had once seen. Last year he had a similar midfield goal scored on him by Swansea City midfielder Jonjo Shelvey and while Guzan may have wanted to forget the moment, his wife had other plans. Check out the goal that sparked the slightly mocking text: 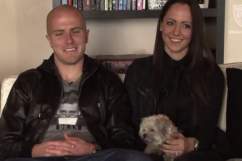 The Guzans have spent the better part of the past few years living in England as Brad competes with Aston Villa in the Premier League.

Brad joined the club in July, 2008 after Aston Villa agreed to a transfer from Chivas USA and he made his on-field debut in September against the Queens Park Rangers. But he didn’t stay with Villa for long and, in December 2010, was loaned to the Football League Championship team Hull City on a one-month deal. He described the trade to Goal.com:

It all happened within 24 hours, next thing you know I’m driving up the highway to Hull City to play my first game. I spent the night in the hotel and played on the 1st.

He returned to Aston Villa on December 3, 2011, coming on for the injured Shay Given against Manchester United. He was included on Villa’s 25-man roster for the team’s tour of the United States in 2012 and, in 2013, even recorded an assist.

5. The Couple Volunteers at the Birmingham Children’s Hospital

While living in England, Breanne has volunteered as an aid for children fighting cancer at the Birmingham Children’s Hospital and, on more than one occasion, she’s brought her husband to work with her.

The pair made headlines recently when one they visited of Guzan’s biggest fans, seven-year-old Jamie Morris, who was suffering from Acute Myeloid Leukemia. It was the same disease that Stiliyan Petrov, the captain of Guzan’s club Aston Villa, suffered from.

He’s a huge Villa fan and I seem to be his favourite. It was an honour to meet him and it’s wonderful to see how well he, and Stan (Petrov), are progressing. My respect for everybody who works with kids in hospitals is huge. If I can use my so-called fame to help ease the kids’ minds, I will.

The Guzans have remained close with Morris and were even on hand when he was released from the hospital in December 2013.

Read More
Gold Cup, Soccer, USMNT
The new USMNT goalie and his wife took the internet by storm after a now-viral text message went public earlier this week. Get to know the couple here.