Panthers quarterback Cam Newton likes to have fun. He likes to celebrate. But perhaps most of all, he likes to keep football, a kid’s game at heart, a kid’s game.

So, after Panthers touchdowns this 2015 season, Newton got into the habit of handing out the prized game ball to youngsters, typically those wearing either a Newton or Panthers jersey. One might be prone to thinking that the NFL, ever bearing the brunt of being dubbed the “No Fun League,” most recently by Panthers coach Ron Rivera, would penalize Newton for such behavior. It’s an act that Newton would not shy away from, even if other players or referees tried to actively prevent him from doing it:

Julius Peppers played keep-away from Cam Newton… but that ball was for the kids!https://t.co/lCvutfCoae

You might think those making it difficult for Newton to hand the balls away were just being considerate towards him, protecting him from the inevitable NFL slap on the wrist after giving away a league game ball. In fact, a tweet from this past December indicated that Newton was fined more than $5,000 each time he handed the ball away, accumulating a total penalty of more than $250,000 to that point.

However, those who possess those fears should rest assured. All fears should be assuaged by the fact that the league has come out and said a player can only be fined for throwing a football into the stands. You might recall that happening during the 2015 regular season to Philadelphia Eagles wide receiver Jordan Matthews, who was fined $5,787 for doing so during a Sunday night game against the Dallas Cowboys. This fine is imposed in the ball-throwing instance for crowd-control purposes, to prevent multiple fans from fighting over a ball.

But, those fines do not apply to handing the football to a fan. In fact, Newton isn’t even charged the cost of the football, which apparently was another rumor that should be stopped at this point. 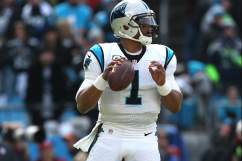 Read More
Cam Newton, Carolina Panthers, Football, NFL, Super Bowl 2016
Panthers quarterback Cam Newton has a penchant for handing away touchdown balls to fans in the stands. Is he racking up a fine or penalty as a result?