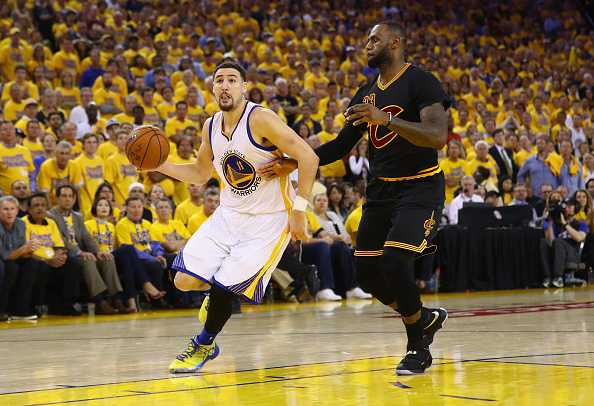 Klay Thompson has been a big part of the Warriors’ record-setting season. (Getty)

The Golden State Warriors are a win away from their second straight NBA title, thanks in large part to the hot shooting from star guard Klay Thompson.

After a league-record 73-win regular season, the Warriors were on the brink of elimination in the Western Conference Finals, trailing Oklahoma City 3-1 in the best-of-seven series. Thompson’s record-setting effort in Game 6 and contributions in Game 7 allowed the Warriors to finish an epic comeback to win the series.

As Golden State continues the NBA finals against the Cleveland Cavaliers, here’s what you need to know about Thompson:

1. Thompson Set the NBA Playoff Record for 3-Pointers in a Game

Facing postseason elimination in Game 6 of the Western Conference Finals, the 26-year-old Thompson had a game for the ages.

Thompson hit an NBA playoff record 11 3-pointers on 18 attempts in a 108-101 win at Oklahoma City. Thompson finished with a game-high 41 points, including 19 in the decisive fourth quarter. He followed up his historic performance in Game 6 with 21 points in Game 7 and helped the Warriors become only the 10th team in NBA history to come back to win a playoff series after facing a 3-1 deficit.

These eye-popping shooting numbers are nothing new for Thompson, who’s 6-foot-7. He leads all players in the 2016 postseason with 93 made 3-pointers.  In the 2015-2016 regular season, Thompson finished third in NBA history with 276 3-pointers made. He was second in the NBA this season, trailing teammate Steph Curry’s NBA record 402 made treys. He also set the record for most points in a quarter with a mind-boggling 37. 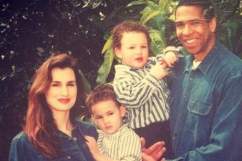 Thompson and Curry are already one of the most prolific backcourts in NBA history. (Getty)

In each of the last four seasons, Thompson and Curry have set the NBA record for three pointers made by a pair of teammates. They also were the first and second-leading scorers on a Golden State team that set an NBA record with 73 wins in the 2015-2016 regular season. They were given the “Splash Brothers” moniker way back in 2012 by Warriors.com writer Brian Witt for their shooting prowess. By 2013 then-Golden State coach Mark Jackson said the two, even then, were the “greatest shooting backcourt in the history of the game”.

Despite their combined accolades, Thompson sometimes gets overshadowed by Curry, the two-time reigning MVP. Though Curry gets most of the headlines, Thompson has held his own when it comes to individual awards. He’s a two-time member of the All NBA Team as well as a two-time All Star and NBA Three Point Contest Champion. In college, while playing for Washington State, he was a two-time first-team all-conference selection in the Pac-10.

3. Thompson is the Highest Paid Player on the Warriors

Thompson, not his two-time MVP teammate, makes the most money from the Warriors. (Getty)

So how does Thompson make more than the two-time MVP, as well as other star Golden State players like Draymond Green, Andrew Bogut and Andre Iguodala? Much of it comes down to the coming rise in the NBA’s salary cap. The Warriors inked Thompson at the start of the 2014-2015 season, locking up a rising star with a large, four-year contract before the NBA’s salary cap increase kicks in for the 2016-2017 offseason. Injected with more money following a new TV contract, the salary cap increase will mean bigger contracts for NBA players. Thompson’s $18.9 million cap hit in the 2018-2019 season looks like it could be a great value for one of the game’s biggest stars. 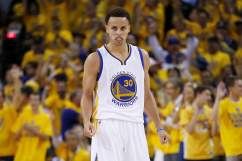 Steph Curry Net Worth: 5 Fast Facts You Need to Know

4. Klay’s Dad Played for the Lakers & Was Drafted Ahead of Larry Bird; His Brother Plays for the Dodgers

Thompson is the son of Mychal Thompson, the No. 1 overall pick in the 1978 NBA Draft- ahead of Hall of Famer Larry Bird. Unlike his son, the senior Thompson, at 6’10”, played forward and center, first with the Portland Trailblazers and later with the San Antonio Spurs and L.A. Lakers. He won two NBA championships with the Lakers while backing up Hall of Famer Kareem Abdul-Jabbar. He now works at ESPN LA 710 co-hosting a sportstalk radio show..

Trayce Thompson is having a breakthrough season with baseball’s L.A. Dodgers. (Getty)

Though Mychal stands out, the rest of the Thompson family also have acclaimed athletic careers. His mother, Julie, played volleyball at the University of San Francisco.  His older brother, Mychel, also plays professional basketball, and currently plays for the Santa Cruz Warriors of the NBA Developmental League. Another Thompson brother, Trayce Thompson, is an outfielder for MLB’s L.A. Dodgers.

5. Thompson & Fellow NBA All Star Kevin Love Have had Their Playing Careers Linked Since Childhood

Thompson and Love (No. 0) were childhood friends and teammates. (Getty)

“Kevin would come over to the house almost every weekend. We were very close to the Loves.” Mychal Thompson told the Portland Tribune.

Then in 2014, with both players in the NBA, the Minnesota Timberwolves considered trading Love for Thompson. The deal almost went through, but was nixed in part because of Warriors head coach Steve Kerr and assistant General Manager Jerry West, himself a former Hall of Fame shooting guard.

Love was eventually traded, but instead to the Cavaliers for former No. 1 overall pick Andrew Wiggins. Now, thanks to impressive post-season performances by both Thompson and Love, the two friends are facing off in the NBA Finals. 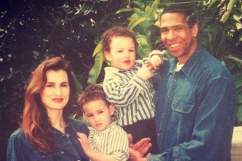