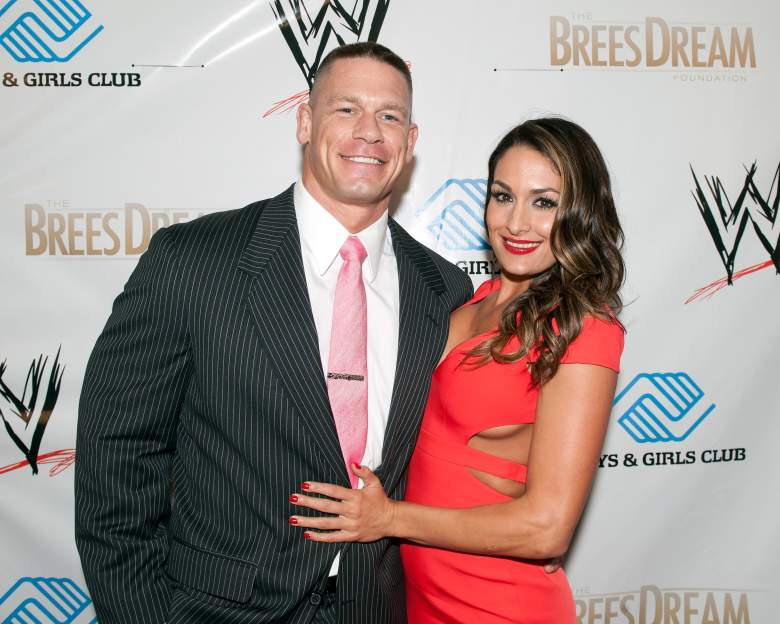 E! viewers are about to learn much more about the relationship between John Cena and Nikki Bella. The new reality series Total Bellas, which documents the lives of John Cena, Nikki Bella, Brie Bella and Daniel Bryan, has its series premiere on October 5th. It’s a spinoff of the hit show Total Divas, which will also be returning for another season this fall.

John Cena and Nikki Bella have been dating since November 2012. As of September 2016, where are they in their relationship? Have they gotten married, or do they have any plans to tie the knot anytime soon?

At the moment, John Cena and Nikki Bella are living together but are not married, with marriage apparently not in the cards for them. Not for now, at least. The reason for that comes down to conflicting views on having children, with Nikki wanting kids and John not wanting them.

That came up in multiple episodes of Total Divas. In one scene, John Cena revealed that he would marry Nikki tomorrow except that he’s worried she’ll want kids and then feel like she has to give up something for him.

Cena told Bella, “Would I love to marry you? Absolutely. I love you…What I’m afraid of, and this is the one thing I’m very much afraid of, if we were to get married tomorrow, and then you come to the conclusion that you want children, you know where I stand. In no way would I ask you to sacrifice anything for me.”

In another Total Divas episode, Cena told Bella that he feels like “there’s this time bomb over my head” because he knows Nikki wants children. Indeed, Nikki has said to Cena that she wants to be a mom and that if she didn’t have kids one day, she’d feel like she was missing out, according to E!.

Cena says he doesn’t want kids essentially because he doesn’t think he can handle it and because he thinks he would not be a good father. In an interview with Rolling Stone, Cena compared it to owning a dog, saying that he loves dogs but doesn’t have the time to take care of one.

“And just because everyone else is happy with children doesn’t mean that’s how I have to live,” Cena told Rolling Stone. “I’ve been upfront about this. I just have things I need to get done. It’s not negotiable. We’ve been to therapy over it. I don’t think it will ever be over with…I don’t want kids, I don’t want marriage. That’s me just saying, ‘Hey, this is my life and this is how I’m going to live.'”

Nikki Bella and John Cena currently reside in Tampa, Florida, where they have been living for several years now. Total Divas viewers got a tour of the house on a 2013 episode, and it’s pretty incredible, complete with a giant walk-in closet, a pool, and even an elevator that goes up to the master bedroom. When Nikki Bella’s sister, Brie Bella, first visited the couple’s house, it took her some time to adjust.

“When I wake up in the morning and see this home, I’m like wow,” she said on Total Divas. “This is definitely an extravagant lifestyle, and something [Daniel Bryan] and I aren’t used to.”

Brie Bella even said that Nikki and John’s guest house alone is way better than her apartment.

Nikki Bella, John Cena, Brie Bella and Daniel Bryan will all be staying together for three months on the upcoming reality show Total Bellas, and if the trailer is any indication, Cena is quite strict about his house etiquette, telling Brie and Daniel to change their habits and with Brie complaining that there are so many rules.

That show will also document Nikki Bella dealing with her neck injury and Daniel Bryan being forced to make the decision to retire. It airs Wednesdays at 8:00 p.m. Eastern Time on E!.