Cricket fans who want to watch a live stream of the first One Day International pitting Pakistan against West Indies — with all-important World Cup qualification positioning on the line — can find full info on how to view the match for free below, in Pakistan the United States or in India.

Scroll down the page for team information for the first ODI, as well as highlights of the third T20 International, in which Pakistan finished off a three-game whitewash of the reigning T20 World Cup holders.

Pakistan will look to bounce back from the 4-1 drubbing they took at the hands of England in the ODI series r… https://t.co/Hr9t5G41K4

The first ODI gets underway at 3 p.m. Gulf Standard Time on Friday, September 30, at Sharjah Cricket Stadium in Sharjah, United Arab Emirates. For fans in Pakistan, that start time will be 4 p.m., and in India the game gets underway at 4:30 p.m.

Fans in the United States will have an early morning start time to watch the Pakistan vs. West Indies First ODI stream live. The game starts at 7 a.m. Eastern Daylight Time, 4 a.m. Pacific.

The Pakistan vs. West Indies First ODI match in the crucial three-match series will be televised by the PTV Sports network, which is part of the government-run Pakistan Television Corporation. The PTV Sports Live streaming service offers a free stream of the match for viewers in Pakistan only. That stream can be accessed by fans in that country, with no login information required, by clicking on this link — or this link via YouTube. The PTV Sports live stream will not be available to viewers with internet IP addresses outside of Pakistan.

The Ten Sports network, a division of Sony, will air the Pakistan vs. West Indies first ODI match in India, along with an online live stream. That free live stream, however, is accessible only to online viewers with IP addresses inside India. That stream can be found by clicking here.

To watch a free and legal live stream of the first Pakistan vs. West Indies ODI cricket match, stateside fans can sign up for the seven-day free trial subscription to the Sling TV international sports package, which may be accessed at this link. A credit card will be required and the subscription price for the package is $10 per month — but canceling before the initial weeklong trial is up prevents any charges, allowing fans to watch the first Pakistan vs. West Indies ODI for free, legally.

The package of several international sports channels includes Willow TV, a network which specializes in cricket broadcasts, and will carry the entire Pakistan vs. West Indies tour of the UAE, which in addition to the ODI series will be capped off by three Test matches.

Once you’ve signed up for the Sling TV package, download the Sling software (instructions will be on the Sling TV site at the link above) for desktop computers — as well as for a variety of mobile devices.

Sling TV software is available for the Apple iOS, the Android OS as well as Amazon Fire OS. The online TV service also offers a channel on several set-top boxes, including Roku, 4th Generation Apple TV, Google Chromecast and others, allowing cricket fans to watch the Pakistan vs. West Indies ODI on their TV screen. For a complete list of Sling-compatible devices and operating systems, click on this link.

2019 World Cup Qualification is At Stake

The three-match ODI series will be a crucial one for both West Indies and Pakistan, with both sides on the proverbial bubble for an automatic qualifying slot for the 2019 ICC Cricket World Cup in England.

Only the top eight teams on the ICC ODI world rankings table gain automatic spots in the World Cup, and with qualification closing in September of 2017 West Indies currently hold the eighth position with Pakistan right behind in ninth.

A three-match blanking of West Indies by Pakistan in the UAE trilogy will vault the Men in Green over the team from the Caribbean into that coveted eighth position. And with only five ODI matches currently on their schedule until the end of June 2017, and all of them against the defending World Cup champs Australia — who also have a firm grip on the ICC Number One ranking — Friday’s ODI against West Indies is a must-win for Pakistan. As are the next two ODI matches, coming up Sunday in Sharjah and Wednesday in Abu Dhabi.

The ninth through 12th-ranked teams on the ICC table as of September 30, 2017, will be forced into a 10-team qualifying tournament in March of 2018, with only the top two finishers moving on to the World Cup the following year.

Pakistan on Tuesday wrapped up a three-match T20 International whitewash of West Indies, winning each game in dominant fashion. Watch highlights of the third match, which Pakistan won by eight wickets with 29 balls remaining, in the video below.

West Indies will have to display a sharp improvement their batting against the Pakistan spin attack if they want to hold on to their eighth spot on the ICC table, with its automatic World Cup berth. The Windies, as they were in the T20 series, will be without a quartet of their best players, with heavy-hitting Chris Gayle unavailable for selection, Lendl Simmons down with an injury and Andre “Superman” Russell pulling out of the tour for “personal reasons.”

Darren Sammy, who captained the West Indies to the T20 World Cup championship just six months ago, was fired from his captaincy by the West Indies Cricket Board — whose members also decided that the 32-year-old from St. Lucia no longer merited selection to the multinational West Indies squad.

Jason Holder, the lanky six-foot-seven 24-year-old Barbadian who captained West Indies to the quarterfinals of the 2015 Cricket World Cup, takes over from newly minted T20I Captain Carlos Braithwaite top pilot his team through the ODI series.

"We have to raise our game to contemporary standards" : Azhar Ali – See more at: https://t.co/4gZXl1DhUJ pic.twitter.com/RXXGuytQHy

On Pakistan’s side, T20 Captain Sarfraz Ahmed steps aside and new ODI skipper Azhar Ali takes over, looking for redemption after a rather dismal debut as captain which saw Pakistan drop four out of five ODI matches in England — though Pakistan also won a match against 12th-ranked Ireland on that same tour.

West Indies’ ODI form has been somewhat better, winning three of seven matches when they hosted a tri-series against Australia and South Africa in June.

Here are the protected teams for the first Pakistan vs. West Indies ODI match:

Note that Pakistan have played almost all of their home matches in the United Arab Emirates since a terrorist attack against a bus carrying the visiting Sri Lanka cricket team to a Test match in Lahore in 2009. 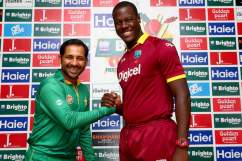