Arthur Blank, the owner of the Falcons, with his wife, Angela Macuga Blank. (Getty)

Arthur Blank, the owner of the Atlanta Falcons, is married to Angela Macuga Blank.

The 74-year-old billionaire Home Depot co-founder and his 48-year-old wife have been married since 2016.

Blank was previously married twice, first to Diana Blank and then to Stephanie Blank. He has six children with his first two wives.

Arthur Blank and his wife, Angela, celebrate after the Falcons defeated the Packers in the NFC Championship. (Getty)

Arthur Blank announced his engagement to Angie Macuga in March 2014, according to the Atlanta Journal-Constitution.

Blank and Macuga were quietly married in June 2016. Details and the location of the wedding ceremony were never made public. He casually mentioned his upcoming marriage in May 2016 during an interview with the Journal-Constitution.

Blank and his second wife, Stephanie, separated in 2011. They were married in 1995. Their divorce was not finalized until 2013, according to TMZ.

2. She Has 3 Children From a Previous Marriage & the Couple Met at Their Kids Soccer Games

Arthur Blank and Stephanie put out a statement when they split saying they “remain great friends and are committed to working together to parent their three wonderful children.”

Blank and Macuga met in 2012 while his then 15-year-old son, Joshua, was playing in a high-level soccer league along with Macuga’s children, Emily and Drew, according to the Saporta Report, an Atlanta-area sports website.

Blank called his wife “the poster child of what it means to be a soccer mom, and I mean that in a great way.”

The Falcons owner founded a soccer team in the MLS, the Atlanta United, which will begin play in 2017, after soccer became “emotional” for him through his children and wife, according to the Saporta Report.

“It is very close to my heart,” Blank said while announcing the new team in 2014. “It’s very personal to me. It’s wonderful to be able to share something with my associates, my fans, my family and my new family.”

3. Macuga Is a Longtime Volunteer With Mothers Against Drunk Driving & Is the Director of the Arthur M. Blank Family Foundation

Angela Macuga is the director of the Arthur Blank Foundation.

“Blank now commits her diverse skills to increasing exposure, funding, education and teen involvement in Mothers Against Drunk Driving (MADD) Georgia. Since 2013, she has served as the co-chair of Walk Like MADD 5k, the organizations largest annual fundraiser. With her leadership and strategic planning, MADD, the Atlanta Falcons and The Arthur M. Blank Family Foundation established a year-round partnership to expand MADD’s presence across the state of Georgia,” the website says.

She works alongside her friend, Amy Sands, whose stepson died in a drunken driving crash in 2012, according to the MADD website.

The cause is also close Angie Blank’s heart, according to Q&A she did with MADD. Her ex-husband died as a result of alcoholism:

I am the mother of teenage children who lost their father to alcohol, and the daughter of an alcoholic father. Both of these realities make my children and me victims to alcohol related tragedies. I wanted to educate my children about the dangers of underage drinking while they are still young. MADD provided a platform to help my children make better, more educated decisions when faced with very real situations involving alcohol.

My ultimate hope is that one day during my lifetime, we will be able to fulfill MADD’s mission of ‘No More Victims.’ For anyone tempted to drink and drive, please realize that one irresponsible decision can last a lifetime or have a snowball effect, such as taking the life of a family member or loved one.

Blank said about her work with MADD, “Parents have to openly communicate with their children about the dangers and effects of alcohol/drugs. Parents should have a plan in place with their children just in case they are ever put in a compromising situation of being left with an intoxicated driver. The more you openly talk to your children, the more they will engage in conversation with their parents about what is happening in their lives.”

4. She Worked in Sales & Marketing Before Turning Her Efforts to Her Husband’s Charity Foundation

Before turning her efforts to volunteer work, Angie Macuga Blank worked in sales and marketing, according to her profile on the Blank Family Foundation’s website:

As a seasoned sales, marketing and branding professional, Angela Blank now dedicates her talents to building and growing causes that she is passionate about. Beginning her career at Graphic Solutions Group, Blank was a fundamental part of growing key brands. As a consultant with GSG, Blank built strategic partnerships with significant corporate businesses and provided essential marketing needs. From there, Blank became a Premium Sales Executive with Boundless Network. As a leader in building customer relationships and account management, Blank steered influential campaigns that widely increased brand response rates and overall marketing value.

She graduated from the University of South Carolina-Sumter. 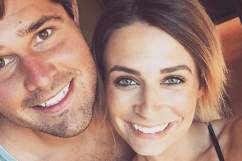 5. She Danced With Ellen Degeneres After Her Husband Bought a $8,000 Wedding Dress for Charity on Her Show

Arthur and Angela Blank appeared briefly together on The Ellen Degeneres Show in 2015 when the Falcons owner paid $8,000 to buy a wedding dress during a charity auction, according to the Atlanta Business Chronicle.

The dress was worn by Ellen in the movie Mr Wrong. You can watch a clip from the show below:

Macuga later danced with Degeneres at the end of the show, according to the Atlanta Business Chronicle.