Getty Rafael Devers, a top prospect in the Red Sox farm system, will make his major league debut Monday versus the Mariners

The question of when to bring up a talented prospect is one that has haunted and tormented general managers in Major League Baseball for years. It’s easy to preach patience during an off-season, but as the long baseball season trudges along, that patience can be harder and harder to come by, especially if a team is floundering or on the verge of falling apart.

Such is the case with the Boston Red Sox, who on Sunday announced that they would be bringing up third baseman Rafael Devers, the team’s top prospect. Since the spring, the team has routinely said they had no intentions of rushing Devers to the big leagues. But the need to call up the 20 year old Dominican has only increased since the All-Star Break. Boston is currently in first place in the American League East, but only lead the Yankees by 2.5 games and have gone 4-6 during their last ten games. The team has struggled to score runs, especially home runs, and are looking for Devers to provide a much-needed spark to a punch-less lineup.

Boston went into the season with Pablo Sandoval at third base, but Sandoval was never able to regain the form that helped the San Francisco Giants win three World Series in five years. Sandoval was released by the Red Sox last week and signed a minor-league deal with the Giants. Boston has been linked to practically every third baseman rumored to be available as the trade deadline approaches, but the slim pickings out there most likely played a factor in the Devers call up.

Devers will make his debut Monday night, as the Red Sox are in Seattle to play the Mariners.

Here is what you need to know about Rafael Devers.

1. Devers Had an Impressive Run in AAA

PawSox's Devers hits first Triple-A homer7/15/17: Pawtucket's Rafael Devers lifts a home run to right to improve to 4-for-4 in his PawSox debut against Syracuse Check out http://www.MiLB.com/video for more! MiLB.com is the official site of Minor League Baseball, MiLB leagues and its affiliated clubs, including game information and statistics, prospect news, video, online ticketing and much more. MiLB.com features…2017-07-16T03:21:54.000Z

In only 9 games with Boston’s AAA team, the Pawtucket Red Sox, Devers was nothing short of impressive. Devers made the most of his 35 at bats. He walked away with a .400 batting average, a .447 on-base percentage, 14 hits, 2 home runs and 4 runs batted in. He struck out eight times, but hey, nobody’s perfect.

Boston’s president of baseball operations Dave Dombrowski said that he had heard nothing but good things about Devers during his time in AAA, with assistant general manager Eddie Romero, farm director Ben Crockett and Pawtucket’s manager Kevin Boles all singing his praises. It wasn’t just Devers’ ability that drew praise. His composure was noted as well, with Dombrowski saying that “the consensus is that he’s a baseball player, loves to play the game.”

As far as joining the Red Sox and playing in the major leagues, Dombrowski is confident Devers is “ready to handle it.”

2. Boston Didn’t Intend Devers to Join the Club This Season

Boston management didn’t want to rush Devers along, regardless of how well he played in the minors. With Sandoval struggling, Boston not having a replacement already on the big league roster and rumors swirling about adding a third baseman via trade, Dombrowski was pretty close to adamant that Devers would not be called up prematurely.

Only two weeks ago, Dombrowski was quoted saying that the team didn’t view Devers as the solution to their hot corner problems.

We are “not counting on (top prospect Rafael) Devers at this point” to solve third base this season, Dave Dombrowski said. “We think Rafael Devers is going to be a very, very good player. But I don’t want to put it on his back that we’re counting on him in a pennant race. He should go to Triple-A and play like he’s capable of playing, and we’ll see what takes place.”

Apparently what took place was Todd Frazier being traded to the Yankees.

3. Boston Has Promoted Top Prospects During a Season Before

Devers at the 2015 All-Star Futures GamePromoting Devers, Boston’s top-rated prospect, halfway through the season might not have been the plan, but it’s not something unfamiliar to the Red Sox. If anything, it’s become business as usual.

Back in 2013, a month and a half before entering the playoffs and headed towards a World Series title, Boston called up Xander Bogaerts, a talented shortstop in their farm system. He has now become one of the cornerstones of the franchise, having been named to the AL All-Star team in 2016 and finishing the 2015 season with the second best batting average in the league. 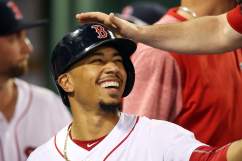 In the last two months of the 2016 season Boston called up two more of their top prospects. Outfielder Andrew Benintendi was called up at the beginning of August, while infielder Yoan Moncada was called up a month later.  Benintendi hit .295 and had 31 hits in 34 games and in 2017 was named the team’s starting left fielder. Moncada showed some promise and was sent to the Chicago White Sox after their season, the center-piece of a deal that netted Boston ace Chris Sale.

4. Devers is Still a Work in Progress at Third Base

The Red Sox asked Moncada to play third base when he was called up last season, a position he had never really played before. So in that regard, they are in a better situation this season as Devers is a natural third baseman. However, that doesn’t make him a good to great third baseman.

During his stint in AAA, Devers had four errors; not ideal for only a handful of games. Still though, scouts have said they like his range and he has a strong arm. It’ll be hard for Devers not to play the position better than Sandoval had this season, with Sandoval having committed five errors during his time in Boston.

5. Devers is Worth Picking Up in Fantasy Baseball if You Can

Rafael Devers socks a grand slam for the Sea Dogs5/6/17: Rafael Devers belts his sixth homer of the year for Portland against Reading Check out http://www.MiLB.com/video for more! MiLB.com is the official site of Minor League Baseball, MiLB leagues and its affiliated clubs, including game information and statistics, prospect news, video, online ticketing and much more. MiLB.com features live full-game video streaming and on-demand…2017-05-06T22:22:48.000Z

It’s not just the time of year to make moves in Major League Baseball, but to make some in fantasy baseball as well. Scooping up Devers is definitely worth doing if he’s still available in your league. Throughout the minors Devers has consistently been a solid power hitter. Before going to AAA a few weeks ago, Devers had hit 18 home runs and 56 runs batted in for Boston’s AA affiliate.

Of course success in the minors doesn’t automatically translate to success at the next level and Devers does have a reputation for being somewhat of a free swinger. It’d be natural to assume at least somewhat of an adjustment period as he gets used to big league pitching, pitching that is infinitely more difficult to hit that what you find in the Eastern League.