The Cleveland Cavaliers aren’t happy with the trade they agreed to with the Boston Celtics. After striking a blockbuster deal that sent disgruntled point guard Kyrie Irving to Boston in exchange for Isaiah Thomas, Jae Crowder, Ante Zizic and the 2018 Brooklyn Nets first-round draft pick, they’re now backtracking.

As ESPN’s Adrian Wojnarowski reported, the Cavaliers are seeking a potential revised agreement after evaluating Thomas’ hip injury. That was just the starting point, though, as the Cavaliers have now reportedly made it known what they want in order to have this trade go through.

As Wojnarowski also reported, the team wants either Jayson Tatum or Jaylen Brown to complete the deal.

“Now, Cleveland is going to try to inquire about a couple of the Celtics’ young players, Jaylen Brown, Jayson Tatum, who they tried to get in the original trade, that is very unlikely. But Boston still has a war chest of future first-round picks of their own, and some picks they control from other teams, and Cleveland is going to try to get one more of those to finalize this deal.”

It’s incredibly unlikely that the Celtics would agree to this after already giving up two key players, a player with upside and what may very likely be the No. 1 pick in the 2018 NBA draft. The problem? Both sides can’t really turn back on this deal at this point.

It’s highly likely that Thomas isn’t too fond of the Celtics organization currently, while Irving has already made the fact that he wants out of Cleveland widely known. There may be no going back, but this trade could wind up turning into a situation of who winds up blinking first. Will the Cavaliers just deal with Thomas’ hip injury and take what assets were already agreed upon in the trade, or will the Celtics decide to sweeten the deal?

When it comes to Tatum and Brown, these are two players who are young playmakers that the Celtics seem uninterested in parting ways with. So, seeing Boston include them in the deal would make this a completely unfair and unreasonable trade. While Irving is a great player, he’s not worth a package that could include Thomas, Crowder, Tatum/Brown, Zizic and the potential No. 1 draft pick.

That’s just too large of a package and isn’t a realistic trade for pretty much any player short of someone like Cleveland’s other superstar in LeBron James. 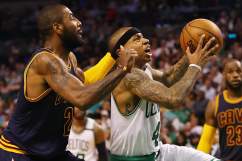