Suzanna Villarreal is the fiancee of Alex Wood, a pitcher for the Los Angeles Dodgers. The couple has been together for over 3 years, and you can see posts about their relationship on Instagram back in October 2013. She also posted that they’d been together for 1 year on July 3, 2014.

She’s active on Instagram and Twitter, posting about their relationship and re-tweeting posts about her fiancee’s performance and career.

Here’s what you need to know about Villarreal:

1. They’re Tying the Knot on November 25

According to their wedding registry at theknot.com, Villarreal and Wood will be walking down the aisle on November 25, 2017 in Dacula, Georgia. They are waiting until the baseball season is over to say “I do.” With the Dodgers playing in the world series, the wedding falls less than a month after the season will end for Wood.

The gifts are not nearly sold out, with over 100 still left to purchase on the registry with less than a month to go until the wedding.

2. Wood Proposed on a Sunset Cruise

According to howheasked, after Wood was traded to the Dodgers, the couple spent time in a long-distance relationship between Atlanta and Los Angeles. They’d been planning a getaway during Wood’s vacation, and Villarreal wanted to go to a private beach in St. Barths that was only accessible by boat or 45-minute hike. When Wood chose the boat, she got suspicious, later deciding it was probably just too much work for an athlete on vacation.

During the vacation, the couple spent a few days in St. Barths before taking a sunset cruise to the beach that Villarreal had originally wanted to visit. They took a private 69-foot yacht out to sea along with a crew. Wood played the fact that the cruise was private off as a resort upgrade.

A little while into the cruise, Wood handed her an envelope containing a letter about their relationship and love. He then got down on one knee and proposed. They then visited the beach that Villarreal had wanted to visit all along and celebrated the next weekend with friends and family in Georgia.

dinner on the edge of the world ?

Villarreal’s Twitter page says that she is a licensed realtor at Beacham & Company, an Atlanta-based realty company. The company produces the Atlanta Luxury Real Estate Magazine semi-annually to showcase homes for sale in Atlanta. The website says that the magazine is a luxury coffee-table quality magazine that is distributed in more than 50 countries.

The company was founded in 2006 and has since become one of the most successful realty companies in Atlanta. According to luxuryrealestate, the company has been the top-selling office in Atlanta and the top company for sales of homes priced $2 million and up since opening. They sell homes in several Atlanta real estate communities including Brookhaven, Dunwoody, Midtown and Virginia-Highland.

Villarreal isn’t listed under the agents portion of the site, so it’s likely that she isn’t currently practicing realty with the company in Atlanta since they both moved to LA after Wood proposed.

4. Villarreal Graduated From the University of Georgia

Like her fiancee, Villarreal attended the University of Georgia. She graduated with a Bachelor of Arts in Journalism and Advertising in 2011. During college, she was active in the Kappa Delta Sorority and Boys and Girls Club of Athens.

Villarreal was based in Georgia, moving from Athens to Atlanta and staying there until after Wood proposed. They now reside in Los Angeles.

The couple met in college, but didn’t reconnect and start dating until a few years later.

5. The Couple Met at a Pizza Place

Villarreal said that she first met Wood through a mutual friend in Georgia when they were both in college:

Upon introduction, Alex immediately offered me a slice of his pizza like I was an old friend. You know when you meet someone and you’re instantly struck by the kindness in their face? – That was Alex. I also remember thinking that he was cute ( & tall!) and seemed really genuine. Plus, he was generous enough to offer up a slice of cheese and pepperoni -major brownie (err…pizza?) points.

The story goes on to say that after, they would only say hi in passing until Villarreal was living in Atlanta and Wood was called up to play for the Braves. They lived less than a mile apart and reconnected when Wood found out that she lived in Atlanta via Instagram. After asking her to see him a few times, she said yes, and three years later he proposed. 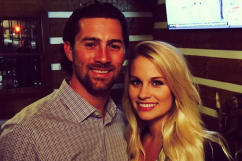