Nick Foles is back in Philadelphia, back in the spotlight and well aware that he’s not the quarterback Eagles fans were hoping to see this postseason.

That, however, hasn’t changed Foles mindset or his drive, traits he credits his family for inspiring. After all, it was his family that helped him stay with the game when he contemplated retirement after the 2016 season and, now, the tight-knit group is ready to provide another boost of support as Foles looks to lead Philadelphia back to the Super Bowl.

Here’s everything you need to know about the Eagles starter and the family that’s been behind him every step of the way:

1. Foles’ Wife, Tori Moore, Was a Volleyball Star at Arizona

The pair first met when they were both student athletes, competing for the Wildcats. Moore didn’t see much playing time early in her college career, but competed in 18 matches in 2011. Of course, the competitive duo were each other’s biggest supporters throughout college, but they were also quick to challenged each other to be better. In fact, Foles told NJ.com “She’s an athlete as well, so she knows how it goes. She pushes to make me better.”

Foles popped the question in February 2014 and the couple tied the knot just a few months later when the QB confirmed the wedding. “I have a wife now,” he said in April. “So asI am sure you guys know that are married, I’m around her a lot.”

Nick and Tori welcomed their first child in June 2017. Lily James Foles was born on June 16 and arrived with her very own hashtag. Tori announced the birth on Facebook, adding #sheisherfatherstwin.

2. His Father, Larry, Is a Successful Restaurateur 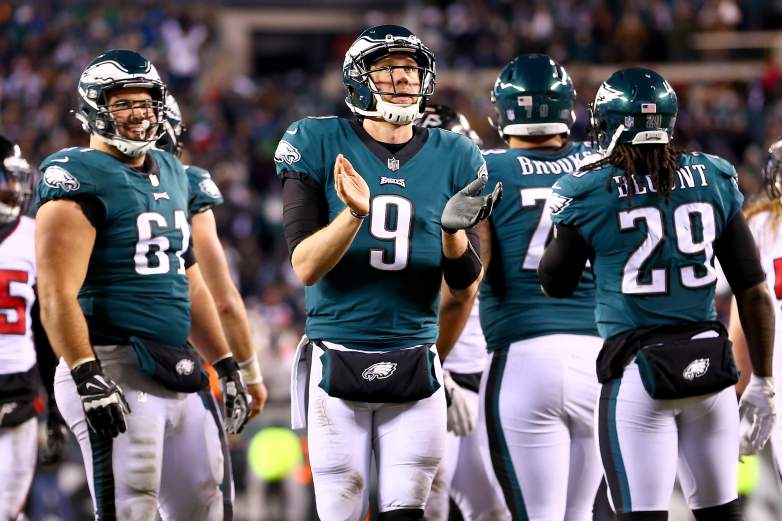 Larry Foles has been working in kitchens and restaurants for decades, starting his career as an assistant manager at Shoney’s in the late 1960s and, according to Bloomberg, quickly moving up the ranks. He opened his first restaurant, Saturday’s, in Baton Rouge in 1973, before co-owning Chez Fred’s from 1981 to 1987. In 1998 Larry began working at the Z’Tejas Southwestern Grill and Paul Fleming, expanding the restaurant to eight locations. In the late ’90s he turned his attention to Eddie V’s Edgewater Grille.

Larry and his partner Guy Villavaso launched Eddie V’s in Scottsdale, Arizona in 2000, growing the restaurant before selling eight locations to Darden Restaurants Inc. executives in October, 2011. Bizjounral reported that the deal was valued at $59 million.

According to his site, Larry and Villavso are still heavily involved in the restaurant industry, with “concepts to the restaurant group [including]: Red Ash Italia, Tumble 22 Hot Chicken (the company’s first food truck venture) and ATX Cocina, a Modern Mexican restaurant opening mid-July 2017 in downtown Austin.” 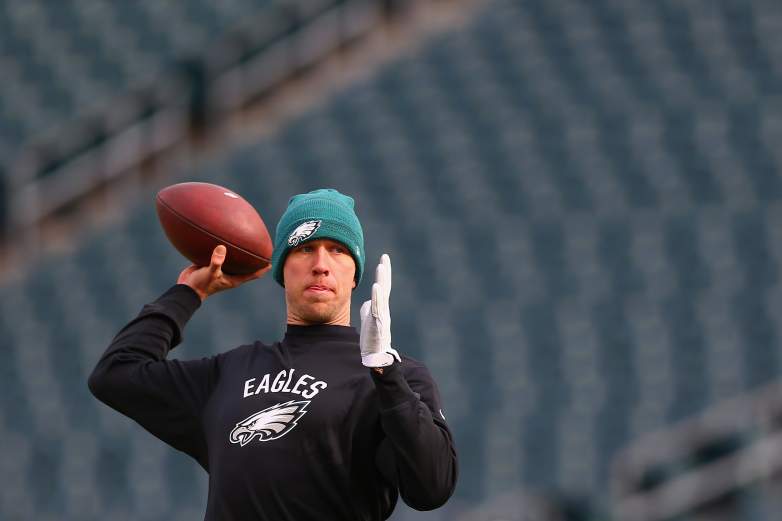 ‌It’s not in Foles’ makeup to put partial effort into anything and there’s one person he credits for that approach – his mother.

Melissa Foles isn’t an NFL player, but she’s as athletic as anyone, teaching fitness classes that include yoga, weight training, cardio and kickboxing. Her son is a frequent student in those classes. He told Delaware Online:

My mom, she can still kick my butt in anything. When you have your mom kick your butt, you can’t help but stay humble. I’ve seen guys go in there, full-grown men that work out all the time, go into that class and leave throwing up. And they never come back … because all these women are absolutely crazy when they work out, screaming, music. But it’s fun for me.

Foles grew up watching his mom get other people in shape and Melissa didn’t shy away from fine-tuning her son’s approach either. She regularly woke him up at six a.m. for morning workouts and that routine held true even after Nick became an NFL quarterback. After all, there’s something to be said for getting your “butt kicked” by your mom to help jumpstart your drive.

4. His Brother-In-Law Also Played in the NFL 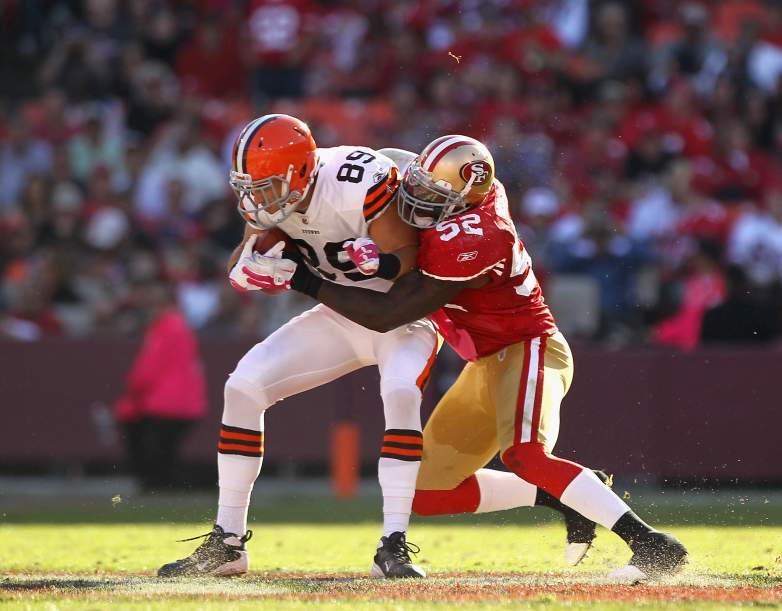 ‌Foles isn’t the only NFL player in the family. His brother-in-law, Evan Moore, also played professionally, suiting up at tight end for five seasons including a stint with the Eagles in 2012.

Moore, who played college football and basketball at Stanford, split time in Philadelphia and Seattle during the 2012 season, after three years in Cleveland. He played 33 games with the Browns, including six starts in 2010 and 2011. Moore wrapped up his career with 810 receiving yards, 63 receptions and five touchdowns.

A bit of a do-it-all talent,  Moore co-founded Strattford Capital, LLC, a private real estate investment firm located in Newport Beach, CA after leaving the NFL. He studied at the NFL Business Management and Entrepreneurial program at Stanford Graduate School of Business while playing and still stays close to the game, working as a part-time analyst for Pac-12 Network and Fox.

5. He Calls His Parents ‘My Heroes’ 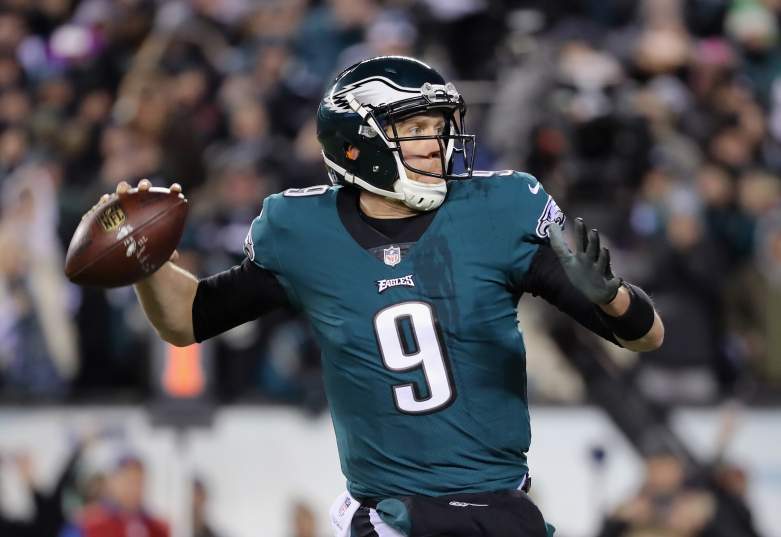 It’s been a difficult road to picture-perfect family for the Foles.

Larry Foles grew up inMississippi and, according to Nick, started working to provide for his family when he was just 18 years old. Melissa Foles, meanwhile, lost her mother in a car crash when she was only 11 and that kind of tragedy helped sparked the strong-willed, determined mindset throughout the entire Foles family, particularly Nick.

Both of my parents are my heroes… Just to know where they came from and how their outlook on life is is amazing. My parents always instilled the qualities of knowing where you came from, being grounded. … I’m thankful for them.

Foles credits his parents for his work ethic and keeping him focused on what’s truly important. The Eagles QB isn’t one to draw headlines off the field, more likely to spend the night at home after practice or before games. In fact, Philadelphia center Jason Kelce told Philly.com “If you’re having a few guys over to the house, or if you want to go grab dinner, something like that, he’ll definitely be in for that.”