Lindsey Vonn is the most decorated female ski racer in history. She will be competing in several alpine skiing disciplines in the 2018 Winter Olympics in PyeongChang, South Korea, over the next week. She has won one gold medal and one bronze medal (both in Vancouver in 2010), and is hoping to end her Olympic career on a high note.

“Well… after 8 years of waiting I finally get a chance to compete in the Olympics again. This time I have a more important mission; win for my late Grandpa. He will be watching from the best seat in the house, hopefully looking out for me and guiding me down the mountain. I will leave it all out on the hill tomorrow and have no regrets,” she posted on Instagram before her first run of the 2018 Winter Games.

Vonn’s successful career hasn’t been without its challenges, however.

In 2013, Vonn injured her right knee and needed surgery, followed by several months of rehab. She recovered ahead of schedule and was preparing to head to Sochi, Russia, for the 2014 Winter Olympics, but she reinjured her knee weeks before she was set to leave for the Games.

In 2013, Vonn was racing in the super-G event at the Alpine World Championships in Austria when she crashed. Things appeared to be going well for Vonn, who ended up landing awkwardly after a small jump, about 40 seconds into the run. She completely lost control and tumbled down the mountain, yelling out in pain, which you can see and hear in the video above.

Spectators looked on in disbelief as Vonn laid still in the snow. A few people, believed to be officials or medical personnel, rushed out to help her.

Shortly after the crash, the United States ski team’s medical director, Kyle Wilkens, confirmed that Vonn had torn the anterior cruciate ligament (ACL) and medial collateral ligament (MCL) in her right knee. Her actual diagnosis was a tibial plateau fracture — she had torn knee ligaments, coupled with a knee fracture, according to the Los Angeles Times.

This is a relatively common injury, especially for athletes, but it is one that requires surgery and a fairly long recovery time — anywhere from six to nine months. It goes without saying that Vonn was forced to end her season early.

Vonn underwent reconstructive surgery and began her rehab process, determined to get back to the slopes as soon as she was cleared to do so. 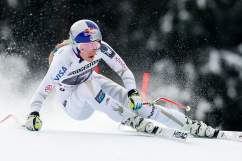 WATCH: Lindsey Vonn’s Crash That Caused Her Knee Injury in 2013

2. She Reinjured Her Knee & Was Forced to Miss the Sochi Olympics in 2014

Vonn got back to skiing in late 2013. However, in November of that year, she crashed during a training run and ended up re-injuring her recently rehabbed right knee. Vonn put some ice on her leg and moved forward, determined to stay focused on the 2014 Winter Games.

At the time, she said that her ACL was partially torn, but she was going to be able to pull through. About two weeks later, however, another fall during the World Cup downhill at Lake Louise in Canada  further aggravated her knee. Still, Vonn pushed forward, skiing three times in the event, not once reaching the podium.

In December, Vonn competed in the World Cup downhill in Val d’Isère, France.

“About halfway through the course, her right knee buckled as she tried to make a high-speed turn, and she skidded off the course. After the race, for the first time, Vonn acknowledged her A.C.L. injury was more severe. She said the ligament had been ruptured,” the New York Times reported.

“Surgery was successful! Resting with loved ones and of course my cuddle buddy Leo. So thankful to have such great people helping me. Will update more later,” she wrote on Facebook at the time.

But Vonn was forced to it out the 2014 Sochi Olympics.

“I am devastated to announce that I will not be able to compete in Sochi. I did everything I possibly could to somehow get strong enough to overcome having no A.C.L., but the reality has sunk in that my knee is just too unstable to compete at this level. I’m having surgery soon so that I can be ready for the world championships at home in Vail next February. On a positive note, this means there will be an additional spot so that one of my teammates can go for gold. Thank you all so much for all of the love and support. I will be cheering for all of the Olympians and especially team USA,” she wrote on Facebook.

3. She Still Ices Her Knee After Every Workout

I’ve put in the work. Excited for the last races this weekend before heading to the #Olympics! Let’s go! ?? (? Plamen Dimitrov for @nytimes)

Vonn has a pretty rigid workout routine that helps keep the muscles in her leg strong. In fact, she admits that she spends more time in the gym than she does with skis on her feet.

Although Vonn’s knee is healed, she still does physical therapy. Vonn has been under the care of physical therapist Lindsay Winninger for more than two years.

“After the [2014] Olympics, Lindsay continued working in the ski racing world as skier Lindsey Vonn’s private full time physical therapist for two and a half years. She brought Vonn back from multiple injuries which allowed her to break the record and earn the title of The Greatest Female Ski Racer Of All Time,” reads Winninger’s website, in part.

Additionally, after each one of her intense workouts, Vonn ices her knee.

“I have to ice my right knee after every workout for 20 minutes,” she recently told the New York Times.

Whenever she’s preparing to ski, Vonn makes sure to take precautions to protect her knee by warming up and stretching.

“When I warm up in the morning, I need to warm up my knee first, for 15 minutes. Then I have to bike, I have to stretch, I have to do all these extra steps that I didn’t have to do before,” she said during a press conference on February 9. 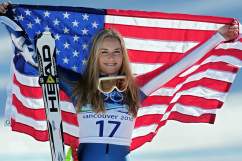 4. She Didn’t Compete in the Slalom Events in PyeongChang Because of Her Knee

A few days ago, Vonn decided that she wouldn’t be competing in the slalom events. According to CBS North Carolina, Vonn didn’t think she would be able to medal in the event, so she didn’t want to put any unnecessary strain on her knee.

In her words, “there’s really no point” in competing and pushing her limits if she doesn’t have to.

Vonn will be competing in the super-G, women’s downhill, and the women’s combined.

“I want to end on a high note. I really want to put an exclamation point on my career. It took me until my third Olympics how to figure out how to deal with the pressure,” she said during a press conference on February 9. “This is probably my last Olympics, I am soaking in every moment, I am still in awe of being able to represent my country. I’ve had a lot of ups and downs since Vancouver but I feel like I am coming into these Olympics on a hot streak, I am skiing exceptionally well and I have a lot of confidence,” she added.

5. She Has a Metal Bar in Her Arm & Has Suffered Several Other Injuries Over the Years

In November 2016, Vonn crashed during a training session and fractured her humerus bone.

“I crashed while training in Copper and badly fractured my humerus. I had surgery in Vail last night and everyone took great care of me. I will work my hardest to be back on the slopes as soon as I can, as I always do.,” she posted on Instagram, along with a photo of her x-rays.

Below is a photo of her stitched up arm.

Yup, that's gonna leave a mark ??… on the bright side it's better to have that on my arm than my leg… #scars

“I have a huge metal rod in the whole length of my arm. I lost feeling in my hand for several weeks. It was lifeless,” she previously told the New York Times.

In addition to troubles with her right knee — and her arm — Vonn has suffered several other injuries over the course of her career.

She suffered a finger fracture in the 2010 Olympic Games in Vancouver, a concussion during training at the 2011 world championships in Germany, and a hair-line fracture in her left knee during the super-G at the World Cup in Andorra in 2016, according to CBC Sports. She has also suffered her fair share of other minor injuries — like sprained ankles — over the years as well.

Below is a video of Vonn’s Super Bowl commercial. It has been airing during Olympics coverage for most of the week. In the video, you can see some of Vonn’s scars. 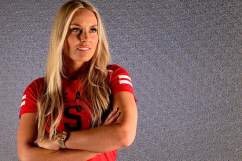 Lindsey Vonn’s Net Worth: 5 Fast Facts You Need to Know