Getty Sean Miller has a habit of sweating, which is sure to make its way into a few bracket names.

By the time the second weekend of the NCAA tournament hits, most of us will have ripped up our brackets. Your bracket name lives on regardless of your score, and we are here to help you get all the laughs from your office pool. Maybe picking the right name for your bracket can even help you have some success with your picks. Look good, feel good and play good as March Madness arrives.

Where can you fill out a bracket? The usual suspects are back, and offer different incentives to fill out your free bracket. Yahoo Sports is offering fans a chance to play against Draymond Green, and the winning bracket gets $25,000. CBS Sports is boasting a fully customizable scoring system for your office pool. They are also offering a all-expense-paid trip to the 2019 Final Four. If you’re wanting to start over each round, CBS Sports also offers a Round by Round contest where you pick the winners once the matchups are set after each round.

ESPN’s Tournament Challenge offers one of the best mobile apps, and a bevy of prizes including a $10,000 Amazon gift card, as well as a trip to the 2018 Maui Invitational. ESPN is also offering the Streak Game where the winner earns $5,000.

With the college basketball season closely resembling the movie Blue Chips, there are plenty of ways to incorporate the latest FBI investigation and college basketball scandals into your bracket name. We have you covered with a plethora of naming options ranging from Sean Miller to Rick Pitino. Don’t see your name included on our list? Add your favorite bracket name in the comments section below.

Here’s our list of the best bracket names for the 2018 NCAA tournament.

GettyThere are no shortage of bracket names referencing Grayson Allen’s past antics on the court.

Outside of Durham, Grayson Allen will never become the most popular college basketball player in the country, but his image has undergone a slight transformation. For the most part, the 2017-18 season was absent of Allen tripping opponents and getting suspended. Duke haters still have plenty of ammo on Allen from years past.

Nelly inspired this team name with his famous line “I’m kiddin’ like Jason” in the song “Hot in Herre”. It is just slightly altered to fit our college basketball needs.

Nothing says March quite like a good NCAA scandal. ESPN’s Mark Schlabach reported there is a wiretap of Arizona coach Sean Miller discussing a plan to pay Deandre Ayton $100,000. Miller has since emphatically denied the report leading to a very public feud between ESPN and Miller.

By the end of March, we will probably be tired of pay-for-play jokes, but right now there are still plenty of funny ways to incorporate the scandal into your bracket name.

What has become clear is the NCAA will have big decisions to make in the off-season as the current rules and structure continue to appear antiquated. The Ringer’s One Shining Podcast often jokes about college basketball’s “bag man”, the people secretly dropping bags of cash for recruits. This name honors the secret bag men that make March Madness possible.

This name is courtesy of Reddit user ManBlaccPajamas playing off the well-known band My Morning Jacket. This one also has a lot of potential for logo designs. One tip as you are filling out your bracket. According to NCAA.com, the No. 12 seeds win almost 36 percent of their games, a surprisingly high number for an underdog. Try to identify one or two No. 12 seeds that could pull off an upset, just make sure not to pick them to go past the Sweet 16 as they rarely make a deep run.

There seems to be a connection between Jay-Z songs and Tom Izzo bracket names. Throughout the years of bracketology “H to the Izzo” has been a popular name. This year, we turn to the “Watch the Throne” album for our best Izzo bracket name. This name comes courtesy of Athlon Sports. Michigan State’s season has been surrounded by controversy, and the team was upset in the Big Ten tournament. The Spartans are still one of the most talented teams in the country, and have the players to make a deep tournament run.

This is a combination of a name that sounds like a law firm and the famous Wizard of Oz saying “Lions, Tigers and Bears”. Marvin Bagley stands a good chance of leading Duke to several March Madness wins. Mo Bamba’s future is less certain as Texas had no guarantee of making the tournament. Regardless of how the tournament plays our for Duke and Texas, Bagley and Bamba are likely headed to the NBA as high lottery picks.

This is for the select few that stick to their convictions by only filling out one bracket. This is an honorable stance, although I fill out about 20 brackets every NCAA tournament. The phrase was made popular by ESPN’s Mike Greenberg who believed each person should enter the same bracket in multiple pools.

Trae Young got off to a hot start, but cooled off down the stretch. During the regular season, Young had four games with 40 or more points. Young has had nine games with 30 plus points. Despite his recent slump, Young is still one of best scorers in the country. He is the type of player that can get hot in the tournament, and propel Oklahoma into a solid tournament run.

As time passes, the worse things look for Rick Pitino, who was fired by Louisville amidst a pay-for-play scandal. Pitino called a recent press conference to try to clear his name, but did not come off as very believable. Pitino continued to deny any wrongdoing in the press conference per ESPN.

In 40 years of coaching, I have never been involved, directly or indirectly, in any effort to pay any money or extend any improper benefit to any recruit or any recruit’s family members or representatives. I knew nothing about any agreement to make improper payments, and had no reason to suspect any illegality in the recruitment of any athlete in my programs. I never engaged in any improper communication with anyone, or had any part in such effort — overtly, covertly, in code, through nuance, or in any other way.

Whether it is the ESPN controversy or Miller’s propensity to sweat, the Arizona coach will be well-represented in a bevy of bracket naming options. Miller made news during the 2016 NCAA tournament after sweating through his white dress shirt. Unfortunately, Miller was not wearing an undershirt, and this image has created one of the great college basketball memes of our time.

now we know why sean miller was always sweating. worried the fbi might find out lol pic.twitter.com/FWXgjubLKN 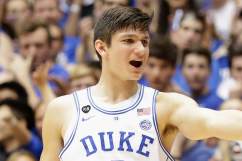