Patrick Reed went into the final round of the 2018 Masters headed for a seemingly storybook ending. Patrick attended Augusta State, and his parents, Bill and Jeannette Reed, also live in Augusta, Georgia. However, multiple reports indicate there is tension between Patrick, his wife Justine and his family.

The feud turned very public in recent years with social media posts, and his parents reportedly being asked to leave a PGA Tour event. What caused the family feud depends on who you ask, with Justine citing Patrick’s abusive upbringing as their reason for not communicating with his parents. Patrick’s family has denied there was anything abnormal about the way Patrick was raised.

If Patrick has reconciled things with his parents, it has not been made public. Patrick’s mother’s Twitter account is full of posts about Patrick’s golf career. At times, she also includes more personal anecdotes, such as this one posted on August 5, 2017 along with a photo of Patrick as a baby.

“HBD 2 my Patrick! May ur day be filled with many birdies & eagles! Miss you, Brat! ????❤️#27 #patrickreed #muchlove,” Jeannette tweeted.

Learn more about Patrick’s relationship with his mom and dad.

GettyPatrick Reed with his wife Justine at the Masters Par 3 Contest.

You, nor anyone else know anything about Patrick and I or our private lives. His parents verbally and physically abused him for most of his life, abused alcohol, and would get in fist fights with him in the parking lots after bad rounds. Patrick was seen as a ‘meal ticket.’ Not my words, his. I love my husband and we have a beautiful daughter, Windsor-Wells Reed, and obviously NONE OF YOU KNOW my husband because NO ONE controls him. He is a man who makes his own decisions and as his wife, I help make decisions for our family and our lives. We are a team. The last thing I would ever want for my daughter is to grow up in an environment like my husband did. This is no sob story, we don’t have time for that. This is the truth. And if the media’s perception of him is obscure it’s only because of his parents doings. Who talks about their children the way they did and write about him in a book? They are sick people and need help. Time will tell all. And people are starting to wake-up and realize what kind of people his parents really are. You all should pick up the book: Breaking the Bonds of Adult Child Abuse. Yes, there are actual books on people like this, I am an RN and they are textbook cases. 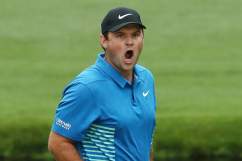 2. Patrick’s Parents Were Escorted Out of the 2014 U.S. Open by the Request of Patrick & Justine

HBD 2 my Patrick! May ur day be filled with many birdies & eagles! Miss you, Brat! ????❤️#27 #patrickreed #muchlove pic.twitter.com/wstGCrlJpb

Just as the social media posts indicate, the feud between Patrick and his parents took place in front of the country. After his parents attempted to attend the 2014 U.S. Open when a friend had extra tickets, Golf.com reported they were escorted off the course at the request of Patrick and Justine.

Noticeably absent are Patrick’s parents, Bill and Jeannette, and his younger sister, Hannah, who reside in Augusta. They were not invited to his wedding in December 2012, which Jeannette believes is because she and Bill had suggested that Patrick was too young to get married. When Patrick made his Masters debut a few months later, they were not inside the gates of Augusta National. They’ve had no contact with their son since he got married, despite repeatedly emailing him and reaching out through intermediaries. A friend of Bill and Jeannette’s had extra tickets to the 2014 U.S. Open, so with some trepidation, they went to Pinehurst No. 2 and followed Patrick throughout the second round. Justine was also in the gallery, but no words were exchanged. Walking up the 18th hole, Bill, Jeannette and Hannah were surrounded by police officers. They ultimately were escorted off the grounds and had their tournament badges confiscated by a USGA official who, according to Jeannette, said he was acting on Justine’s wishes. (Patrick and Justine declined to comment on any aspect of their relationship with his parents.)

3. Patrick’s Sister, Hannah, Posted on Facebook That Her Brother Accused Her of “Faking 2 Kidney Surgeries to Get Him Back Into My Life”

Patrick’s sister Hannah made her own Facebook posts refuting Justine’s allegations of Patrick’s upbringing. The post included mention of the two not communicating, and Patrick’s accusation that she faked kidney surgeries to “try to get him back in my life.”

While many people may not know, I am Patrick Reed’s younger sister. Growing up Patrick and I were closer than normal. Over the past few years, I have sat back and watched the numerous and disgusting accusations his wife, mother-in-law and everyone now associated as his family have made. Patrick is not the same person he used to be. He accused me of faking my own two kidney surgeries to get him back in my life, completely disowned me, never wishing me a happy birthday, congrations [sic] for graduating, etc. I have reached out to him various times and get no response. This is not a brother anymore, but a selfish, horrible stranger and it’s heartbreaking. He had an AMAZING life. My parents gave up EVERYTHING for his dream of becoming a golfer. How can you win events and not thank your parents? They are the reason you even have the best possible chance of achieving your dream. There was NEVER EVER any abuse mentally or physically, abuse of alcohol, or fist fights in the parking lot because he had a bad round. The fact that Patrick is allowing his new family to say that is insane. From growing up with him first hand, I know the TRUTH. I am sick and tired of Patrick, his new family and the media portraying my family, especially my parents as abusive and crazy people. It is devastating seeing my parents hurt and suffer from what is being posted about them. It is time for the media and everyone to understand the truth. How can this new family say these things when they weren’t even there? I was. It is time for the world to know Patrick is continuing to play the victim. I never wanted to do this, but it is whats right. If Patrick was the same person he used to be, then he would see it too. I don’t want your money or anything from you. None of my family does. The money your [sic] earning is based off lies. Money is not everything. At the end of the day, your character is what counts. The character you are living Patrick Reed, is not how OUR parents raised us.

4. In the Book Slaying the Tiger, Shane Ryan Reported Patrick’s Parents Were Concerned by His Rage & Lack of Humility

The book Patrick’s wife, Justine, mentioned in the above Facebook post is likely Shane Ryan’s Slaying the Tiger: A Year Inside the Ropes on the New PGA Tour. In an excerpt from the book, Ryan noted Patrick’s parents were concerned about a few of his personality traits that emerged from their son, one was his capacity for rage.

Two of Patrick’s dominant personality traits emerged early, and both worried his parents, Bill and Jeannette. The first was his incredible capacity for rage. He expected so much of himself that when he went into a slump, he’d transform into a sullen powder keg of frustration and anger, to the point that his parents wondered whether or not he was truly enjoying the sport. Reed always told them he was, but his emotional explosions painted a different picture.

According to Slaying the Tiger, another thing that concerned them was his lack of humility.

The other problem was his outward shows of confidence, which crossed over into a cocky, arrogant tone too often for Bill’s liking. He knew his son’s success somewhat depended on this self-assurance, but when Patrick introduced himself to strangers by saying things like, “I’m Patrick Reed, and I’ll kick the shit out of you at golf any time you want,” Bill also knew he had a problem. The issue was that Patrick’s obsession was all-consuming—he had no other interests, and though it made him one of the best juniors in the country, it also meant that his self-worth was entirely wrapped up in the game. Combined with a natural arrogance and a snarly demeanor, he had a knack for bad first impressions.

But what was the solution? The difficulty, according to his parents, was that while they tried to keep him humble, everyone around them was telling Patrick how great he was.

Jeannette called Shane’s writing a “web of lies” in a September 2017 tweet.

“Really Shane Ryan SMH, I know personally ur writings r a stretch of the truth in ur web of lies,” Jeannette tweeted.

Shane Ryan also wrote an article for Deadspin that included some background content on Patrick’s parents. According to Deadspin, Legacy Agency, who represents Patrick, contacted The Augusta Chronicle to demand a video interview (likely the one above) be taken down. The video was conducted in 2013, and Patrick’s parents only said positive things in the interview.

The Augusta Chronicle declined to take the video down. Here’s the excerpt from Deadspin which also reported Justine hired a bodyguard to protect her from Patrick’s parents.

When the Augusta Chronicle, ignorant of the longstanding rift, ran a tame video interview with Bill, Jeannette, and Patrick’s younger sister Hannah after his win at the Wyndham Championship, sources told me that the Legacy Agency, which represented Reed at the time, requested that the video be taken down. The matter died when the Chronicle refused to capitulate, but the gesture shows how strained the relationship must be. In 2014, at several tournaments, independent sources told me that Justine hired at least one bodyguard to ‘protect’ her from Bill and Jeannette. 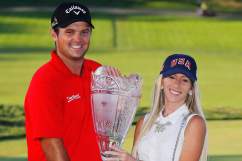