Getty Buffalo Bills running back LeSean McCoy was accused of domestic violence in a graphic Instagram photo posted by his girlfriend's friend.

Bills running back LeSean McCoy has been involved in a heated legal battle with his ex-girlfriend, Delicia Cordon, as he has tried to have her removed from a home in Alpharetta, Georgia, that he owns, court documents obtained by Heavy show.

Cordon’s friend, Mia Boykin, posted a graphic photo on Instagram on Tuesday accusing McCoy of injuring Cordon and of child abuse, animal abuse and steroid use. The photo shows a bloodied and bruised Cordon in what appears to be a hospital bed. McCoy has denied all the accusations. TMZ reports that EMTs did respond to the Alpharetta street where Cordon is living on Monday, but authorities would not provide any other details, including whether a criminal investigation is underway.

The home is listed in court documents as being in Alpharetta, but a records search shows the home is actually in Milton, Georgia. The street appears to be split between the two Atlanta suburbs.

The court filing from June.

On June 6, Tamarcus “TJ” Porter, McCoy’s friend and a fellow former University of Pittsburgh football player, filed a proceeding in Fulton County court against Cordon on McCoy’s behalf. The court document stated, “defendant is ex-girlfriend of owner/plaintiff and refuses to leave.” The filing also requested that Cordon, “return any/all items removed from the premises.”

Porter, who spelled McCoy’s first name wrong incorrectly in the filing, was accused along with McCoy of assaulting two off-duty Philadelphia police officers during a bar fight in 2016. McCoy, Porter and another friend were not charged, but are facing a lawsuit.

The June 2018 filing was the second attempt to have Cordon removed from the home by McCoy. In July 2017, McCoy said in a court document that he was “no longer in a relationship” with Cordon, but had allowed her to “live rent-free” in his home for five months. That case appears to have been dropped, but it is not clear if McCoy and Cordon reconciled and began to date again.

Cordon’s attorney, Tanya Mitchell Graham, filed a document responding to McCoy’s complaint on June 22. Graham wrote that Cordon and her minor children, including her 16-year-old son, have lived at the Alpharetta home with McCoy since October 2016. She said Cordon and McCoy had been in a relationship for at least two years.

On June 1, while Cordon was out-of-state, her attorney says McCoy had his friends, family members and laborers remove her furniture and furnishings from the Alpharetta home without her knowledge. She saw this taking place on security cameras and called the police. Officers arrived and stopped the removal of her belongings, her attorney says. Cordon’s attorney says McCoy then had the electricity turned off on the home.

Cordon’s attorney says McCoy never asked Cordon or her children to leave the home. You can read the court documents below:

According to court records, a hearing on the case was scheduled for Tuesday, July 10, but Cordon’s attorney filed an emergency request for it to be rescheduled because her mother was in the hospital. An August hearing date was set.

The caption reads “@shadymccoy is THE DEVIL!!! YOU ARE AN ANIMAL!!!!!! We didn’t say anything about how you beat your dog “Henny” into kidney failure. Let’s not talk about all the times my best friend had to stop you from VICIOUSLY beating your son for small things like peeing in the bed. We kept quiet about your drug usage … all the ILLEGAL steroids and needles you were using, but we will not keep quiet about this!!!!!! I can’t believe you did this to my best friend!!!!! YOUR KARMA IS GOING TO BE SO REAL!!!!!! The world needs to know what type of animal you really are!!!!!!! This was just her yesterday on the left and now this morning this is her on the right!!!! #WomanBeater #AnimalAbuser#ChildAbuser @nfl @tmz_tv @buffalobills”

Another friend added more details in a Facebook post. Cecily Billups wrote on Facebook, “Sending dudes in her house to pistol whip and rob her!! For what?! Now the world knows what we know!!! You will pay for this.. You will NOT get away with this.”

“For the record the totally baseless and offensive claims made against me today on social media are completely false. Further more, I have not had any direct contact with any of the people involved in months,” McCoy wrote on Instagram.

ESPN reports the Bills are aware of the accusations and looking into them. The NFL has not commented.

Cordon’s attorney, Tanya Mitchell Graham, released a statement Tuesday night. Her attorney said Cordon had returned home on July 9 from a trip to London. While she was sleeping in the home she has shared with McCoy, Cordon “was physically assaulted” by a “male assailant who entered the home with no signs of forced entry. The assailant demanded specific items of jewelry that had been previously gifted to Ms. Cordon by Mr. McCoy, which Mr. McCoy had requested back on many occasions. In fact, after Ms. Cordon refused to return her jewelry gifts to Mr. McCoy, he would often to suggest to Ms. Cordon that she could be robbed because the jewelry was expensive.”

Cordon’s attorneys say her wrist was bruised because the assailant could not get the bracelets off of her. Her attorney also said she was hit “in the face with a firearm multiple times,” while the attacker was “demanding specific items of jewelry and cash from her.” Cordon suffered “multiple injuries to her head, face and arms during this horrendous attack,” her attorney said. Her cousin was also at the home and she was hit in the back of the head by the attacker’s gun, Cordon’s attorney said.

“Due to an ongoing criminal investigation into this incident, Ms. Cordon will have no further comment at this time,” her attorney said.

And this from the attorney for Delicia Cordon this evening. pic.twitter.com/pvcOUUxJyB

Jacoby Hudson, an attorney who has represented McCoy in the eviction proceedings, told the Rochester Democrat and Chronicle that he had spoke to the NFL star and he adamantly denied the accusations. McCoy told Hudson he has been in Miami and has not been in Georgia for weeks, the newspaper reports. He also said he had surveillance cameras in the Georgia home, but Cordon removed them, according to the Democrat and Chronicle.

The Milton Police Department said in a statement that officers “responded to a home invasion at a residence on Hickory Pass near the Cherokee County line. The preliminary investigation indicates that this residence was specifically targeted by the suspect or suspects, and not a random incident. When officers arrived they found one victim who had been physically assaulted by a lone intruder. During the altercation, the suspect demanded specific items from the victim. An adult female victim was treated and released at North Fulton Regional Hospital. A second adult female victim also sustained a minor injury during the incident.” 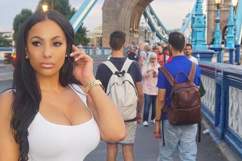