Twitter users uncovered Ok’s offensive tweets (first reported by BlackSportsOnline) after she commented on the standing ovation that Milwaukee Brewers pitcher Josh Hader received from his home crowd following his own situation with racist tweets.

After digging through her old tweets, Twitter users were quick to point out the hypocrisy of Ok’s simple but clear commentary on Hader’s standing ovation. Ok scrubbed her old tweets, but as many have come to say, “the internet is forever.” Naturally, plenty of Twitter users took screenshots of the tweets before she could delete them.

Ok’s collection of offensive tweets dates back to 2009 and goes into 2012. Insensitive tweets after 2012 have not been uncovered.

She also made xenophobic and racist statements against asians in a number of tweets.

Ok Has Since Apologized & Says She Doesn’t Have “a Single Racist, Homophobic or Bad Bone” in Her Body

Ok apologized for the old tweets, saying that they don’t reflect her views. She also said they were “taken out of context.”

After she posted her initial apology, Ok expanded on it in a separate thread:

I’ve gotten a lot of messages w/ questions and it’s impossible to respond to everyone. Those old tweets were not meant in a hateful way or to bash anyone. They were not my words. They don’t reflect my thoughts or beliefs. That’s the truth.

Ok currently writes for USA Today’s Baltimore Ravens section, Ravens Wire. Her last published article went up on June 16. At this time, neither USA Today or Ok has addressed her old tweets, though she has gone back and deleted them.

On her website, Ok says she has been “seen/heard” on many websites including BarStool Sports, Bleacher Report, Deadspin, Fox Sports, Sports Illustrated, and Yahoo Sports.

After Carolina Panthers quarterback Cam Newton insinuated that she couldn’t understand football because she was a woman, many people came to Rodrigue’s defense. Shortly after her interaction with Newton, racist tweets from Rodrigue’s youth surfaced. Rodrigue was quick to issue an apology. 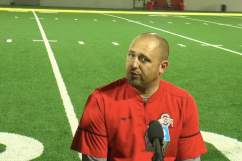