Baker Mayfield does not have a wife yet, but that is about to change as he is engaged to girlfriend Emily Wilkinson. After rumors started circulating that Mayfield proposed, the new Browns quarterback posted a series of Instagram photos to confirm the news.

“Can’t wait to do life with the most perfect girl. Emily Wilkinson, I love you,” Mayfield posted on Instagram.

Can’t wait to do life with the most perfect girl. Emily Wilkinson, I love you.

According to TMZ, the couple was first spotted together in January as they attended a Los Angeles Clippers game. Mayfield had previously been linked to Morgan Mayberry, but Mayfield stopped posting photos with Mayberry during the 2017 season at Oklahoma.

Mayfield’s Girlfriend Quit Her Dream Job to Move to Cleveland

Emily Wilkinson has only been dating the Cleveland Browns QB for a couple of months — but clearly, she feels the relationship is serious enough to move with him for his new job.

But that means, she’s quitting her own job — as a patient coordinator at a fancy plastic surgery center in Beverly Hills.

“I’m excited to say I’m only leaving Galanis Plastic Surgery because I’ll be starting a new adventure with this guy in Cleveland,” Emily said.

She called the move “bittersweet” and said the surgery center has been her “favorite job ever.”

Wilkinson formally announced her move to Cleveland on Instagram.

“I’m leaving beautiful California tomorrow morning to head to my new home in Ohio. It’s hard to temporarily say goodbye to LA, but I can’t wait for this new adventure!” Wilkinson posted.

Wilkinson Is Settling in to Cleveland

First NFL game in the books… and it was a W! Way to go @clevelandbrowns ?? #GoBrowns

Wilkinson had a nice start to her time in Cleveland with their engagement. She also posted a photo on Instagram with Mayfield’s family after he made his NFL preseason debut. A month after their engagement, Wilkinson posted a lengthy Instagram post about their relationship.

“I was about to say @bakermayfield made me the luckiest girl in the world one month ago today…. but that’d be a lie. I knew I was the luckiest girl in the world the day I realized I was madly in love with him – and that day was long before June 30th. Regardless, cheers to one month of calling you my fiancé. ??♥️love you most baby!” Wilkinson posted.

As for Mayfield, he is fighting with Tyrod Taylor for the Browns starting quarterback position. He’s also doing it in front of a lot of cameras, as the Browns are the featured team on HBO’s hit show Hard Knocks. It will be interesting to see how long the Browns keep Mayfield on the bench. Mayfield and Wilkinson have not announced a wedding date. 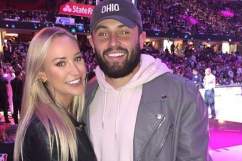