Throughout his long career, which has taken him from Michigan State to LSU to the Miami Dolphins to Alabama, one of his biggest supporters, cheerleaders and most trusted advisors has been his wife of over 45 years.

Read on for more about the First Lady of Alabama football.

1. Terry Has Always Expressed a Desire to Stay in Alabama 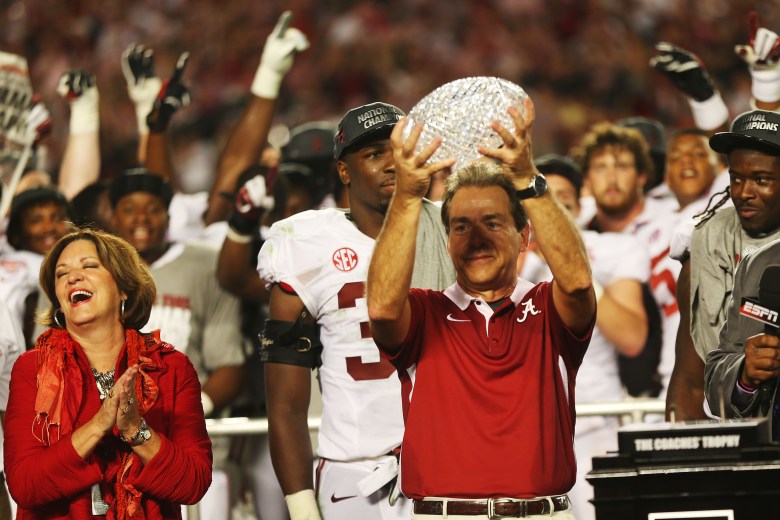 Toward the end of last season, rumors of Nick Saban taking a possible opening at Texas started. However, Terry told the Wall Street Journal the couple wants to end their career in Alabama.

“This is where we are going to end our career.”

While Terry is happy staying at the school, she did mention in that post that she thinks Nick’s level of success has made the fans so used to winning that they are no long as appreciative of his success as she thinks they should be.

“You come to a crossroads and the expectations get so great, people get spoiled by success and there gets to be a lack of appreciation,” Mrs. Saban said. “We’re kind of there now.”

2. Terry Uses Football to Stay Involved in Her Community 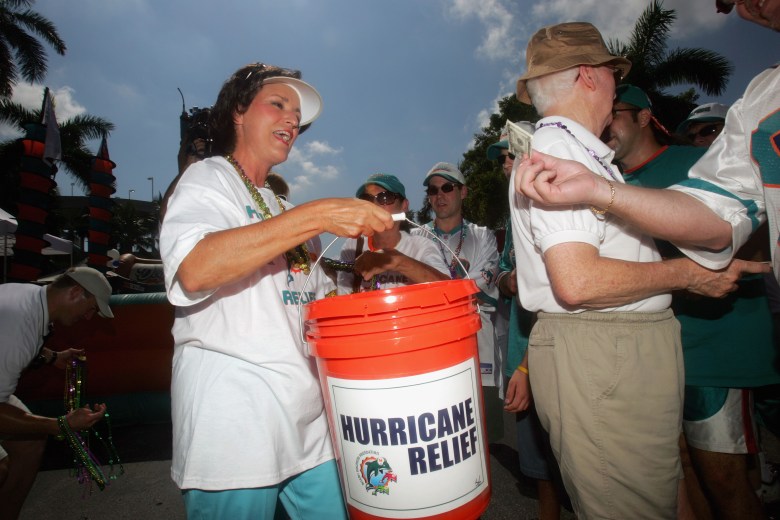 Terry helped in the relief effort after Hurricane Katrina when Nick was coaching the Dolphins in 2005. (Getty)

Both Terry and Nick donate time and money to the communities that support their team.

Their most-known charity group is Nick’s Kids Fund. Since 1998, the Sabans have used it to raise money to help support children, student, teacher and family causes, as well as give community members chances to volunteer. To date, the organization has raised and distributed more than $4 million.

Nick’s Kids Fund also did “15 for 15,” which was building 15 Habitat for Humanity houses to represent 15 national championships.

In 2005, after Hurricane Katrina hit the Miami area, where Nick was coaching the Dolphins, Terry helped in the relief efforts. Along with cheerleaders, former Dolphins’ players and the wives of players and coaches, Terry led a collection effort.

Kristen was in the news in 2012 when a former sorority sister from Alabama sued her for a drunken brawl between the two in 2010. After Kristen was ordered to take psychological tests and an anger managment class by the school, the judge tossed the lawsuit, claiming Kristen was acting in self-defense.

In 2013, Nicholas and his wife, Kelse Laney, had their first child, a boy. He is Terry and Nick’s first grandchild.

Nick and Terry rushed to the hospital when they heard the news and Saban told AL.com:

We actually had a rocking chair over there so I was kinda happy rocking that baby for a little bit. 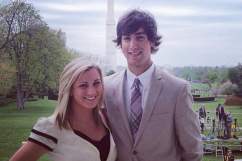 4. Terry and Nick Have Been Married for Over 45 Years

The couple met in seventh grade at a 4-H science camp. The two started seriously dating when Nick was at Kent State and Terry was teaching in West Virginia. The relationship started with Nick sending Terry love letters, and they got married when he came home from school over Christmas break. The Sabans were 21 years old when they wed over their Christmas breaks while in college.

Both Nick and Terry are devout Catholics who only on rare occasions miss Mass. The lovebirdds keep in constant contact throughout the day and whenever Saban flies, he calls Terry before he takes off and as soon as he lands, according to a profile done on him for GQ.

Nick’s assistant forwards Terry all of his incoming emails and copies her on the ones going out.

According to the Wall Street Journal, when Nick was working on his contract with LSU, Terry was in on almost all of the details.

When it comes to recruiting players, Terry told the Journal she’s just as involved as Nick.

“The only thing we use the dining room table for is recruiting,” she said.

Alabama wide receiver Chris Black was quoted in the Journal article saying Terry has more control than Nick does:

Chris Black, an Alabama wide receiver, said Saban often jokes that Terry makes all of the important decisions. “She kind of wears the pants,” Black said.