Clemson’s running back Travis Etienne credits his family and his Louisiana hometown with helping him get to where he is today. The Tigers star is playing in the National Championship game with the support of his parents, Donnetta Etienne and Travis Etienne Sr., and his four siblings, along with everyone else in Jennings, a town of just about 10,000 people.

Etienne, a sophomore, was highly recruited, but settled on joining the Clemson family, despite growing up as a fan of LSU football. The speedy back has now made South Carolina his second home, but his family remains close to his heart.

Here’s what you need to know about Travis Etienne’s parents and family:

1. Travis Etienne’s Mother Is a Nurse & His Father Is Works in the Oil Industry

Travis Etienne was raised by his parents in the small city of Jennings in Jefferson Parish, Louisiana. His mother, Donnetta Etienne, is a nurse, according to her Twitter profile. His father works in the oil industry for a well service company.

Etienne is close to his family, according to ESPN:

There’s a routine for the Etienne family on every game day. Everyone gathers around Donnetta’s phone — Mom, Dad, two older sisters and Travis’ younger brother, Trevor — to offer good-luck wishes via FaceTime.

Then, during the action, they’re focused on every play, a family of athletes analyzing every run lane or pass block. Trevor will holler at refs or the opposition or, sometimes, at Travis, if the need arises. And then when it’s all over, when they meet outside the stadium and share a few hugs, the critique begins.

‘We’re the biggest fans and the worst critics,’ Donnetta said. ‘We tell them at home so nobody has to tell them on the street.’

The younger Etienne is now a hero in his hometown. According to the Charleston Post and Courier, a trip home for the holidays now means taking photos with his fans.

“When Etienne was Christmas shopping earlier this month with his sisters at the local mall, he was bombarded by autograph and photo requests. At Clemson, his classmates are now fully aware of who he is and have no issues asking for a quick selfie,” Grace Raynor wrote in the Post and Courier in 2017.

His mother told the Greenville News, “Football, that was his gift that God used. It changed a lot of how they see the area, how they view the area. It made our community whole. Travis became like a community kid. He was the hope and the light for the whole community.” 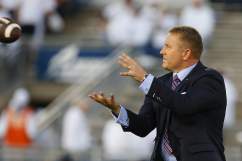 2. He Has a Brother, Trevor, & 2 Sisters, Danielle & Shanea, Who Are All Athletes

Travis Etienne with his siblings, nieces and nephew.

Travis Etienne is one of four children. He is also the uncle of two nieces and a nephew, according to his mother’s Instagram page. He has two sisters, Danielle and Shanea, and a younger brother, Trevor Etienne.

“I got to live up to those standards,” Trevor told SI. “I don’t have a choice.”

His sisters, Shanea and Danielle Lyons, both won championships in track and basketball while in high school, according to SI.

3. When Clemson Was Recruiting Etienne, the Running Back’s Family Brought Dabo Swinney to Meet His Grandmother to Get Her Approval

When the Clemson Tigers were recruiting Travis Etienne, there was one key person the coaching staff had to convince: his grandmother, Cynthia Beverly. According to Sports Illustrated, it was Beverly who got Travis started in football.

“Travis is a momma’s boy, and when Donnetta would leave for work little Travis would race out of the house after her car,” Ross Delligner wrote in SI in December 2018. “His grandma, Cynthia Beverly, soon found the only way to placate the young boy was by handing him a football. A normal site at the Etienne home was a football-toting Travis climbing over, around and through furniture, his toddler brother following his every move while their parents were at work.”

When Dabo Swinney came to Jennings to recruit Etienne, he got to meet Beverly.

“When Coach Dabo came in, I was like, ‘I’m the only child, so we’ve got to take him home to Grandmother,'” Donnetta Etienne, Travis’ mother, told The Advocate. “So we brought him home to mama, to my mama. If he got Travis’ grandmother’s approval, he sold Travis.” 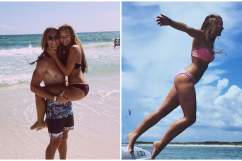 4. His Family Is of Louisiana Creole Descent & He Keeps His Refrigerator at Clemson Stocked With His Favorite Cajun Foods From Home

Etienne’s family is of Louisiana Creole descent and he keeps his favorite Cajun foods close to him while at Clemson.

“Etienne keeps his college freezer stocked with favorites his family brings him from back home: green beans, turkey necks, red beans, navy beans and, of course, boudin,” according to SI.
When he gets home, he eats too much, Etienne’s dad has joked.

“My grandma made me crawfish etouffee. Then I had fried catfish, for Christmas I had gumbo, I went to Darrell’s and had their surf and turf, and I just hit all the regular spots,” Etienne told the Post and Courier. “I ate Popeye’s like, three times. My dad was just so mad because I was eating so much. But I had to get it all in.”

5. Etienne’s Mother Has One Rule for Her Kids: If They Do Their Chores & Keep Up Their Grades, They Can Have Anything They Want

So far, Travis is doing everything right in his mother’s eyes. She told the Greenville News, “I’m just happy about the man he’s becoming,” Donnetta Etienne said. “I’m also happy about the way we get to watch it. The whole world gets to see what we already knew. I get to see him becoming a complete man right before our very eyes.”

She told ESPN that after Clemson’s loss to Alabama last season, “We told him he was our hero no matter what. We told him that, a year ago, he’d been watching this game in our living room. How cool is that?”