Trevor Bates, a linebacker for the Detroit Lions who won a Super Bowl with the New England Patriots, faces several charges after police said he assaulted an officer in New York City.

Bates, 25, was arrested early in the morning on January 26, 2019, in Queens, New York. According to Queens County District Attorney Richard Brown, the arrest stemmed from Bates’ refusal to pay $32 for a taxi ride. Bates was taken to a hospital for a psychiatric evaluation following the incident.

1. District Attorney: Bates Was Arrested After Refusing to Pay a Taxi Cab; Bates Allegedly Punched a Police Officer in the Face at the Precinct

Trevor Bates was visiting New York City on Saturday, January 26, 2019. According to a news release issued by Queens County District Attorney Richard Brown, Bates was staying at a Hampton Inn on Ditmars Boulevard near LaGuardia Airport.

Bates took a taxi from Manhattan to his hotel after midnight on January 26. The NFL linebacker allegedly refused to pay the driver the $32 for the ride. The taxi driver called police around 1:30 a.m.

Officers responded and placed Bates under arrest. He was taken to the 115th police precinct, where an officer told Bates that “as long as there were no outstanding warrants, he would receive a DAT (desk appearance ticket) and then be allowed to leave.”

Bates reportedly became “increasingly agitated” and refused to have his fingerprints taken. Sergeant James O’Brien tried to intervene, but Bates reportedly punched O’Brien in the face. The district attorney said that officers used a taser on Bates “in order to subdue him.”

2. Bates Faces Up to Seven Years in Prison if Convicted on a Felony Charge; The Officer Was Treated for a Concussion & Required Stitches

If convicted, Bates could get probation or face up to seven years in prison. The assault charge is a felony.

Sergeant O’Brien required three stitches over his eye. He also suffered a concussion from the assault.

Bates was taken to Bellevue Hospital for a psychiatric evaluation. As of January 30, Bates was not listed in New York inmate records, indicating he may still be at the hospital under observation. He has not yet been arraigned on the charges.

Bates’ agent, Jeff Jankovich, released a statement about Bates’ condition following the arrest. He stated that Bates’ family members were very concerned because the behavior was “not at all consistent with the man and friend we know him to be.” Jankovich went on, “Since entering the NFL in 2016, Trevor has demonstrated a genuine passion for serving his community in various charitable and outreach capacities. He understands the powerful platform that comes with being a professional athlete, and his actions this weekend are in no way a reflection of who he is as a person.”

3. The Detroit Lions Issued a Brief Statement Acknowledging the Arrest

Bob Quinn, the executive vice president and general manager of the Detroit Lions, issued a brief statement on January 26 on behalf of the organization following Bates’ arrest. The statement read:

“We are aware of the arrest of Trevor Bates earlier today in New York. We have not spoken to Trevor as of yet and are still in the process of gathering more information. The Detroit Lions will have no further comment at this time.”

Bates joined the Detroit Lions on May 23, 2018, after being released from the Giants the previous year. The Lions waived him in September of 2018 but then signed him to the practice squad two days later.

Trevor Bates acted beyond that of a wild animal. He refused to be fingerprinted, showed disdain for the officers & decided to punch a Sgt in the face. Fighting with officers he was tasered & ripped the taser prongs from his body. He’s dog crap and the NFL condones criminals. https://t.co/sAd9rMKWHb

“Trevor Bates acted beyond that of a wild animal. He refused to be fingerprinted, showed disdain for the officers & decided to punch a Sgt in the face. Fighting with officers he was tasered & ripped the taser prongs from his body. He’s dog crap and the NFL condones criminals.”

5. Bates Played for the University of Maine & Was Drafted in the Seventh Round by the Indianapolis Colts in 2016

How awesome to have several Detroit Lions sponsor Prison Fellowship's Angel Tree kids this past Christmas! Linebacker – Trevor Bates, whose father is incarcerated, helped coordinate this effort & enlisted the help of some team mates for the AT party in Detroit. @Lions pic.twitter.com/1qRuMh2G0A

Trevor Bates is a native of Maine. He attended Westbrook High School before going on to the University of Maine. He played in 46 games during his college career and was named All-CAA first team after his senior season. Bates earned a bachelor’s degree in physical education.

Bates’ former college coach, Jack Cosgrove, told the Press Herald that he was stunned to hear of Bates’ arrest and the allegations against him. “This is not the Trevor I ever knew or saw. He’s one of those great self-made man stories… He’s exactly what a coach wants out of a player.”

Bates entered the NFL draft in 2016. He was picked by the Indianapolis Colts in the seventh round. His next team was the New England Patriots, where he won a Super Bowl ring. The Patriots released Bates in September of 2017; one month later, he signed with the New York Giants. The Giants released him in December 2017 and Bates’ next move was to the Detroit Lions. 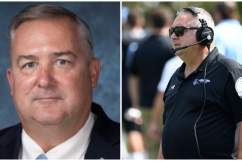